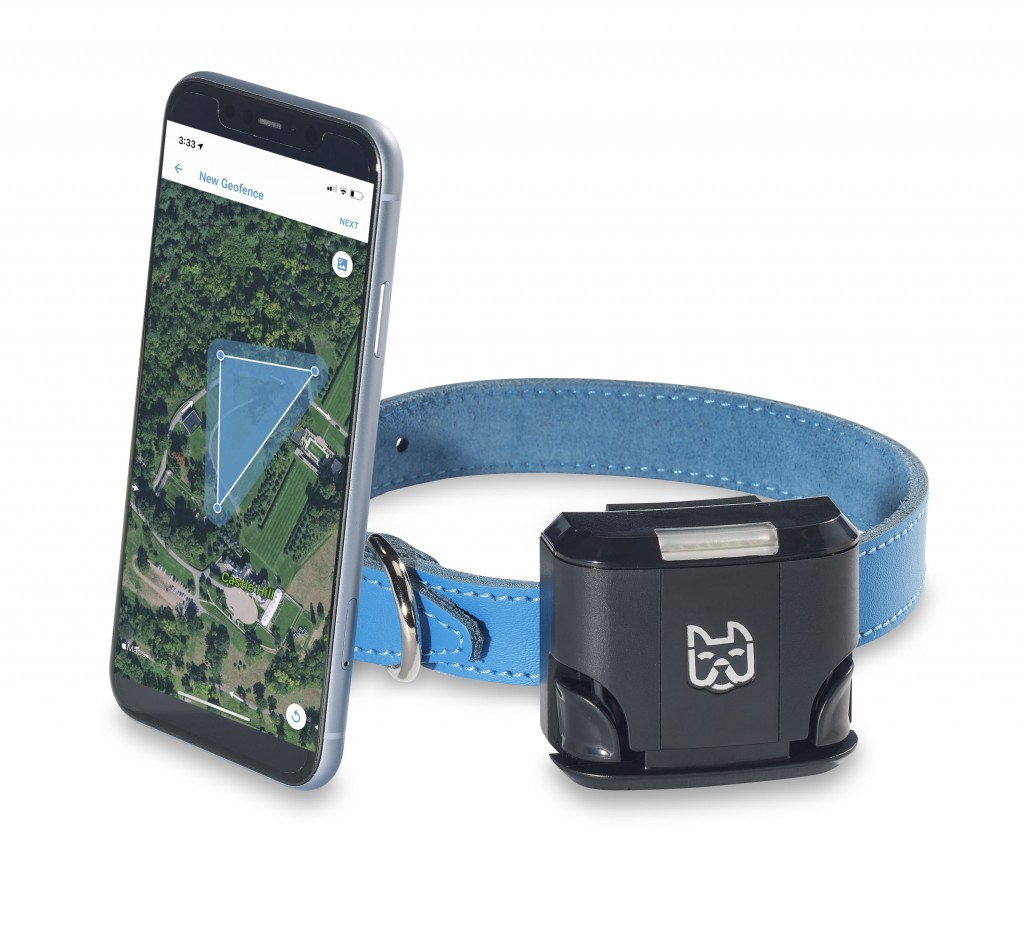 With the Wagz Freedom Smart Dog Collar, an owner can not only create a geofence in which to keep the pet but also monitor certain data to create what the company calls a Health and Happiness Score for the dog. (Courtesy photo)

“Build a better mousetrap,” Ralph Waldo Emerson wrote in the late 19th century, “and the world will beat a path to your door.” It’s what entrepreneurs endeavor to do.

For Terry Anderton, it was the need to build a better dog collar. And, as a result, investors and a merger with a manufacturing company to streamline and strengthen production have beat a path to his door.

“I tried to solve my own problem,” said Anderton.

The aha moment for Anderton, a Seacoast-based entrepreneur who has been involved in several tech companies over the years, was the time in 2015 his Akbash breed dog Abby went missing during a family July Fourth get-together in North Hampton.

Spooked by nearby popping fireworks, Abby bolted for the woods. “It literally took me five days to find her,” said Anderton.

Promising himself and his family that he wouldn’t let that happen again, he went in search of a means to keep Abby from running away again. He didn’t like what he found, concluding the electric-fence type solutions and GPS trackers were what he described as “antiquated”.

“They were still selling shock collars that go around the dog’s neck and wires you have to bury in the ground, or they just had GPS trackers, which doesn’t do you any good. If your dog runs away, sure, it tells you where your dog is, but it doesn’t contain your dog,” said Anderton.

So he built his own better mousetrap, as it were, which ultimately became the Wagz Freedom Smart Dog Collar.

Using an app on your phone that is paired with the collar around the dog’s neck and operating on the phone cellular network, you can create a geo-tagged ‘fence’ in which the pooch can roam. As it approaches the fence boundary, a vibration, audible tone, and ultrasonic tone remind the dog not to proceed any further.

This is a learned response that you can easily teach your dog, according to Anderton.

“When you bring them to the border where the geofence is and the vibration occurs and the ultrasonic sound, you pull them back towards the middle and you have them come to the middle,” he said.

“Once they’ve learned that they need to turn and go back to the middle, then dogs are amazing. Abby, at this point I don’t even need to put the collar on; she won’t violate the geofence. And this dog was the most unruly, headstrong dog in the world,” he added.

The collar has GPS tracking ability and it can collect certain health data, much like a fitness band measures distance, calories burned, heart rate, sleep and the like.

“We’ve created something we call the Health and Happiness Score.” said Anderton. “Essentially, we’re using Alexa and giving your dog reports. You can say: ‘Alexa, how did Abby do today, and Alexa will respond: Abby had a great day; she walked three miles, slept eight hours,’ that kind of thing.”

With a business background from college, Anderton worked for and founded companies that included Change Dynamics, Trunity and Gemr before becoming the founder and CEO of Wagz in 2015. He has 26 full-time employees working out of offices at 100 State St., in downtown Portsmouth.

One of the challenges of a startup is getting the product made, so Anderton needed a manufacturer to put the Wagz collars together and ship them.

“One of the challenges for a company like mine is that the supply chain is a killer especially right now,” said Anderton, noting that the COVID-19 pandemic is responsible for slowdowns all over the world in getting products from manufacturers to retailers. “We have to tie up so much cash for so long before we can actually turn it into a sale. Right now the lead time can be as long as six months on parts.”

Anderton reached out to his contract manufacturer – SigmaTron, based in Illinois and an electronic manufacturing services company that provides printed circuit board assemblies and completely assembled electronic products.

“We went to them and pitched the idea of merging with the understanding that we could create a completely vertically integrated company. We really unlocked a lot of value, because contract manufacturers historically trade for a very low multiple compared to companies like mine, technology companies which trade for very high multiples. So we’re hoping that the combination of the two really unlocks shareholder value for them and for us,” he said.

While SigmaTron will continue to be a manufacturing services company, “we do believe that Wagz offers an exceptional opportunity for both companies in dynamic and growing markets,” said Gary Fairhead, SigmaTron’s president and CEO.

“The pet tech market has continued to grow as projected by market analysts and the pet space remains active and robust. The pandemic has increased pet ownership worldwide, creating greater opportunities for the products that fall under the Wagz strategic vision,” Fairhead added.

The merger gives Wagz the efficiency it needs in its manufacturing process and the recognition it needs in the marketplace. According to Anderton, SigmaTron secured capital backing of $15 million from investment banker JP Morgan Chase. “We’re well funded and well positioned to really scale at this stage,” said Anderton.

SigmaTron in a mid-year financial report said of its acquisition of Wagz: “We continue to believe the upside is significant for the stockholders of SigmaTron.”

The pet dog market has soared as the pandemic and its home-bound lockdowns spurred adoptions. “We don’t see that slowing down at all,” said Anderton, citing statistics that some 12 million dogs go missing or get struck by a vehicle every year.

The Wagz collar is available from such retailers as Walmart, Tractor Supply and Target. As well, it is available through the Wagz website, a preferable method for Anderton because the company can develop a more personal relationship with the owners and their dogs.

When he talks about the relationship, Anderton terms it as humanizing the connection between owner and dog.

“People want to stay connected and they want to feel like their dog is happy. We’re tapping into all that. This product covers all that. It’s truly the humanization of pets; they truly believe that their dog is their child,” he said.

Ashoka U co-founder named UNH Social Innovator of the Year