From economy to workplace, a review of their stances

Amid the noise over groping and emails, it’s hard to hear the candidates’ economic positions this election season. But they are there, sometimes surprising, and often sharply distinct.

That’s why NH Business Review is providing a brief overview of the positions of the two statewide federal races – for president and U.S. senator – on several issues important to New Hampshire and its economy, with occasional commentary from two New Hampshire economists – Russ Thibeault, president of Applied Economic Research of Laconia, and Brian Gottlob, principal of PolEcon Research in Dover.

Donald Trump might be engaged in trade as a businessperson – building his projects with Chinese steel, for instance – but the last time any candidate backed protective tariffs was before the Great Depression in the 1930s. Hillary Clinton has generally favored free trade, at one point

calling the Trans Pacific Partnership the “gold standard” of trade treaties when she was secretary of state, before coming out against it (as it is currently written) to blunt Bernie Sanders’ primary challenge.

In the Senate race, although Gov. Maggie Hassan has been a strong supporter of trade missions as governor, she has come out against the TPP deal. U.S. Sen. Kelly Ayotte has voiced support for the TPP and in 2015 voted, along with U.S. Sen. Jeanne Shaheen, to fast-track presidential trade deal negotiating authority.

There is no question that trade has had a major impact on the state’s economy, yet it is hard to pin down its effect on employment.    How many of the state’s 18,500 jobs supported by trade are due to trade agreements like NAFTA? And how many of the manufacturing jobs lost in the period was due to them? The only documented statistics reflecting job loss are claims of workers who applied for specific benefits due to offshoring, but the number is probably greater than that. Then again, even if the loss were ten times as large, it would still be less than a third of the jobs supported by trade.

Would those jobs have fled anyway to places with cheaper labor and fewer regulations?

“Trade is good for the most workers except to those who lost their jobs, and we are doing a lousy job retraining and compensating them,” said Russ Thibeault, economist with Applied Economic Research.

Trump has not only urged building a wall to prevent undocumented border crossings, he also favors deporting those who are here, particularly if they had ever committed a crime. He also calls for “extreme vetting” of immigrants, making it harder for people to enter the U.S., particularly from Muslim countries. Clinton favors comprehensive immigration reform with a pathway to citizenship, and has pledged to create a national office of immigrant affairs, and favors letting Syrians in, saying the vetting is adequate.

Ayotte broke with the conservative wing of her party to support a bipartisan immigration reform compromise.   Hassan broke with the liberal wing of her party when she agreed with Trump and many Republican governors in halting immigration of Syrian refugees until they could be more fully vetted. In the past, however, while a member of the NH Senate, she voted against a state law that would outlaw sanctuary cities.

New Hampshire’s illegal immigrant population is relatively small – though even removing 10,000 people would have a substantial impact, but so would making it more difficult to get here legally, since many of the immigrants who work here are professionals and business owners.

Immigrants also have helped alleviate the labor shortage that is plaguing many New Hampshire industries, particularly in an aging state, that is no longer attracting workers from Massachusetts.

“We have had a net outmigration domestically,” said Brian Gottlob, president of PolEcon Research in Dover. “But it has been offset by a net in-migration internationally.”

On infrastructure, Trump sounds more like Bernie Sanders than Clinton does, at least when it comes to the amount of money he wants to spend, but less so when it comes to mapping out a detailed proposal. None of the candidates advocate increasing the gas tax.

More differences emerge on the question of commuter rail, nationally and locally. Rail is one of the last items on Clinton’s list, and she doesn’t mention high-speed rail, one of President Obama’s pet issues. However, Trump favors high-speed rail, which is contrary to most elected Republicans, including Ayotte, who has said it’s a waste of money and that expansion of Interstate 93 should have a higher priority than commuter rail. Hassan strongly supports commuter rail, however.

New Hampshire is smack in the middle on CNBC’s 2016 list of the states most friendly to business, but when it comes to infrastructure, the Granite State is ranked next to last.

In 2013, the American Society of Civil Engineers gave the state a “C” grade for infrastructure based on 2011 data with rail and roads getting a “C-”.

As for rail, the 2014 NH Rail Transit Authority study said it would cost $120 million to bring rail to Nashua, and about twice that much to get it to Manchester, creating about 350 construction jobs, and 2,460 related to real estate development. Skeptics see that as an awful lot of money per job, but Gottlob said such studies don’t measure the intangibles, which he experiences in Dover, which has a stop on Amtrak’s Downeaster.

“If you are looking to attract Millennials, which is soon to be the largest segment in the workforce, you need to have the cache. We are not on the winning end of demographics, so we have to make these areas more attractive,” said Gottlob.

On paid family leave, Clinton supports setting up a system similar to unemployment insurance, with employees or employers, or both, paying into a fund that would provide a percentage of a workers’ pay if they take family leave. Hassan supports “expanded paid family leave,” but does not offer specifics on her website. Last year, Ayotte co-sponsored the Family Friendly and Workplace Flexibility Act, which would allow employers and employees in the private sector to come to agreements by which hourly workers could put overtime earned toward paid leave rather than extra compensation.

Trump agrees that the minimum wage of $7.25 an hour is too low, but would leave it up to the states to increase it.   Clinton would leave it to states to raise it above a federal floor of $12 an hour and the Democratic platform would raise it to $15. Hassan supports a $12 federal minimum, and Ayotte doesn’t support an increase in the federal wage.

While few actually earn the minimum, most studies show that an increase would push up wages for all low wage workers. Last November, NH Business Review questioned whether current wage differential pushed some people to work out of state.

Business groups contend that raising the minimum would result in loss of jobs, but it’s unclear if that actually would happen. The last time the state increased the minimum, from $5.15 to $7.25 in 2008, the Federal Reserve estimated the state would lose as many as 1,500 jobs, less than a fifth of a percent of its workforce. More conservative think tanks, which oppose a minimum wage hike, put job losses far higher, at 4,000 if the wage is increased to $12 an hour (the Employment Policy Institute), and 31,000, at $15 (Heritage Foundation).  But studies in other states that have raised the minimum could not document such an impact. 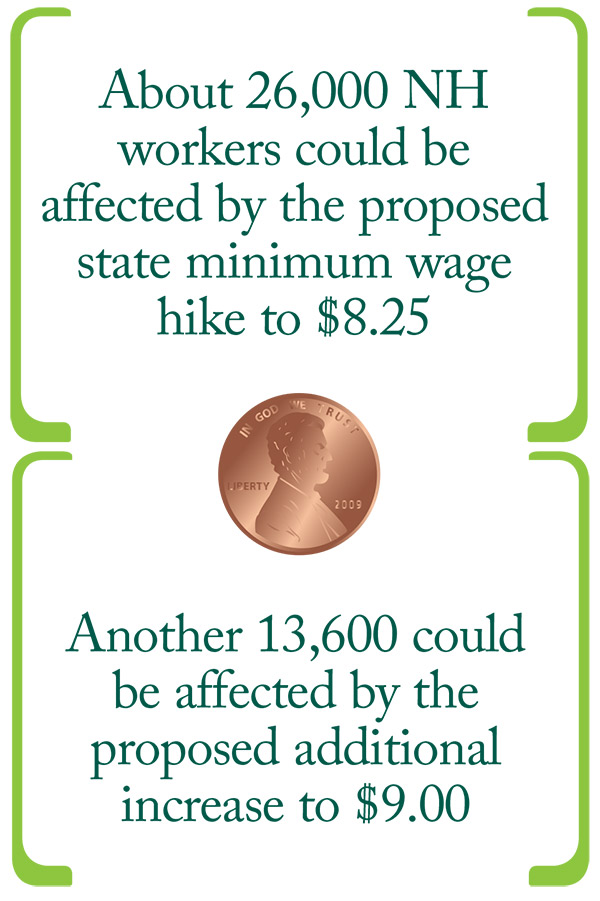 Economists disagree too. Gottlob, who said he would prefer a larger earned income tax credit, said that “a not inconsequential job loss would result,” affecting those on the bottom. But Thibeault called New Hampshire’s minimum wage “almost embarrassing,” and said an increase would push up the wages of the “whole bottom 20 percent in our state,” arguing that a “rising tide lifts all boats.”

There is stark difference between the two presidential candidates on energy policy, with Trump, a fossil fuel advocate, frequently using the phrase “war on coal” to castigate Clinton, who has indeed favored phasing out fossil fuels. Hassan supported clean energy as governor, though her position on Northern Pass has been nuanced. Ayotte’s record on energy is mixed, favoring some high-profile projects nationally while opposing others locally.  She headed up a Republican Senate Energy and Environment Working Group, but had a 35 percent voting record from the League of Conservation Voters, though it was at 56 percent in 2015.

Energy policy has a strong impact in New Hampshire, because of the state’s high energy prices. In addition, climate change is an economic issue as well in the Granite State, with its impact on skiing, tourism, agriculture, and our shoreline.

On the supply side, New Hampshire doesn’t have much interest in coal anymore, with Eversource selling off its only coal plants. But oil is still an important heating source, and natural gas is the major fuel of choice for electrical generation in the region aside from nuclear. Fracking has driven gas prices down, but not as much in New England because of tight pipeline capacity and that drives prices up during cold winters. The Northern Pass is another supply-side solution.

On the demand side, clean tech advocates argue that investments in efficiency and renewables produce a bigger bang for the buck, more jobs and slow down climate change.