When a fee becomes a tax

Every two years, when a state budget is passed for New Hampshire’s next biennium, there is a fervor to enact a budget that includes a vast array of programs and services. In recent memory, these budgets invariably exceed the depths of the state’s coffers. As a result, the state is constantly searching for additional sources of revenue.

Taxes and fees are the government’s two main methods of raising revenue. What’s the difference between them? The answer lies partly in what the revenue can fund.

A tax takes a percentage of a transaction to bring in revenue that is unrelated to the activity being taxed — to fund the government and state activities generally. You pay your property tax bill, providing money for the government to use as it sees fit. A fee is a charge for purposes of funding the related cost of a particular governmental program or service. You pay a small fee to visit a state park, and that cash is used for trail maintenance.

Taxes are subject to constitutional strictures and other legal measures to ensure tax burdens are imposed uniformly, while fees are not subject to such restraints.

Fees, often more politically sustainable than taxes, run the risk of being redirected to backfill budgetary shortfalls instead of being used to defray costs related to a particular program or service. In New Hampshire, a state that is noticeably disinclined to assess new taxes, accumulated fees sitting on a department’s balance sheet or segregated in the state treasury are easy targets.

Because taxes and fees share similar attributes, distinguishing them under the law can be difficult. This is important because New Hampshire has a unique constitutional dichotomy regarding taxes and fees.

The General Court’s power to impose and levy proportional and reasonable taxes arises from Part I, Article 12 and Part II, Article 5 of the New Hampshire Constitution.

Taxes have been defined as “enforced contribution to raise revenue.” Disproportionate taxation cannot survive constitutional scrutiny. In other words, valid taxes are levied ad valorem (as a percentage in proportion to value) on a discrete activity or distinct type of property, destined for appropriation by the state legislature in accordance with its “power of the purse.” 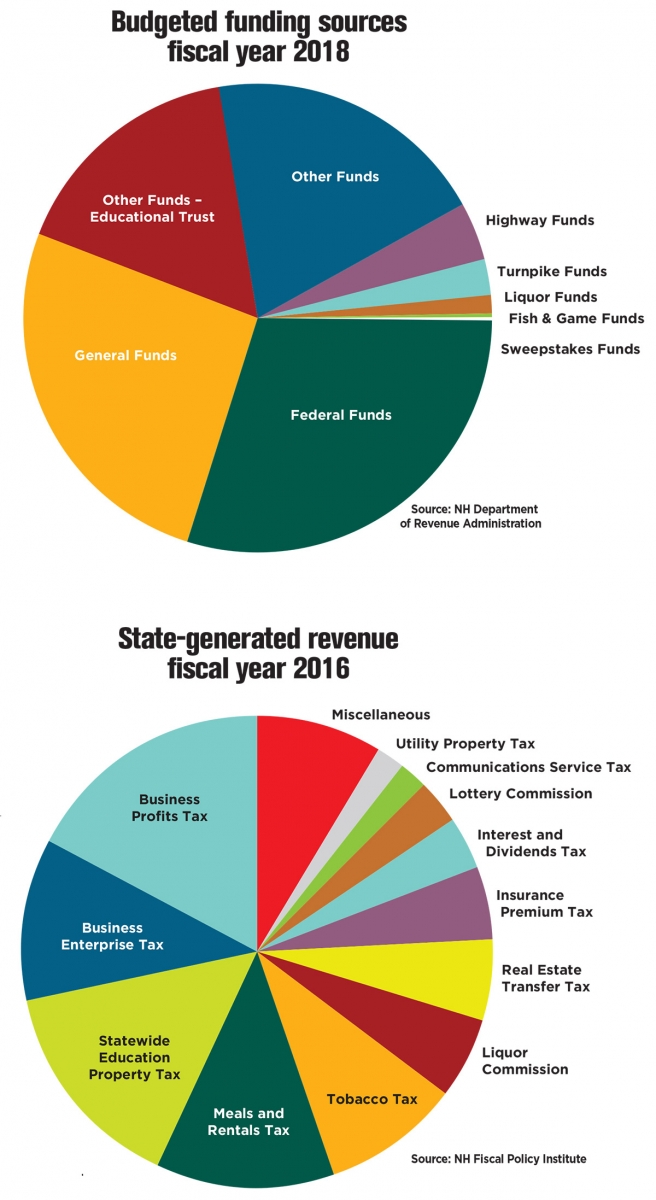 There is no assurance that an individual taxpayer’s tax payments will benefit him or her directly. This is one reason taxes are subject to constitutional strictures and other legal measures to ensure tax burdens are imposed uniformly.

Fees, however, are not subject to such restraints, and are therefore ubiquitous across many varieties of regulatory programs. Under New Hampshire jurisprudence, a fee “must be incidental to the implementation of a regulatory program and not intended to produce additional revenue.” A fee is valid so long as it bears some relationship to, and approximates the cost of, the regulated activity, meaning it cannot be grossly disproportionate to the regulatory expense.

The fee may cover the necessary expense of issuing licenses and other program activity and incidental expenses incurred in consequence of the activity regulated. That licensing fees “produce some surplus revenue does not render the licensing act unreasonable or invalid.” If the fee is implemented by statute, the Legislature’s declared purpose and the statute’s essential characteristics are considered.

Determining the line between a fee and a tax has played out many times in New Hampshire courts. The results vary:

• In American Automobile Association v. State, the NH Supreme Court considered the constitutionality of an amendment to the statute requiring motor vehicle certificates of title resulting in a twofold increase to title fees and diversion of the increase to the state’s general fund.

The court determined that the increase was a fee, rather than a tax, imposed to prevent motor vehicle theft. Unfazed by the comingling of the fee with general funds, the court found sufficient evidence that the entirety of the fee was spent on a range of anti-theft activities and programs at the state and local level.

• In Aranosian Oil Company, Inc. v. State, New Hampshire oil distributors sought reimbursement of fees they paid into the state’s underground oil storage tank cleanup fund. The fund, paid at a rate of 15 cents per gallon sold, was intended to finance cleanup costs associated with methyl tertiary butyl ether (MBTE) spills. The state realized $372 million in settlements and judgments from oil suppliers and refiners in unrelated MBTE tort litigation. Oil distributors, which had paid $29 million into the fund but only received $15 million in reimbursements for cleanup costs, then filed suit. They alleged that, because MBTE proceeds were for cleanups already paid for by oil distributors through the fund, the fees collected from oil distributors were no longer proportional to the expense of regulating underground storage tanks and, therefore, constituted an unconstitutional tax.

The NH Supreme Court rejected this argument, holding a fee that is constitutional when paid cannot “be rendered retroactively unconstitutional by the subsequent emergence of an alternative source of funds that addresses the same expense as the fee program.”

• Starr v. Governor provides an example of an unconstitutional tax posing as a “special cost assessment.”

In the case, the state imposed a 5 percent surcharge on the sale price of all items sold in a prison commissary, with the proceeds to be deposited in the state victims’ assistance fund. The NH Supreme Court concluded the 5 percent surcharge was disproportionately applied and therefore could not withstand constitutional scrutiny. The surcharge was not a fee, or a “special cost assessment,” as argued by the state, because the prisoners paying the surcharge did not make use of, or benefit from, the victims’ assistance fund.

Taxes and fees are distinguishable from both a legal and a functional perspective, but their shared purpose — to raise money — makes them both key implements in the state’s toolkit to manage budgetary concerns and fund regulatory activities. That’s why it’s essential to understand how each term is defined.

Based in Nixon Peabody’s Manchester office, Kierstan Schultz and Nathan Warecki are associates in the firm’s commercial litigation practice.