What’s the next step in state budget puzzle?

After the New Hampshire House’s shocking inability to pass a budget, you might think that nothing is going to come out of this Legislature, especially for business.

But if you thought that, you’d be wrong, as just a brief glance of the list of legislation still in play indicates. And most of that list — bills that have crossed over to the other side, or have a good chance of doing so next year — deal with the big three costs of business: energy, labor and taxes.

Indeed, the failure of the House might be a blessing in disguise. The more moderate Senate will have more up-to-date revenue numbers to work with, and with the economy on the upswing, that will probably mean less of a shortfall. And that could mean more leeway for tax relief, as well as some crucial workforce development and infrastructure programs.

Then again, we could find ourselves in the same situation in June, when the House votes on the Senate budget, facing another mess we just stepped away from.

The year started out with so much political promise for business. Republicans had control of all branches of government, both locally and nationally. Business taxes were already on the way down and are scheduled to go down further. Regulations were going to fade away. Northern Pass was going to finally stand tall and supply New England with cheap energy. And the heavy burden of Obamacare was on its way out.

It turns out the same dynamics that drove the health care fiasco in Washington came home to roost in Concord, where the pragmatic middle gave way to those on the edge pulled by a purer principle — in this case a budget indexed to inflation.

The old-guard leadership of the House tried to mollify the local, very conservative “Freedom Caucus” by spurning their own new governor’s proposal to fund targeted full-day kindergarten in his $12.1 billion budget. But even the $11.9 billion budget, without kindergarten, couldn’t satisfy the hardliners and only alienated the Democrats. The result was an embarrassing defeat of the budget, 220-134.

Along with the budget went a lot of other things that were important to business, but not entirely, since it is the Senate that will now be using the governor’s budget as its fiscal template. 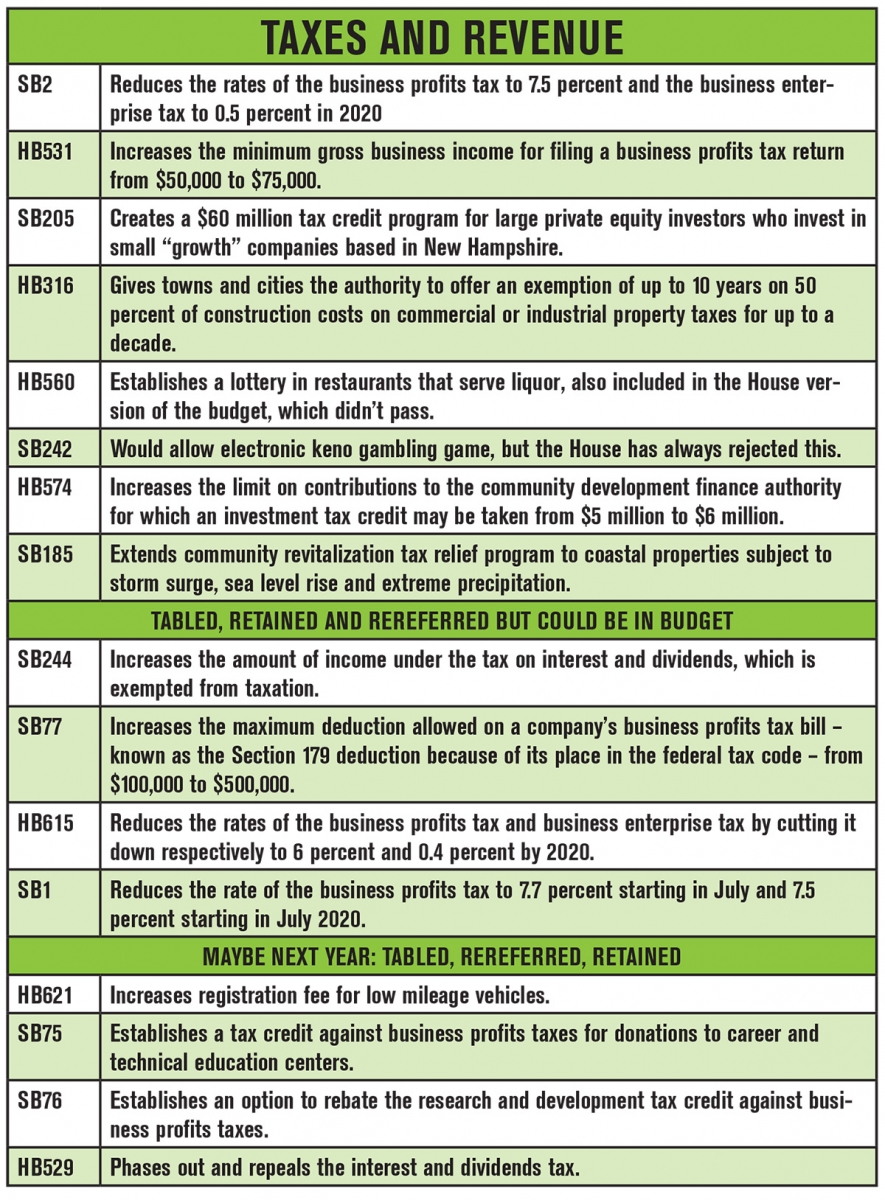 That means when both sides negotiate in June, the following will not be in the budget — items that would have been included in the House budget if it passed:

• Keno: The House version would have allowed keno machines in restaurants and taverns with a liquor license. The NH Lodging and Restaurant Association, which has opposed casino gambling for both moral and economic reasons, has been split on keno. The Senate has favored casino gambling but not keno.

• Online lottery: This would have allowed smartphone scratch tickets. With a projected drop in foot traffic into convenience stores and other retail outlets, the NH Grocers Association vigorously opposed the proposal.

• Infrastructure: A total of $40 million, including $10 million for school building aid and $30 million for roads and bridges, would have been a nice boost for the construction industry.

• Medicaid: The failed House budget proposal would have given $14 million less toward a Medicaid shortfall appropriation than the governor’s proposal — a major issue for the NH Hospital Association, which is suing the state over underpayment, as well as to the BIA, which fears cost shifting for private insurers.

• Workforce training: The House plan would have instituted Granite Workforce, which would appropriate $11.5 million in federal funds to train welfare recipients, help them overcome barriers of employment and pay companies in certain fields, like health, advanced manufacturing and construction, to hire them. The Senate, however, also voted to support the program, tacking it on to a food stamp bill, so it might still be funded, but at $9 million.

Aside from kindergarten, the governor’s budget also included funding a college scholarship program and a high school/college dual/concurrent enrollment program, backed by business groups as a way to help alleviate the workforce shortage. 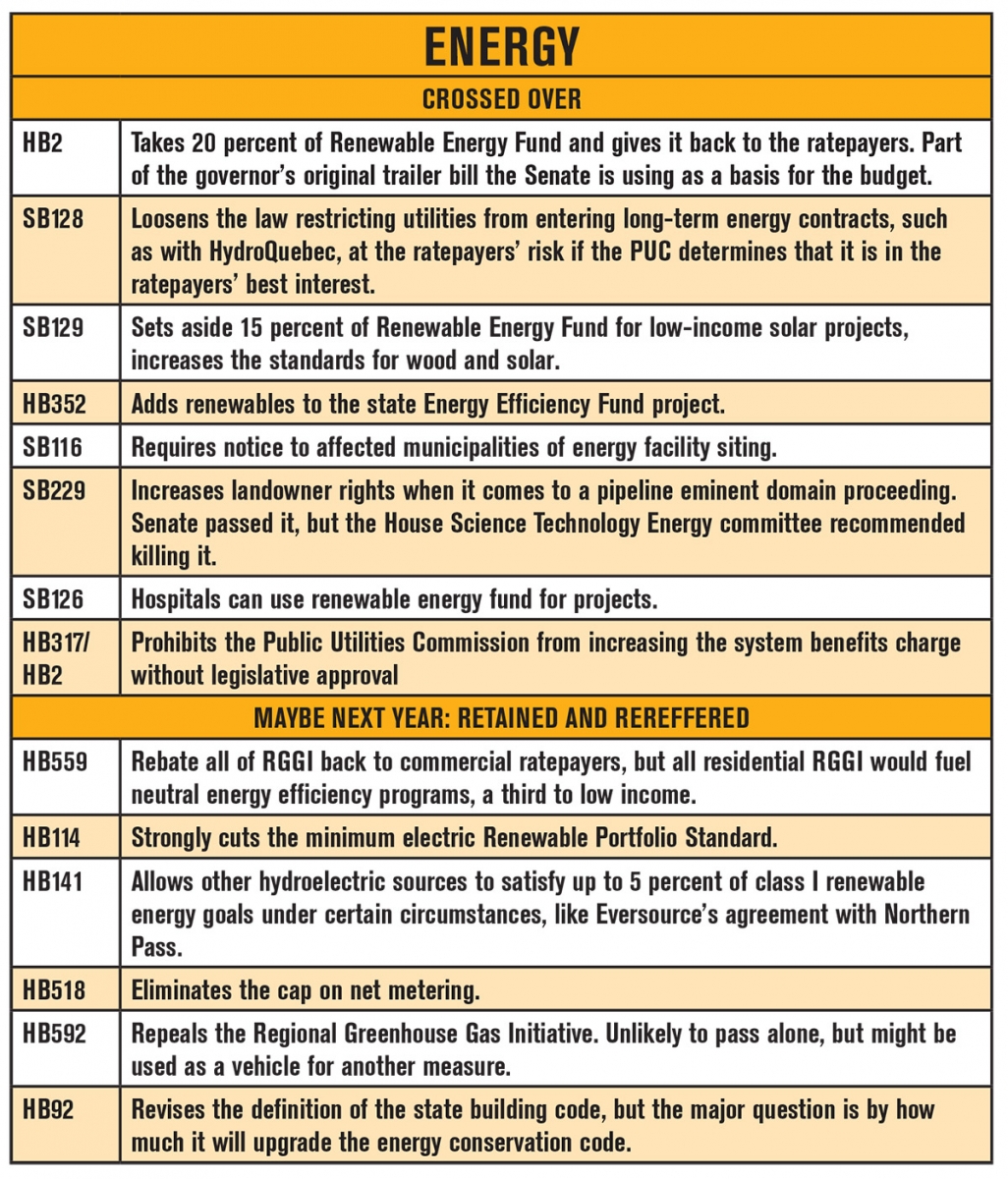 Finally, there are things that were in both the governor’s and the House budget proposals that might find their way into the Senate version:

• Rebate a fifth of the state’s Renewable Energy Fund to ratepayers. The Senate may not go along with this idea, however, since it passed a bill that would target 15 percent of the fund for solar projects that benefit low-income people.

Perhaps the biggest difference between the House and governor’s proposals are the revenue estimates — a $60 million difference. The Senate will come up with its own revenue estimate as well. It has the advantage of revenue reports following the returns that come in on April 17, but it also is starting from a bigger number to begin with.

This might leave some room for maneuver when it comes to tax relief. The business profits tax, whose rate just came down from 8.5 to 8.2 percent, is scheduled to go down to 7.9 percent in January. (Similarly, the business enterprise tax, which went down from 0.75 to 0.72 percent will go to 0.675 percent).

Senate Bill 2, which is in the House, cuts taxes further, though those wouldn’t take effect until 2020 and would not affect the current budget.

However other bills, including another reduction in the BPT, but not the BET, might be incorporated into the budget, along with Senate positions on larger deductions in both the interest and dividends tax and for Section 179 capital equipment deductions. 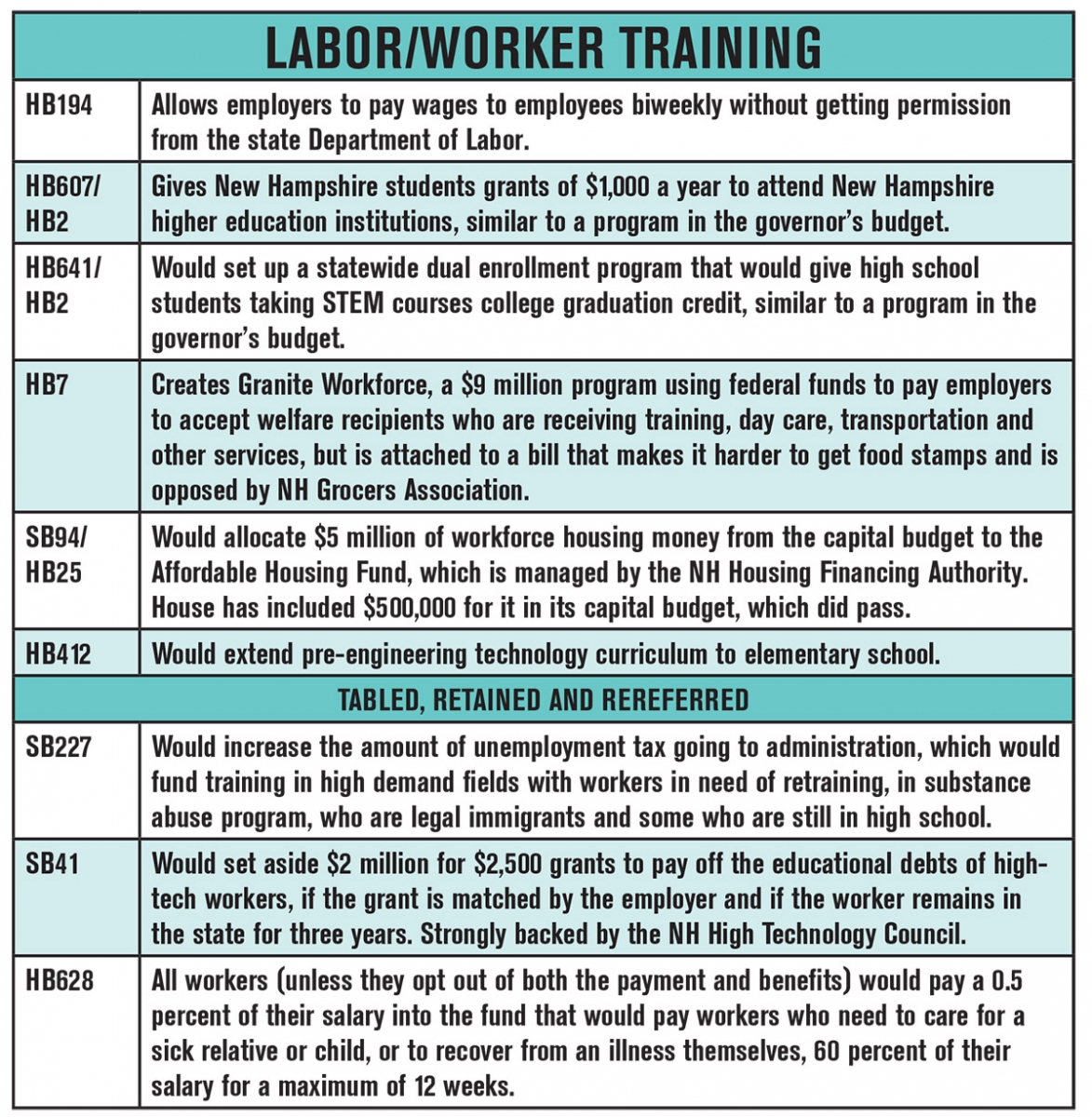 And the Business and Industry Association hasn’t given up hope of lifting the cap (now at $7 million) on the research and development tax credit. There are a few other tax credit incentives out there as well, including SB 205 (establishing a Small Business Jobs Fund and tax credit) and House Bill 316 (a property tax exemption for commercial and industrial construction), neither of which would directly impact the budget.

When it comes to labor, both left and right had favorite issues this session — right to work and minimum wage — that had mostly symbolic impact to most businesses and workers, and they were both discarded.

The House retained a proposed family medical leave insurance program, but the big issue in this era of labor shortages was anything that might attract or train workers.

A proposed initiative that would use welfare funds, Granite Workforce, has a good shot at passage, but it really won’t do much to help highly specialized industries. The NH High Tech Council was putting their hope in luring high-tech workers from other states with a program that would help pay off their college debt (SB 41), but that would take $2 million in general funds. And keep an eye on SB 227 — that would divert $6 million from the unemployment trust fund to support training programs, including those in high schools. The measure was earlier tabled, for fear it might cause the trust fund to dip below a threshold that would trigger an unemployment tax increase. But if the fund is healthy, that too might pass.

Finally, there is a sleeper: The Senate has already passed a bill that would appropriate $5 million to replenish the Affordable Housing Fund, helping developers fill the loan gap, a priority of both employers and builders. The House did appropriate $500,000 in its capital budget proposal, so there’s a good chance that something will be funded.

But when it comes to energy, don’t expect much from this Legislature, except for a few tweaks to the Renewable Energy Fund (SB 129) and perhaps a boost in Eversource’s attempt for an end run around the Public Utilities Commission’s rejection of its long-term contract with Hydro-Quebec (SB 128).

As for any significant health care legislation — including allowing out-of-state insurers to sell policies without adhering to state mandates — it’s on hold pending changes in Washington.

One other significant piece of legislation is on hold. SB 247 would require lead testing for all kids before they turn 2, if they are to attend preschool. If the testing is positive and they live in apartments, those apartments have to be tested and perhaps remediated. The bill comes with an estimated $3 million subsidy to win landlords over. So this bill too depends on the budget.

A lot, it seems, depends on the budget. And a lot depends on both sides working together.