The Factory on Willow begins leasing apartments in Manchester 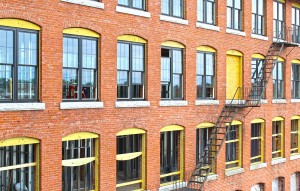 The Factory on Willow, a 61-unit studio apartment complex at the site of the former Cohas Shoe factory in Manchester, has begun leasing, with occupancy beginning March 1.

The Factory on Willow features pet-friendly live/work studio apartments “specifically designed with creators, innovators and entrepreneurs in mind.” It also has 10,000 square feet of flexible commercial space available for rent. Among the ideas for the space include a food truck patio and dining hall, tiny retail shops, a cafe and a micro distillery.

As for the residential units, amenities include thermostats and locks that can be controlled on a secure app-managed system, high-speed internet included with the unit, a smart laundry room, a fitness center, a furnished outdoor patio with grills, a gardening area and a fenced-in dog park.

“When you become a resident of the Factory, you’ll be a central piece of a community that will grow as new concepts are tested and additional amenities and businesses are added in the commercial mixed-use space located in and around the building. You’ll find plenty of inspiration for your career, hobbies, and lifestyle inside your unit and around The Factory,” said Liz Hitchcock, developer and owner of the complex.

Handling restoration of the former mill building was Eckman Construction of Bedford. The firm’s Preston Hunter said the project “was a true team effort. The beautiful character of this historic structure shines through in every space.” Fuss & O’Neil handled engineering and site design.

The work was done at a site that, according to Russ Lagueux of the New Hampshire Department of Environmental Services, was one of the state’s Hampshire’s oldest, actively managed contaminated sites.

“For nearly 50 years, soil and groundwater at the property has been negatively impacted from heating oil that leaked during the 1970s from a large underground storage tank,” he said. “The redevelopment of the site into a creative collaboration of living and commercial space provided a once-only opportunity to physically get to the previously inaccessible contamination, and remove it in conjunction with the site construction work.