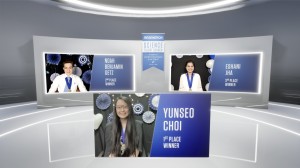 Yunseo Choi, 18, a student at Phillips Exeter Academy, recently took first place and the $250,000 top award in the Regeneron Science Talent Search, a science and math competition for high school seniors presented by Regeneron Pharmaceuticals and The Society for Science. Choi won for her project in which she played a theoretical “matchmaker” for an infinite number of things or people. She studied matching algorithms that work for a finite number of couples and determined which important properties would still work for an infinite number. Matching theory has numerous real-life applications, including matching organ donors to recipients, assigning medical school applicants to rotations and pairing potential couples in dating apps. A total of 40 finalists were honored, including second-place finisher Noah Benjamin Getz and third-place finisher Eshani Jha.

Eight more New Hampshire communities have voted to partner with Consolidated Communications to build out fiber-to-the-premises broadband internet networks. Voters in Marlborough approved the partnership on March 16, joining Charlestown, Fitzwilliam, Gilsum, Goshen, Langdon, Troy and Unity, which also recently voting their approvals. When complete, the new networks will connect a total of more than 9,400 homes and businesses to faster broadband connectivity, including symmetrical speed up to 1 Gig.

Citizens Bank has entered a partnership with the Girls Who Code program, which helps 10th-, 11th- and 12th-grade girls learn computer science skills. Under the partnership, the bank will sponsor the organization’s Summer Immersion Program, a free two-week virtual program through which participants learn to code in a supportive environment and gain leadership skills. The free program is expected to serve as many as 6,000 students around the world.

Newburyport Bank has launched the use of the Zelle money transfer app to its digital banking services. Zelle enables digital payments from and to financial institutions of all sizes, using a recipient’s email address or U.S. mobile number.