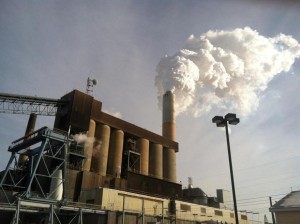 During the Obama administration, the agency’s Clean Power Plan attempted to include shifting to cleaner sources of energy as part of the “best system of emissions reduction” for existing coal and natural gas plants. But the Supreme Court’s decision takes that option off the table for the EPA, preventing the agency from forcing power generators to move toward cleaner energy sources by setting carbon emissions limits.

The court said that particular way of reducing emissions was not within the authority of the EPA.

“It makes it very unlikely, at least using the Clean Air Act, that EPA can directly address the emissions from Bow,” said Brad Campbell, president of the Conservation Law Foundation. “Or any other coal plant.”

The decision comes after warnings from the Intergovernmental Panel on Climate Change of mounting disastrous consequences, unless the world transitions away from fossil fuels.

In New England, Campbell said the Supreme Court’s decision turns the spotlight in the fight over climate change onto state laws.

“This really takes the U.S. government out of the game in terms of really keeping us on track to reduce emissions on a scale that would give us any hope of keeping climate change to a tolerable level,” he said. “So it really increases the importance and the urgency of states taking action.”

Five out of the six New England states have laws that mandate greenhouse gas reductions across the whole economy, from power plants to individual buildings. New Hampshire lawmakers failed to advance legislation that would have put a greenhouse gas emissions reduction goal into statute this year.

“Implementation of those laws has been slow, and this decision means that has to change,” Campbell said.

A recent state-funded report shows New Hampshire’s climate has undergone significant changes already. But, researchers said, how much hotter and wetter the state becomes depends on how much the world reduces greenhouse gas emissions.

For Rebecca Beaulieu, communications director for the climate justice advocacy group 350 New Hampshire, the decision came as a disappointment. But, she said, grassroots action on climate change will continue.

“Locally, our battles have largely been with ISO New England, our regional energy grid regulators, and not so much with the EPA directly,” Beaulieu said. “So I believe we’re intending to continue our fight as we have been.”