UNH Center for Venture Research reports 4.1 percent increase in first half of 2014

With year-end approaching, the University of New Hampshire’s Center for Venture Research has released stats on the U.S. angel investor market that reveal a generally positive reflection of the first half of 2014.

Total investments in the first and second quarter of 2014 hit $10.1 billion, up 4.1 percent from the first half of 2013. According to the report, the past five years have shown sustained market growth, recovering from “the correction” in 2008.

It’s a sign of the economy bouncing back, says Jeffrey Sohl, director of the center. 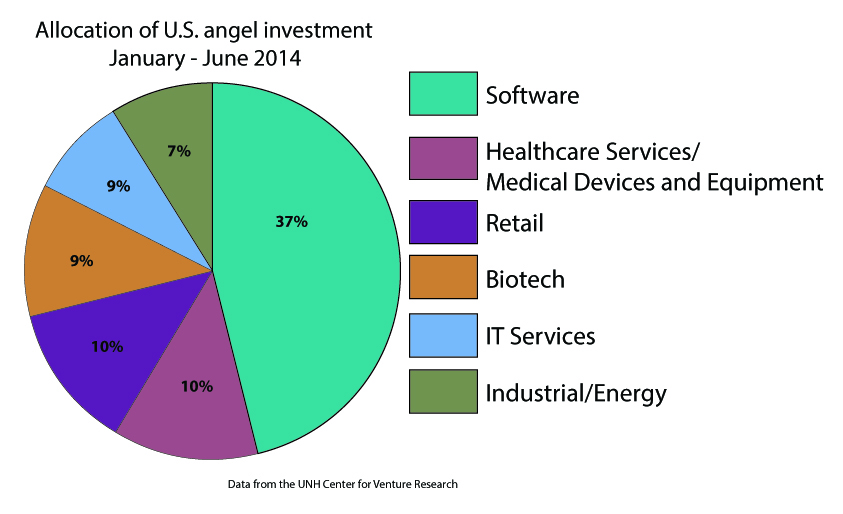 “I’ll be watching that number closely at the end of the year. It’s not a good sign. Angel investors are investing in a later stage,” says Sohl, nodding to an 11 percent increase in expansion stage financing in 2014. But seed and startup investments are the “feeder for the ecosystem,” with the potential to grow into large employers.

The Center for Venture Research also saw a shift in early-stage (post-seed and -startup financing), taking 42 percent of the share of angel investments, down from 51 percent in the first half of 2013. Forty percent of angel investments are first time, to companies that have never received outside funding, another figure down slightly from the first period of 2013.

Industrial/energy investing has been a consistent performer since 2009, showing a continued interest in clean tech, says the report.

“We have a sense New Hampshire is right in there, follow[ing] the national averages. It has a pretty robust angel community,” says Sohl.

He points to a 2013 Kauffman Foundation study on number of high-tech startups per capita in small- and medium-sized cities. The study reports, in 2010, Manchester-Nashua ranked fourth in the nation and Rockingham-Strafford counties, seventh.

“Based on certainly the first half of numbers of ‘14, probably the end of ‘14 will be pretty similar to those numbers. We don’t see a lot of change,” says Sohl. “First of all, the stock market is going well. Corporations are still sitting on a bunch of cash, and that’s a big exit for a lot of these companies. The investor population that bet on these companies, that aren’t going to exit for 5-7 years, they’re feeling pretty positive.”

While return rates for investors have been “incredibly volatile,” says Sohl, there’s nothing to be alarmed about. Annual returns average between 20 and 30 percent.

Sohl also is encouraged by the number of young people entering entrepreneurship, increasing the demand for business courses at colleges and universities.

“They’re a crazy lot; they like their independence. They’re pretty dedicated. Obviously, I see them in classrooms a lot,” Sohl explains. “They’re not terribly concerned about the risk. They don’t have the mortgages; they don’t want the mortgages. They’re fine renting. They’re fine mobile. They have wanderlust.”