An overview of changes aimed at streamlining regulations

New Hampshire has a new set of laws regulating banks and credit unions.

The laws were developed by a working group, headed by the deputy bank commissioner, that met for nearly a year and a half to review and revise existing laws. Representatives from banks, credit unions, trust companies, insurance companies and securities firms participated in the group. Their recommendations became Senate Bill 188, which passed the House and the Senate as Chapter 272 and was signed into law by the governor on July 27. The effective date for most of the chapter is Oct. 1, however certain sections that involve the Banking Department’s budget went into effect in July 1.

None of the laws involved affect consumers; rather, they are focused on the organization, management and operation of banks and credit unions and transactions, such as business combinations and out-of-state activities.

The existing laws had become outdated and cumbersome and interfered with the ability of banks and credit unions to serve their customers’ needs. Nearly 25 separate chapters, some of which were over 100 years old, were reduced to five separate chapters. These chapters are distinguished from each other by the type of bank or credit union they regulate:

• RSA Chapter 383-A establishes a set of requirements that apply to all banks and credit unions.

• RSA Chapter 383-B governs depository banks, both mutual and stock, and the holding companies that own them.

• RSA Chapter 383-C governs trust companies, which are classified as banks, but are not authorized to accept deposits.

• RSA Chapter 383-D governs a subset of trust companies known as family trust companies. These are private companies that serve the needs of the members of one family. The family members are defined by their relationship to a designated person.

• RSA Chapter 383-E governs credit unions, which are owned and operated by their members. They are different from banks, sharing some powers, but limited in others.

Also amended were the bank commissioner’s statute RSA Chapter 383 and a variety of other statutes whose terms had to change as a result of the new laws. 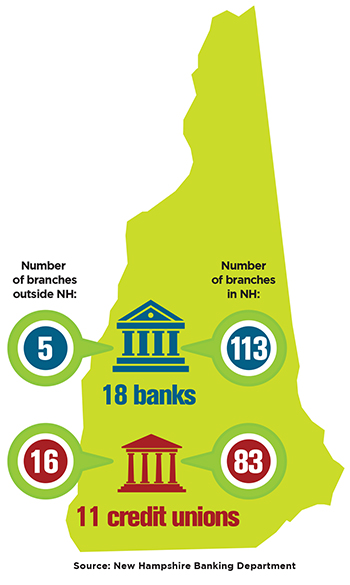 Of note, the laws improve internal management of banks and credit unions. They will find, for example, that they can use telecommunications to conduct meetings and not have to abide by physical attendance requirements that used to be in effect.

While no new powers are granted to banks and credit unions under the laws, the authority for their existing powers is clearly identified to remove any uncertainty and allow them to more effectively plan their business strategies. The laws remove constraints on banks and credit unions from establishing branches in any state and allow any out-of-state bank or credit union to establish a branch in New Hampshire – this encourages competition and benefits consumers.

The laws also improve the regulatory climate for trust companies and family trust companies as a companion to the extensive modernization of New Hampshire’s trust code in recent years and creates a positive environment for their growth.

Banks and credit unions have been overwhelmed by extensive federal regulation in recent years as an aftermath to the financial collapse that began in 2008. New Hampshire has moved in a different direction – to simplify its laws and ease the burden on its financial institutions so that they can focus on what’s important: serving the customer.