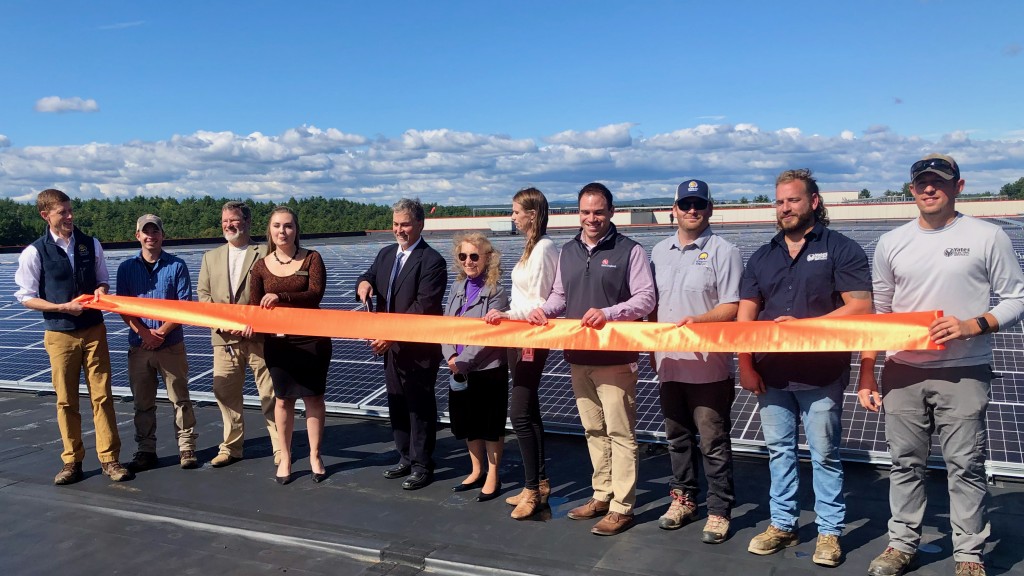 Mike Violette, Associated Grocers of New England’s CEO, cuts the ribbon to mark the startup of the largest rooftop solar array in New Hampshire, which sits atop the grocery distribution company’s 500,000-square-foot facility in Pembroke.

Associated Grocers of New England has flipped the switch on what is now New Hampshire’s largest rooftop solar array at its Pembroke headquarters.

The 1.3-megawatt array – which increases the state’s total solar capacity by 1 percent – was designed and installed by Brentwood-based ReVision Energy. The 3,400 solar panels that sit atop the company’s 500,000-square-foot facility are expected to generate more than 1.45 million kilowatt-hours of clean energy annually, offsetting 2.2 million pounds of CO2 emissions, ReVision said.

AGNE received almost $600,000 in investment tax credits to help offset the $2.3 million cost of the array and reduce the payback period to under nine years.

At the array’s Sept. 29 unveiling, AGNE CEO Mike Violette said the idea to install the array began to germinate about a year ago, when a former board member, Tom Bradbury, “inspired us to establish a committee of bright associates to focus their passion for sustainability on making green awareness initiatives a priority. I don’t think any of us anticipated that the group’s first venture would be one of this magnitude, but we couldn’t be prouder of all that they’ve accomplished thus far.”

Dan Weeks, vice president of business development at ReVision, pointed to the impact that decision may have for the entire state going forward.

“Although New Hampshire lags behind the region in solar deployment, AGNE is setting a powerful example for businesses and the state of how homegrown clean energy can cut costs, add jobs and help the environment,” said Weeks.