New Hampshire ranks No. 14 out of 18 states in building codes 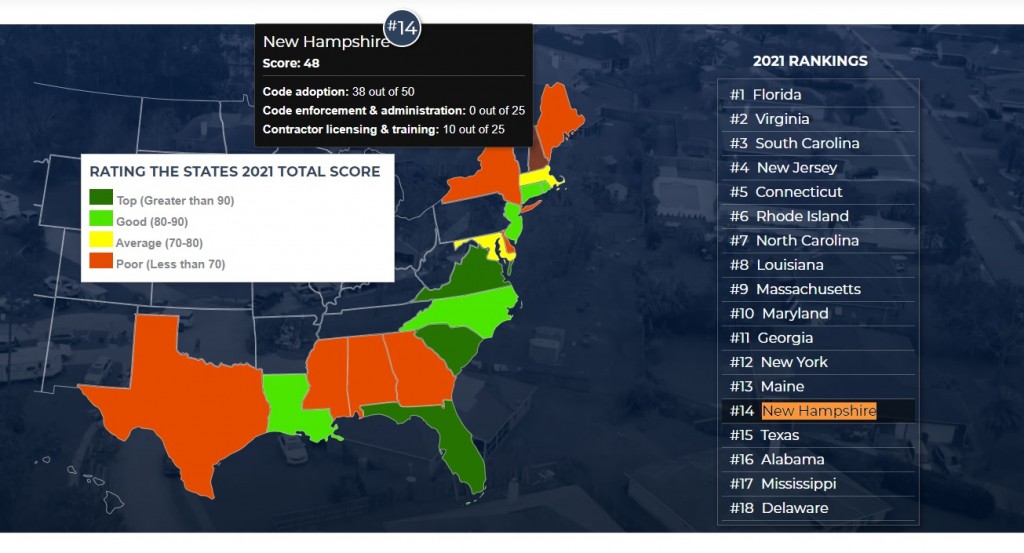 Click on map to enlarge. Interactive map available at https://ibhs.org/public-policy/rating-the-states/

New Hampshire lags other coastal states, ranking 14 out of 18, in a new report on building codes from the Insurance Institute for Business & Home Safety.

New Hampshire was accompanied by Maine in a list of eight states categorized as “poor,” receiving less than 70 points in the 2021 Ratings Report released Tuesday, the first day of the hurricane season in the Atlantic.  Those other states include Georgia, New York, Texas, Alabama, Mississippi, and Delaware, lack a mandatory statewide building code.

While New Hampshire adopted 38 of 50 building codes, its contractors were licensed and trained for 10 out of 25 codes, and the state received a zero out of 25 for code enforcement and administration. Meanwhile, Connecticut and Rhode Island were close to near perfect scores, while Massachusetts lagged some in code enforcement and administration, though still achieved 15 out of 25 — well above New Hampshire.

According the report’s records dating back to 2012, New Hampshire’s scoring has remained stagnant for nearly a decade. Making recommendations, the report primarily takes issue with the state’s localized approach to trades certification and code enforcement.

While contractor licensing is required for plumbing and electrical contractors, the report notes with other trades, New Hampshire does not require exams prior to licensing, subject contractors to disciplinary action or require continuing education courses. It states New Hampshire does not have a statewide program to license building professionals, and recommends the establishment of a building official certification and licensing program throughout the state.

In regard to code enforcement, the report knocks down New Hampshire’s localized approach to code enforcement, noting the updated state residential building code adopted in Sept. 2019 is “at the discretion of local jurisdictions” and “not mandatory throughout the state.”

“A strong building code is critical to reducing the damage and destruction caused by hurricanes and even nor’easters each year,” said Dr. Anne Cope, chief engineer at IBHS, whose research center is located in Richburg, S.C.