From concept to construction, SMP Architecture fused NFR’s operational requirements with design and implementation in creating their new corporate headquarters. 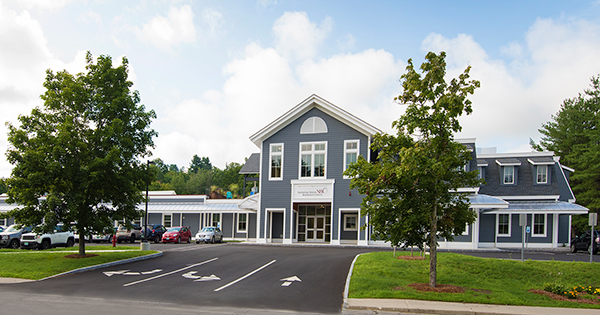 When the phone rang at SMP Architecture in Concord in February 2016, company President Jason LaCombe initially thought the query was a sales call.

Instead, it became clear within minutes that it was actually an opportunity to help a New Hampshire-based company strengthen ties to its hometown and create an innovative space for the firm’s anticipated growth — but it would have to happen quickly.

The team learned that National Field Representatives — a Claremont company that inspects, secures and prepares foreclosed properties across the country for banks — was growing, and needed to consolidate three of its nearby locations into one.

“Our immediate task of programming and site analysis started before our first design meeting with the client’s team,” LaCombe says. “The result was showing up at our first meeting with five different approaches to how we could expand their existing building to meet their space needs. The client’s keen assessment and decision-making became clear in that meeting and we knew this was going to be a great project.”

While there were several offices and options open to him, a priority for National Field Representatives President and Founder Steve A. Cossingham was that the business remain in town.

“They could’ve put the company anywhere in the country,” Senior Architect Eric Palson says. “But they wanted to put it in Claremont. He was very committed to Claremont.”

The initial meeting between SMP Architecture and National Field Representatives that April came after Palson conducted a site analysis, and included SMP’s multiple approaches to meeting the client’s space needs. From there, it evolved into more of a brainstorming session.

“It was very informal and a lot longer than we thought it would be,” LaCombe says. “We were there a couple of hours, but we didn’t have a specific agenda and we didn’t do a big presentation. We talked about who we were, what we understood the challenges of the project to be and we had an extensive conversation about the process. They were interested in what we saw as our role, how we’d manage it and how we could get them into the building in their time frame.”

That timeline was the first challenge addressed by LaCombe and his team. The interview occurred in April and the first design was unveiled on May 10, 2016. The new, expanded building would have to be ready for occupancy 14 months from that day. Foundations were in and contractors, led by Milestone Engineering and Construction, were setting steel by December of that year.

“That was a particularly fast turnaround in our experience,” LaCombe says.

Because construction would take place through the winter, Milestone and the team came up with a solution that saw workers install prefabricated insulated wood panels to the exterior of the structural steel building, which would create an insulated shell and allow work to move forward despite the cold weather.

“They chose to invest in Claremont, which is something the founder took seriously,” LaCombe says. “When it came down to working with subcontractors, a lot of the work went to local companies. That was mainly because he [Cossingham, who passed away in April of 2017] felt it followed through on their commitment to the city.”

The project was completed in two phases: Initially, a two-story, 22,000-square-foot building was constructed while employees continued to occupy the original, one-story building. The employees were then moved into the new building while the original building was renovated. In the end, the company’s entire workforce of nearly 300 people were moved to the newly expanded location that originally housed 100 workers.

“Deciding when and where to move people during construction was almost more challenging than figuring out the building design,” LaCombe says. “We tried to keep them as functional as possible without holding up construction.”

The design expanded the building along the road with a two-story addition that minimized the building footprint and created a strong presence on the street. A gabled front leads visitors to the new entry and lobby. A mansard roof with dormers was incorporated on the balance of the addition to highlight the entry gable, maintain the scale of the other buildings on the street and add character to the building.  An expansive roof deck and covered walk around the entire building were added amenities for the employees and became features used to unify the new and old buildings.

The interior is an open-concept, exposed structure workstation area with exposed duct work.

“The lay person may get the impression that it’s less expensive to leave the suspended ceiling off,” Palson says. “But in fact, it requires a lot more care with what it looks like because you can see it all.”

The new building incorporated unique design elements like an expansive roof deck — the only outdoor space where employees could gather — and a covered walkway around the perimeter of the structure.

“We didn’t realize how important those elements were until we were further along in the project,” Palson says. “We met with all the senior staff, and it really became clear they had a culture that was all about building a good company and treating their customers well.”

LaCombe says key partners such as Milestone Engineering and Construction, Irish Electric Corp. of Hopkinton, Hampshire Fire Protection of Londonderry, Al Terry Plumbing and Heating of Hooksett and JSN Associates of Portsmouth played an important role in the project hitting all of its deadlines — as did the involvement of National Field Representatives.

“It was really important for them to not only be in Claremont, but to be good neighbors,” LaCombe says, citing a detail that necessitated emptying site debris early in the morning. “They met with the neighbors and learned that trash removal was a noise concern, so they moved the dumpster across the site to make everything easier. They had no issue doing things like that.

“Sometimes it’s the simple things that make projects more successful. Ultimately it was the integrated team approach that allowed us to design and construct this signature project for NFR and the city of Claremont.”