Market timing seems so easy, in theory. Buy when prices are low and sell when they are at a high. Anyone who diligently follows the market and stays abreast of economic news can anticipate, and capitalize of these movements, right?

Wrong, at least not over the long term. As history has shown repeatedly, market timing is a losing game. Volumes of research critical of the practice have been written, and some of the greatest investment minds – William Sharpe, a Nobel laureate, Benjamin Graham, considered the father of value investing, and John Bogle, founder of The Vanguard Group – have all counseled against it.

Even so-called market timing experts can’t consistently predict when to move in and out of the market. A study by CXO Advisory Group tracked more than 4,500 forecasts by 28 self-described market timers, between 2000 and 2012. Only 10 were able to accurately forecast equity returns (as measured by the S&P 500) over 50 percent of the time, and none was able to predict accurately enough to outperform the market.

Certainly, some investors have made accurate market calls, and others have predicted a market bottom or top. But over the long run, the law of averages usually wins out, effectively rendering a market timing strategy a game of chance. 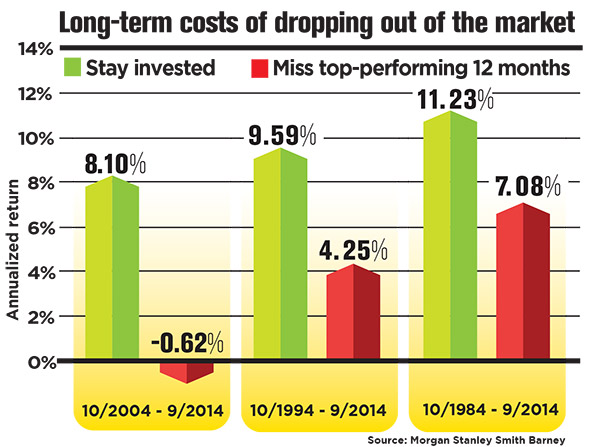 As difficult as market timing is for professional investors, they are typically guided by a buy and sell discipline. Nonprofessional, individual investors tend to sell in a panic at or near a bottom, and buy in a flush of confidence at or close to a market top.

Perhaps the most significant deterrent to market timing is the cost of being out of the market. For example, the accompanying chart shows the effect of missing the 12 top-performing months for stocks (as measured by the S&P 500) during the 10-, 20- and 30-year periods ended Sept. 30, 2014. Investors who remained invested for the entire period would have achieved higher returns for each holding period than those who tried to time the market and missed.

So if you are considering a market timing strategy, think again. There are other choices, such as tactical asset allocation, that may allow you to take advantage of market opportunities, yet remain fully, or substantially invested.