Before it began, David Juvet, vice president of the Business and Industry Association of NH, didn’t think much was going to be accomplished in the 2016 legislative session.

“I was expecting little more than lawmakers sponsoring bills that had no hope of passing in order to make a political point, because it was election year, and we live in hyper-partisan times,” he said.

Yet in the end, a Democratic governor signed into law some 330 bills passed by a Republican House and Senate in the 2016 legislative session. Half of them (152) directly affected business, nearly all with support, or the tacit approval, of business advocates. There were three key tax breaks, a bill allowing highway signs to attract tourists going to the North Country, a few looser labor laws, bills that helped the budding solar industry and boosted the sharing economy.

And nearly all of the bills opposed by business groups, ranging from a minimum wage hike to tinkering with the reasonable compensation deduction, were either defeated or kicked down the road via a study committee.

One reason both parties managed to agree on so much was that this time, at least for several pieces of legislation, it was a matter of life and death.

“The opioid crisis set the tone, and it just mushroomed,” said Paula Minnehan, vice president of the NH Hospital Association. “Still, it was a long session. It kind of felt like it was endless.”

Who would have thought that Medicaid expansion – anathema to Republicans strongly opposed to Obamacare — would have passed in April?

There was pressure for compromise not only because of the political fallout of leaving some 40,000 newly insured people to fend for themselves, or the lobbying efforts by both the hospital and insurance industries, both willing to put up the local match to insure the increased flow of federal Medicaid dollars. It also wasn’t just because of the support of organizations like the BIA, which worried about cost-shifting to employer group plans. 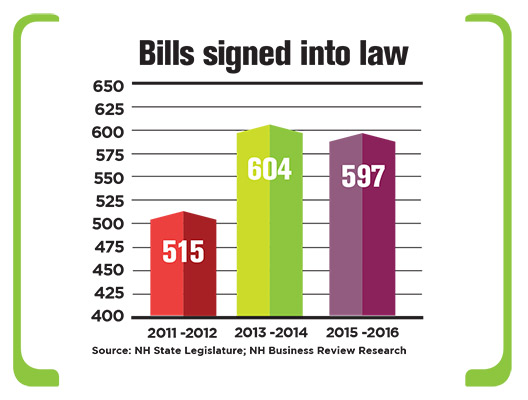 Medicaid expansion also gained traction because of the opioid crisis. How would there be enough access to people who needed it without Medicaid expansion? For those pushing for greater treatment, House Bill 1696 was on the top of their list.

Then there was the bill that dealt with the sunsetting of the Certificate of Need Board at the end of June. SB 481 requires continued licensing for cardiac catheterization laboratory services, coronary artery bypass graft surgery and megavoltage radiation therapy. It also requires that all inpatient facilities maintain emergency rooms and treat all comers. In addition, any facility opening within 15 miles of one of the state’s 13 critical care access hospitals must seek state permission as well.

Some opposed the measure, saying it did not allow the free market to fully reign, but the medical profession saw it as a way to protect the local health care market from huge out of state interests.

For businesses outside the health care industry, SB 342 will probably have the most far-reaching consequences.

It increases the maximum capital equipment deduction on the business profits tax from $25,000 to $100,000. The cap still falls short of the federal deduction – known as the Section 179 deduction – which was recently raised to $500,000.

Some lawmakers advocated matching the federal limit, but the governor balked at that because of the estimated loss of $15.2 million in revenue. The bill she did sign is expected to cost the state $7.6 million in 2017, when it goes into effect.

The bill also updates the state’s tax code to sync with the most current federal code for the first time since 2000 (which gave the state the dubious distinction of having the most outdated tax code in the nation) and calls on lawmakers to update each year going forward.

Another bill, SB 342, alleviates the tax burden on businesses that go public. Gov. Maggie Hassan last year vetoed a bill similar to SB 342, then dubbed the “Planet Fitness bill” because it was initially proposed when the Stratham-based gym franchisor went public.

That bill would have prevented the state from taxing, under the business profits tax, the step-up in basis for firms that go public, but it was soon broadened to pertain to any firms that sell shares to outside investors.

Hassan vetoed the 2015 bill because she said it wasn’t fully vetted. Critics worried that it would enable firms to avoid paying a capital gains tax.

But this go-round, the governor signed the bill, saying it would eliminate a “phantom tax” on startups. The step-up would be counted as a capital gain, giving businesses the option to take the gain on either end, depending on which situation saves the firm the most money. The governor’s office opposed that option, but was willing to accept it if the Legislature agreed to limit the Section 179 deduction to $100,000. 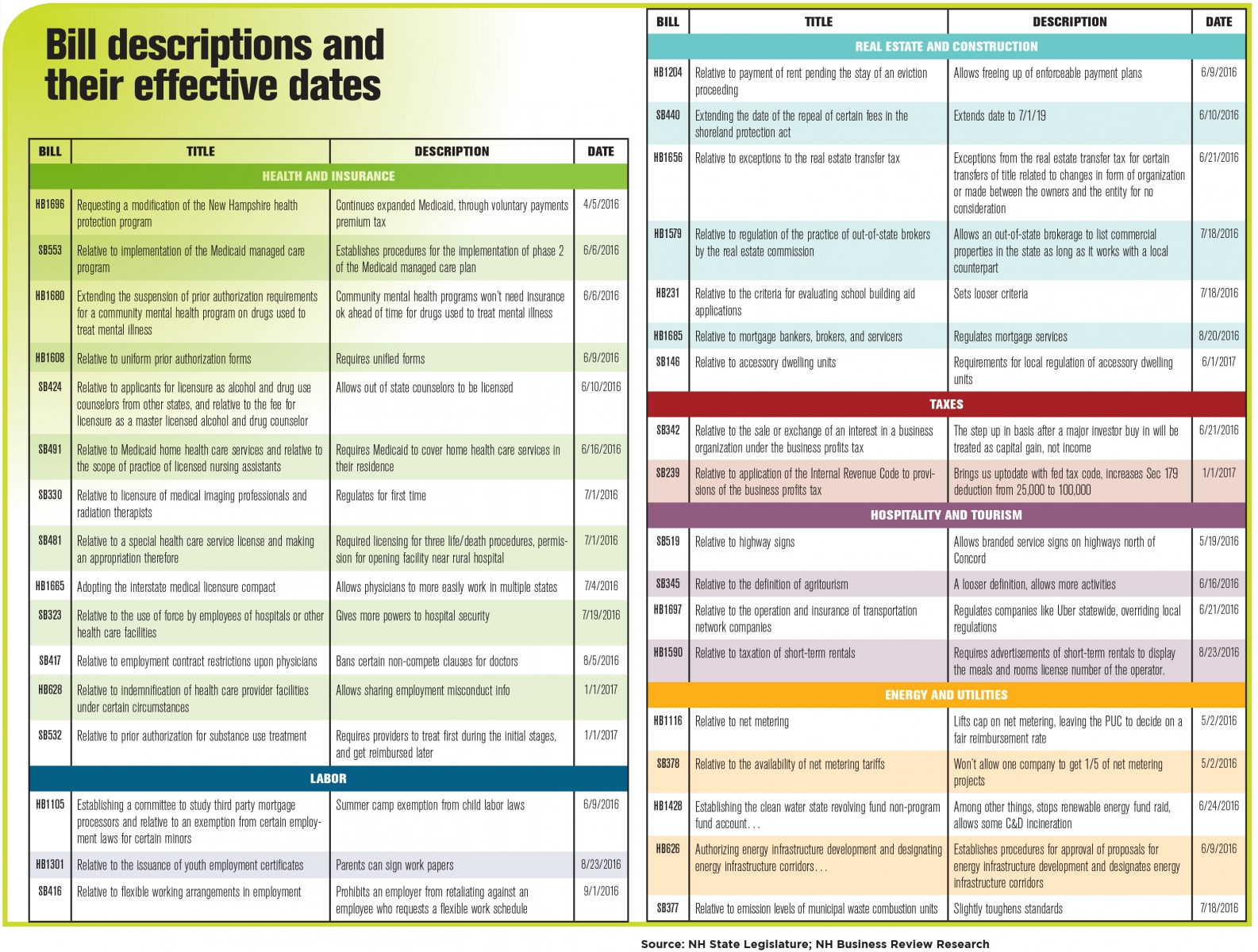 The real estate industry also walked away with a tax-related win. HB 1656 allows businesses to avoid paying tax on real estate transfers between different entities, such as LLCs, with the same ownership. Although this had mainly been done in the past, recent interpretations of the law made some businesses jittery.

“It’s like taking out of your left pocket and putting it in your right packet,” said Bob Quinn, a lobbyist for the NH Association of Realtors. “That shouldn’t be taxed.”

Another bill, HB 1656, supported by the NH Home Builders Association and the Realtors, requires municipalities to allow for accessory dwellings, known to many as a “mother-in-law” addition, in residential neighborhoods. It is seen as a way to alleviate the demand for affordable housing.

“They can still regulate it,” said Kendall Buck, shortly before he stepped down in June as the Home Builders Association’s executive vice president. “They just can’t say, ‘We don’t want that here.’”

Quinn was also happy with two bills aimed at regulating short-term rentals, which realtors often handle for clients. HB 1590 originally would have labeled them businesses and forced companies like Airbnb to collect rooms and meals taxes.

Realtors suggested that renters simply put a rooms and meals tax ID on their advertisements. A related bill, sponsored by Sen. Martha Fuller Clark, enabling localities to regulate short-term rentals was sent to a study committee.

Henry Veilleux, a lobbyist for the NH Lodging & Restaurant Association, also praised the short-rental outcome, though his organization was on the other side of the issue.

“It’s not the be-all or end-all,” he said, but it did give “the Department of Revenue Administration a tool for compliance,” helping the agency put short-term rentals on a level playing field with regular bed and breakfasts and other lodging businesses.

NHLRA also backed the bill regulating transportation network companies Uber and overriding municipal ordinances, as did the Greater Manchester Chamber of Commerce and Uber itself. Indeed Uber offered a discount a week after the bill’s signing to celebrate its passage.

HB 1697 gives the company mostly what it says it needs to operate successfully: a flexible liability insurance policy that is only active when the driver is available or driving passengers and background checks that do not include fingerprinting. The bill, however, does not include Uber’s language that would define drivers as independent contractors.

Perhaps the most tangible victory for NHLRA was SB 519, which allows for signs to be posted on highways to let drivers know what branded restaurants, hotels and gas stations are available at an upcoming exit. The restaurants still have to pay for them and priority is given — in accordance with federal requirements — of the most convenient establishments, based on proximity and operating hours.

Another budding industry got a boost this session — the booming solar energy industry that was nearly stifled by a two-decade-old cap on how residents and businesses received credits on their excess electrical output.

Utilities opposed lifting the so-called net metering cap, calling the credits a subsidy paid for by those without solar arrays. HB 1116 lets the Public Utilities Commission decided the amount to be credited, but, in the meantime, doubles the cap overall, though this time most of the capacity goes to residences with rooftop solar systems.

SB 378, a related bill, prevents any one company from taking up more than a fifth of the cap available for commercial projects.

The bills had been in the works for weeks, “but a great thing happened in the very end,” said Kate Epsen, executive director of the NH Clean Tech Council.

That was HB 1428, a kitchen sink compromise bill that included bills addressing issues ranging from police training to construction and demolition debris incineration. Tucked into the massive bill was language that ends the raid on the state’s Renewable Energy Fund, which was being used to pay for a shortfall in the NH Division of Homeland Security’s budget. It will once again be used to pay for rebates to those who install renewable energy projects in their homes or businesses.

Just another example of bipartisan cooperation, said Bruce A. Berke, a lobbyist for the National Federation of Independent Business.

“This is some of the best working relationships I’ve seen between the chambers,” said Berke, who summed up the year as “pretty good legislatively for business.”