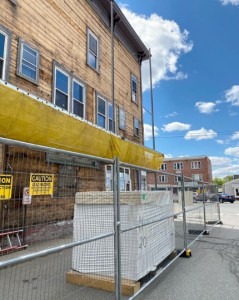 The demolition phase of a major renovation is gritty work, especially when the building is more than 170 years old.

Since late June, crews working on the Parker J. Noyes building renovation in Lancaster have uncovered timber trusses, a built-in safe, labeled drawers for organizing pharmaceuticals from the building’s first 100 years, and gears, shafts and gates from the old elevator.

In 2018, the nonprofit Northern Forest Center purchased the 11,000-square-foot Main Street building – which is on the State Register of Historic Places as part of its community investment work.

Workers on the project found signatures on lumber and wainscoting from past craftsmen who worked on the building, including B.L. Stickney, who signed boards on Nov. 12, 1927. Local businessman David Stickney confirmed that the signer was likely his great uncle Bernard Stickney who, along with David’s grandfather Arthur (a former Lancaster selectman), was a carpenter.

Many door jambs had both handwriting and printed stamps to indicate they came from Thompson Manufacturing, incorporated in Lancaster in 1892.

“We are thrilled to be making visible progress on the Parker J. Noyes building,” said Julie Renaud Evans, program director for the Northern Forest Center and manager of the project. “Covid-19 slowed down our start, but we’re right on schedule now. The demolition crews have been great, painstakingly removing woodwork and floors and sorting it all to be refinished and put back to use in the building.”

Lancaster’s Garland Mill is managing construction for the Northern Forest Center. “It’s been a delight to uncover excellent craftsmanship in the form of heavy timber framing, old tongue-and-groove rock maple flooring, interesting wainscot and historic trim in the building,” said Ben Southworth, president of Garland Mill. “We discovered the rock maple flooring after tearing out a layer of carpet and a layer of tile.”

He added that “it is also instructive to see how aggressively the building has been modified. The original workmanship is excellent, but the engineering standards of some of the modifications over the years were not up to that standard. This is typical of what we find in historic buildings.”

The renovation plan, which will create retail space on the first floor and apartments on the second and third floors, calls for much of the original material to be refinished and reused.

The newly exposed timber trusses on the third floor will be featured in several apartments. The wainscot will be refinished and used in hallways and stairwells. Crews have pulled up hardwood floors, removed nails and will clean and reinstall them throughout the building.

“We were able to salvage the tin ceiling from the first-floor space,” said Renaud Evans, “and it will be featured in Taproot’s retail space.”

Taproot Farm & Environmental Education Center, a Lancaster nonprofit, will occupy the first floor of the finished building for its food hub and gleaning program. “We’re excited to use some of the salvaged wainscoting and perhaps some timbers for the new counter and displays,” said Executive Director Melissa Grella.

With the demolition phase complete, crews have begun structural improvements on the foundation, floors and roof, as well as window replacement. Exterior trim and siding is planned for September. In late fall, crews will move inside to begin rebuilding the interior.

Commonwealth Construction of Lancaster is doing the exterior façade work and window installation; Cantin Construction of Northumberland will make structural changes; David Chessman of Lancaster will do the precise excavation work underneath the building; and McGee Company Inc. will do mechanical work including plumbing, ventilation, heating and air conditioning.

“We are using as much local talent on this project as possible,” said the center’s Renaud Evans. “Working with designers and builders from the region supports local jobs now, and when the building is complete, Taproot’s expanded operations and the new apartments should both make a very positive contribution to the vitality of Main Street.”

The Center has secured significant financing for the $2.5 million project, including a mix of tax credits, public and foundation grants, charitable gifts and impact investments. Based on funds raised to date, $100,000, or 4% of the funding, is from federal sources; $2.4 million, or 96%, is from non-federal sources. For opportunities to support the project, contact Lila Thorne at 603-933-2159 or lthorne@northernforest.org.