June was a bright spot for the New Hampshire residential housing market. In fact, June residential sales jumped to 1,586, the most the state has seen since 2005 and a 7 percent increase over the same time last year.

“I think the key word is stability,” said N.H. Association of Realtors President Alan DeStefano. “We’ve got stable consumer confidence which leads to stability in the market. It’s not exploding, and it’s not stagnating. It’s stable.” 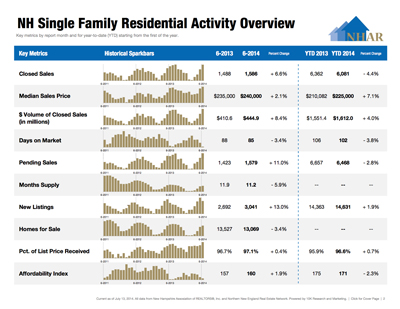 N.H. residential inventory is starting to trend upward as well, following a period of several months with relatively low inventory. Over 3,000 new listings came on the market in June, a 13 percent increase over June 2013.

While there is still less total inventory than there was a year ago, the months’ supply – the number of months it would take to sell off the current inventory at the last month’s pace of sales – was 11.2 months for June. That suggests a residential market with plenty of buying opportunities says DeStefano.

Carroll, Hillsborough, Merrimack and Strafford counties saw residential unit sales increases in the second quarter of 2014 compared to 2013, while all but Cheshire and Coos counties saw an increased median sales price.