Rising water levels — whether from rivers or the sea — have significant consequences for infrastructure health and traffic conditions. At the University of New Hampshire’s Center for Infrastructure Resilience to Climate, researchers are working on better methods to address them.

Dr. Jo Sias Daniel, a professor at UNH, is conducting two research projects that examine how pavement reacts to flooding and groundwater levels, and how officials should respond to each situation.

One project, funded by the Federal Highway Administration, focuses on how to assess pavement to determine the appropriate time to open up roads to traffic.

“The overall goal of that particular project is to develop an engineering-based method for field engineers to use to make decisions on when there should be [traffic] restrictions or when the roads should be closed entirely, based on the performance of the road struc​ture itself,” says Daniel. “Right now, it’s based on experience and judgment. There’s not a whole lot of engineering that goes into those decisions.” 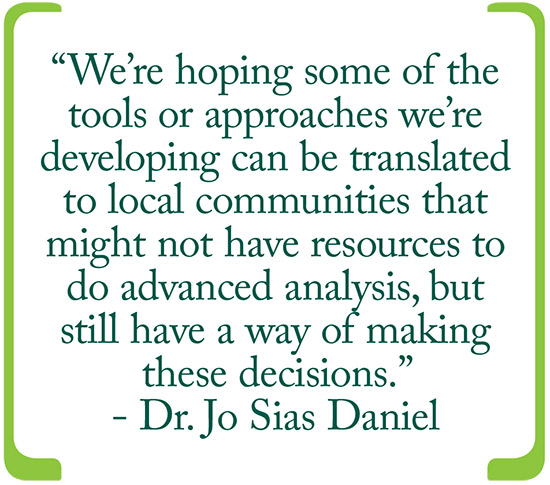 As vehicles are driven over a road, the pavement transfers the vehicles’ load to the native soil underneath, spreading out the load over a larger area. When pavement is wet, its layers are much weaker, says Daniel.

The reason, she says, is because saturated pavement loses some of its stiff quality, which means it can’t carry as much of the load, leading to damage the occurs more quickly than anticipated, and thus requires more maintenance.

By the end of the year, the center will release its risk-based decision-tree tool, illustrating different pathways for a variety of conditions officials must consider and information they would have to gather before determining whether to partially or fully open a road.

“The idea is to have a couple of different states help test it out so we can refine it and make sure it’s workable and improve it as a much as we can,” says Daniel. “We’re hoping some of the tools or approaches we’re developing are not just used by researchers and state agencies but can be translated to local communities, cities and towns that might not have the resources to do advanced analysis that states have, but still have a way of making these decisions and figuring them out.”

In her work at the center, Daniel is also looking at some of the long-term impact of water-saturated pavement and possibilities for new materials to replace sections of road that are repeatedly flooded.

“I think we have a pretty good understanding of how to build things to last longer. The challenges are with the funding part of it. We have to balance the available funds with the engineering solutions, and so it’s not just looking at how long will it last, but how can you build something efficiently and effectively but also maintain it as well, to get that life out of it,” she says.

Materials have changed drastically since the 1950s. One such innovation is asphalt.

“Asphalt was really what was coming out of the petroleum refining process without additional modifications or processing. Now it’s engineered, in terms of additional processing, blending of components, adding modifiers, polymers, different chemical additives to achieve different properties to give desired performance over time,” explains Daniel, who said new materials are constantly being developed.

“A lot of the work that’s going on now is looking at the implications of all these new materials, and if we’re seeing good performance initially does that still last or does it change differently over time with these materials?” she says. “We don’t necessarily have all the right understanding of how what we test in the lab today will perform in the field in 15 years.”

The center is also working with NH Sea Grant, a federal-university partnership, to improve an existing groundwater model of the Seacoast to model how groundwater will rise with sea level and what kind of impact it will have on infrastructure.

“We’re seeing, based on the analysis we’ve been doing, that we’re anticipating there will be, in the next 20 years, some pavements that will be either close to underwater or underwater from groundwater, not just over wash from sea level,” says Daniel.

To what extent depends on the geology of the area and how water travels through the subsurface, says Daniel. If the bedrock cracks are horizontal or the area is sandy, water moves easily, but vertical cracks will stop the flow. Daniel says she expects the impact to only reach a few miles, but says it will have an impact on Pease International Tradeport and the Great Bay area.

“If you have rising groundwater levels, wetland areas will get bigger. And that has all sorts of implications, not just roadways,” says Daniel.

The center is specifically looking at what roads may experience more damage and require more maintenance because their foundations will be wetter than designers anticipated. The project is expected to be completed in the spring.

“There’s a lot of local stakeholders involved — county planning commissions, we have representatives from towns, DOT districts — and the idea would be for them to use some of this information to identify where they might have vulnerable areas and start thinking about how we plan for those and what might be some of the best alternatives to consider,” says Daniel. “There could be things from improving the drainage systems, raising the roadway, using stronger materials in the pavement structure — those are all different options that we’re evaluating — or at times restricting the traffic loads.”