After nearly 50 years at NH Legal Assistance, he plans to step down Oct. 31 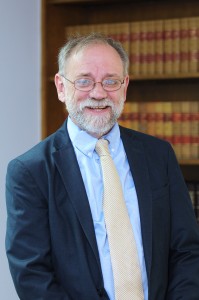 Elliott Berry, one of the most prominent anti-poverty advocates in New Hampshire for nearly 50 years and the architect of many of its legal protections for tenants, has announced he will be retiring at the end of October.

Berry, an attorney at NH Legal Assistance for his entire career, has worked for the agency since 1975, starting as a VISTA volunteer after graduating from Boston College Law School.

“I never had an interest in going to a for-profit law firm,” Berry said. “The truth is, I’m not fascinated by the law. I’m motivated by what I can do with the law for people who have extremely limited power and resources. The opportunities to do this in New Hampshire were quite limited for a nonprofit lawyer. So here I am, and here I stayed,” Berry said.

During his tenure, Berry has worked on thousands of cases for individual clients, as well as numerous appeals and class action cases.

He also handled a series of successful cases in the 1990s that challenged municipal zoning restrictions that precluded development of housing for low- and moderate-income families. He was also instrumental in NHLA’s representation of people incarcerated in state prison, resulting in greater access to rehabilitative programs and mental health care for both men and women as well as the construction in the 2010s of a new prison facility for women in Concord.

“Those are the pieces of litigation that stand out in my mind as quite meaningful to me,” Berry said. “But every time I prevent a family from getting tossed out of subsidized housing, knowing they could not possibly afford rent that is not subsidized, that is also incredibly meaningful, every time.”

Beyond the courtroom, Berry also has been a fixture at the NH Legislature, advocating for reforms that he sees as leveling the playing field for tenants and mobile home park residents and improving access to housing for people with limited means.

He also led NHLA’s unsuccessful lobbying efforts in the 1970s to limit allowable rent increases, as well as a range of successful campaigns to expand tenants’ rights, including codifying the need for good cause for evictions, enabling mobile home park residents to form cooperatives to purchase their parks, and working with other NHLA advocates to create an expedited procedure for tenants to contest illegal lockouts and utility disconnections.

Staff attorney Steve Tower will assume Berry’s role as managing attorney for the NHLA Manchester branch office. Tower joined NHLA in 2015, and his primary work is in housing, public benefits and utility justice.

Lauren Greenwald, a staff attorney in NHLA’s Portsmouth branch office, will assume the role of Housing Project director. Greenwald joined NHLA in 2018, after 15 years as an attorney with the New Hampshire Public Defender.

“Elliott has been a mentor and friend to me since my first weeks at NHLA as a law student almost 20 years ago,” said NHLA Executive Director Sarah Mattson Dustin. “There are countless lawyers here in New Hampshire and around the country who count Elliott as one of their first and most important teachers.”

She added that “there is nobody in New Hampshire who understands housing law from the tenant perspective better than he does – in part because when it comes to state laws protecting tenants and mobile home park residents, Elliott wrote most of them. His lifelong commitment to legal aid work and his relentless pursuit of housing justice in New Hampshire is an inspiration to his colleagues every day. He ends his career in a New Hampshire that is better than the way he found it.”