New Hampshire’s shortage of available housing units has contributed to rapid price increases in the state since the beginning of the pandemic. The prices for single-family homes have provided the most readily available indications of a shortage of housing in recent months, but pre-pandemic data also indicated a very constrained housing market, with nearly half of renters enduring housing cost burdens.

Residents and potential residents facing higher housing costs, as well as higher costs for many other goods and services, may not be able to find suitable and affordable housing in New Hampshire. The lack of affordable housing limits the abilities of these individuals and families to pay for other needs and constrains the growth of the state’s workforce. Targeted investments in affordable housing could help improve access to homes, whether for renting or purchasing, and improve the state’s economy. 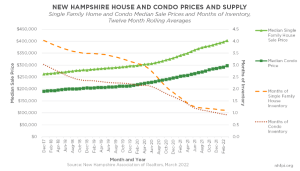 Single-family homes in New Hampshire have been relatively scarce in the state since shortly after the recovery from the 2007-09 Great Recession began in earnest, in about 2015. Construction permits authorized for both single-family and multi-family units fell substantially between 2005 and 2009, with only a partial recovery in the following decade, suggesting significant underbuilding. In 2019, Applied Economic Research estimated that the New Hampshire housing market had as many as 20,000 too few new housing units to satisfy the market demand.

While there is no definitive inflection point, the Real Estate Center at Texas A&M University estimates a balanced housing market has about 6.5 months of inventory. This indicates that if the pace of home sales would lead to all the homes on the market at a single time being purchased within six-and-a-half months, the buyer and the seller would have roughly equivalent negotiating power in a sale.

By the middle of the last decade, the New Hampshire economy was beginning to expand more rapidly following the Great Recession. Wages for lower-income and middle-income workers were finally starting to keep up with inflation after falling behind since the Great Recession, state tax revenues had started to grow more substantially, and the unemployment rate was dropping, falling below 3.0 percent in December 2015.

In March 2017, the supply of inventory had fallen to 3.3 months, and the median sales price had climbed to $244,900. However, median home sale prices began to accelerate as constrained inventory remained the norm. The pandemic pushed the prices of homes up faster, and inventories began to fall very quickly. By March 2022, the median price of a single-family home sold during that month had risen to $440,000, about 80 percent higher than it had been five years earlier, while the months of inventory had fallen 78 percent to 0.8 months statewide. 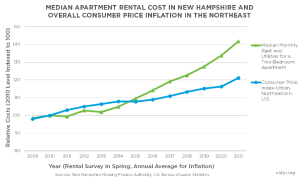 In the same period, between March 2017 and March 2022, the average hourly wage paid by private sector employers in New Hampshire increased by 22 precent, unadjusted for inflation, from $26.68 per hour to $32.52 per hour. That average wage increase is likely skewed high relative to the comparable increase in home prices, as the median home sale price considers the price in the middle of all home sales, and averages can be greatly impacted by outliers, such as people earning very high hourly incomes.

The gap between median wages and average wages can be significant across the economy. A NH Employment Security analysis using a different dataset estimated the June 2021 average hourly wage across all occupations in New Hampshire was $28.24, but the median hourly wage was $21.97, substantially lower, in that same month.

The rental market is a critically important component of the overall housing market, and it is not isolated from the purchaser’s market.

In 2019, nearly three in every 10 households in New Hampshire rented their homes. Renters typically have lower incomes than homeowners, with the 2019 median renter household income in New Hampshire estimated to be $45,000, compared to $95,300 for owner-occupied housing units. Renters who may otherwise be looking to purchase a home may remain in the rental market in response to high prices, meaning fewer rental units are available for lower-income individuals and families who could not otherwise afford a home.

Data from the New Hampshire Housing Finance Authority show increasing costs in the rental market over a longer time period, but an acceleration in the pandemic-era as well.

The NHHFA rental cost survey conducted every spring provides new data on the median price of rent and utilities costs. The survey for 2022 is currently collecting data, but data collected through the spring of 2021 provides insight into long-term cost and vacancy rate trends.

Low rental unit vacancy rates have contributed to the lack of supply and the increases in price. In spring 2021, the NHHFA survey found an apartment vacancy rate of 0.9 percent for all units, and only 0.6 percent for two-bedroom apartments. For the United States overall, the rental vacancy rate in the first quarter of 2021 was 6.8 percent. That national figure has dropped to 5.8 percent in the first quarter of 2022, suggesting continued pressure on the rental housing market nationally.

Unfortunately, individuals and families looking for a home cannot rely on waiting out the high prices, as some may have done successfully during the last significant increase in the cost of housing. The current housing shortage is not fundamentally similar to the increase in housing prices prior to 2005 and the subsequent decline in prices.

While homebuilders were adding significantly to the housing supply in response to increased demand early in the 2000s, a deflation in that demand brought prices down. In today’s market, demand has increased for housing while construction remains well below pre-2006 levels in New Hampshire. A recent influx of residents associated with the pandemic has added demand for places to live in the state, and in rural northern New England counties generally. These factors make a sudden reduction in housing prices, as experienced just before and during the Great Recession, less likely in New Hampshire.

Public policy interventions can help ease both the shortage of physical housing and help improve access to affordable housing for those who would otherwise be unable to find or access suitable housing.

The state has flexible federal funds available to target more resources to affordable housing and provide navigation services to residents seeking assistance with housing costs. Efforts to help Granite Staters at the greatest risk of housing insecurity and to expand the housing supply may help the state’s residents and newcomers find homes for themselves and their families, bolster financial stability, and grow the state’s workforce. Targeted investments in access to affordable housing could help New Hampshire build a more robust and inclusive recovery.