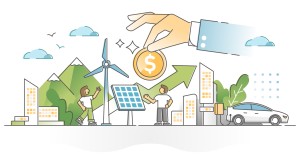 More electric vehicles on the road, heat pumps in many homes, and an increase in renewable energy on the landscape, such as wind and solar. That’s what the country could look like if the federal Inflation Reduction Act becomes law.

The bill passed the U.S. Senate earlier this week, the first time such significant steps to address climate change have advanced this far in Congress. It would not only positively impact New Hampshire’s environment but also its economy, according to an analysis by BW Research commissioned by The Nature Conservancy.

The analysis found that the federal legislation would send $2.6 billion to New Hampshire, creating around 4,400 new jobs and generating $350.7 million in the local economy over 10 years. The bill would also help reduce emissions by 50 percent below 2005 levels by 2030.

“This is the largest climate legislation ever,” said Jim O’Brien, director of external affairs for The Nature Conservancy in New Hampshire. “I think the positives clearly outweigh any sort of investments in continued fossil fuel infrastructure.”

The bill is a compromise that includes concessions to the fossil fuel industry around siting pipeline projects, including advancing a project in West Virginia, the home state of U.S. Sen. Joe Manchin III. That’s drawn criticism from some environmental groups.

“To have the government swoop in and rescue it when it’s apparently not well enough designed to clear the permitting process is troubling,” said Greg Cunningham, the director of the Conservation Law Foundation’s clean energy and climate change program. “If we’re offsetting a clean project with a dirty project, we’re not going to make progress,” he said.

But it’s unlikely the bill would mean large new gas pipelines in New Hampshire or the region, Cunningham said. Five of the six New England states have passed climate laws moving those states away from using fossil fuels. New Hampshire is the exception.

“I think the ship has sailed in this region as far as the likelihood of another new pipeline proposal,” Cunningham said.

The infusion of federal dollars would fund rebate programs, bringing down the cost of electrifying vehicles and homes, and extend clean energy tax credits for another 10 years, making it cheaper to build new renewable energy infrastructure. The bill would also create mandates around fair wages in clean energy jobs.

“This is a pretty big deal for New Hampshire. This is a lot of jobs and a lot of economic activity,” said Philip Jordan, an economist and vice president of BW Research. Sizable tax incentives would dramatically reduce the cost of installing clean energy, Jordan said.

Jordan said the clean energy tax credits are the primary component of the compromise bill passed by the Senate.

Modeling by the Rocky Mountain Institute has shown that a measure like this to accelerate clean energy development could lower energy costs and save Americans as much as $5 billion annually. Developing clean energy would shield ratepayers from inflation and the increasing cost of natural gas, according to the institute.

In New Hampshire, energy costs have skyrocketed as a result of the state and region’s dependence on natural gas for both home heat and power, and the high cost of energy is likely to be a key issue in the upcoming state and federal midterm elections.

The jobs created by the legislation would be spread across a couple of sectors, including new positions in the power industry and transportation, as well as forestry and agriculture.

The timber and logging industry in New Hampshire has been hit hard economically in recent years, and the shuttering of paper mills has decreased both jobs and population in the North Country.

The U.S. House is expected to act on Friday.