‘We are just treading water’ 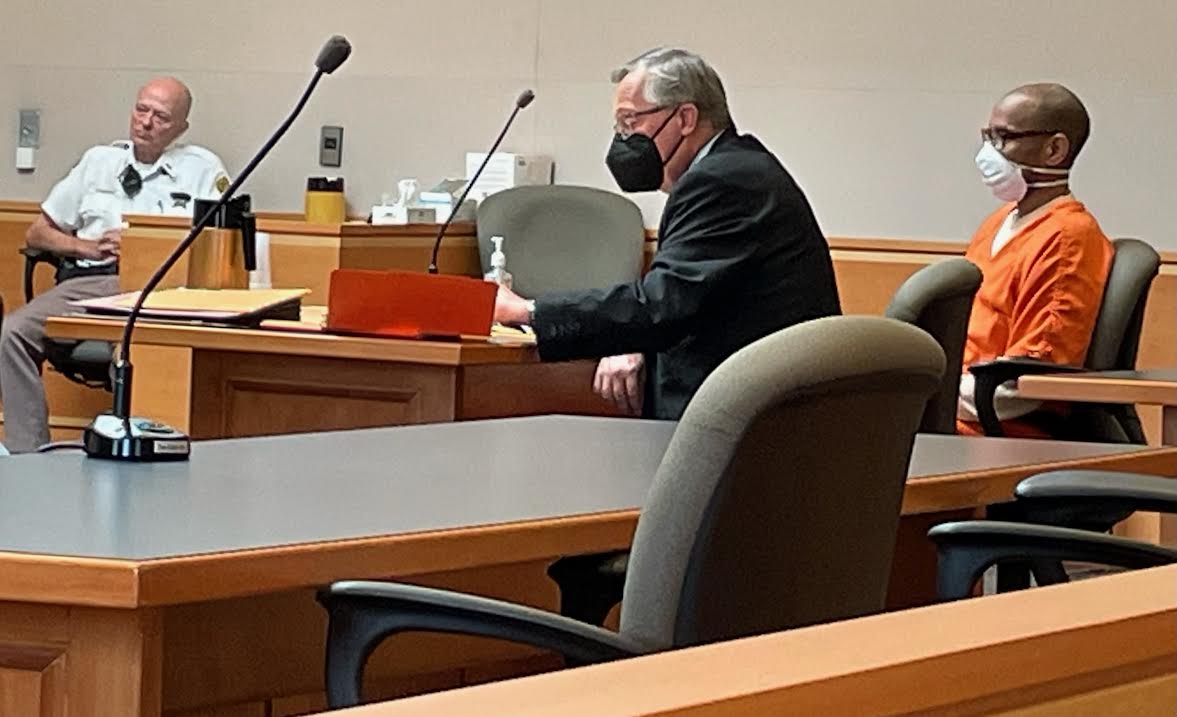 Attorney Michael Ramsdell delayed his retirement to take on indigent clients after learning so many had no lawyer and no money to pay for one. (Annmarie Timmins/New Hampshire Bulletin)

Crushing caseloads had driven a mass exodus of public defenders, leaving 185 criminal defendants too poor to hire an attorney facing incarceration with no one to defend them. Would the lawyers around the table take some of those cases for as little as $60 an hour, a fraction of the $350 to $450 hourly rate their firms typically charge. And regardless of how much time and staff each case took, their payment would be capped at $1,400 for a misdemeanor and $4,100 to $8,000 for felonies.

All said yes. One, Michael Ramsdell, a former criminal prosecutor now at Sheehan Phinney, delayed his retirement to take several. While this mitigated the crisis, it has not resolved it. Legal advocates say it is now time for lawmakers to step in and fulfill their constitutional obligation to provide indigent clients facing incarceration a free lawyer.

Raising the rates and caps is estimated to cost $3.6 million annually according to the New Hampshire Judicial Council, which oversees the indigent defense program. Without the increase, recruiting and retaining lawyers for indigent defendants will remain a significant challenge, legal advocates said. Making the temporary pay raises to public defenders permanent is estimated to cost $2.3 million annually.

“Right now we are just treading water,” said Supreme Court Justice Patrick Donovan, who is heading the court’s Criminal Defense Task Force, formed a year ago to address the crisis. “We need more resources. We need more attorneys to start taking these cases. But people can’t afford to take these cases and make a living because you are not just losing money with that case, but also losing money on other cases that you can’t accept while doing that case.”

Asked about increasing the hourly rate increases, Gov. Chris Sununu’s chief of staff, Jayne Millerick, said he has already supported additional funding for indigent defense and “remains committed to the exceptional New Hampshire indigent defense program and the outstanding attorneys that work tirelessly to represent their clients. Given that the assigned attorneys rates haven’t increased for decades, Governor Sununu is supportive of this process moving forward to seek additional funds from the legislature for the proposed hourly rate increases.”

His position on making the temporary pay raises to public defenders permanent remains a question.

“The Governor is not yet prepared to make long-term financial commitments through general funds relative to the request by the state’s public defender program, given economic uncertainty,” his office said in an email.

But legislators must first agree to include increases in the state budget.

One, Rep. Bob Lynn, a Windham Republican member of the House Fiscal Committee and former Supreme Court chief justice, said he’d be open to budget increases but would want specifics, including the extent the state is relying on contract attorneys, which sign agreements with the state to take cases at reduced rates. He would also want to know how the proposed hourly payment compares the going rate for attorneys.

“I understand the importance of the entire indigent defense program,” said Lynn. “$60 an hour seems pretty low for an attorney’s compensation. I could be proven wrong on that, but I would be surprised.”

Republican Rep. Karen Umberger, R-Kearsarge, who serves as chair of the Joint Legislative Fiscal Committee and House Fiscal Committee, both of which make funding decisions for the indigent defense program, said she also supported the increases. “We as a state, in my opinion, cannot let this go on for much longer,” she said.

The Public Defender Program typically takes about 85 percent of indigent cases, declining only those where it has a conflict of interest. Fourteen percent of the remaining cases are primarily sent to contract attorneys who sign annual agreements with the state to take indigent cases at $60 to $100 an hour, depending on the severity of the charges. The last 1 percent are given to non-contract lawyers that can be persuaded to take the case regardless of the pay cut, said Sarah Blodgett, executive director of the New Hampshire Judicial Council, which oversees the state’s indigent defense program.

The pandemic and increasing complexity of cases flipped that equation after public health concerns and crushing caseloads drove 49 public defenders to resign between 2020 and 2022, taking with them 450 years of legal experience, said Tracy Scavarelli, director of legal services at the Public Defender Program. Temporary pay increases have helped the program bring on 44 new attorneys, but they are far less experienced, with a combined 87 years of experience, meaning other lawyers in the program must devote some of their time to training them.

Losses of both people and experience forced the Public Defender Program to restrict the number of cases it accepted for the first time in about 25 years, Blodgett said. It cut its cases from nearly 28,000 in 2019 to about 14,800 this year.

Only juveniles, already incarcerated clients and people charged with a major crime, such as homicide and sexual assault, could count on getting a public defender, according to Scavarelli. The situation has improved since the pandemic’s early days, she said, but some of the Public Defender Program’s offices around the state continue to restrict new intakes; nearly 1,000 cases are on hold now, 712 in circuit courts and 282 in superior courts.

Those resignations and subsequent loss of legal experience triggered the crisis MacDonald and Donovan aimed to address in their August meeting with lawyers at the court.

The response was immediate.

Ramsdell, who pushed back his retirement, took several of the oldest cases. In one, the prosecutor dropped the charges against his client just before trial, replacing them with two lesser charges the client pleaded guilty to.

“The system only works if both the prosecution and defense are represented by capable attorneys because mistakes are made,” said Ramsdell. “Police officers and investigators by and large do a good job, but they don’t always get it right. We should never have someone who goes unrepresented solely because they can’t pay for a lawyer. That is a low threshold for a society we would want to live in.”

Michael Lewis, a former homicide prosecutor now at Rath, Young, and Pignatelli, said he has taken about 20 cases.

“Anyone who has been a prosecutor and really has a sense of the system … knows how important it is to have a check from the other side that is zealous and is focused entirely on the interest of the defendant who is being prosecuted by the government,” Lewis said. “You want the government, when it’s exerting that kind of authority over people, even in the worst cases, to be resisted and to be scrutinized.”

Raising the alarm and awareness

When indigent cases began piling up in September, MacDonald asked Donovan to form and lead the task force. Of seven recommendations it made in its October report called on the state’s legal advocates to raise awareness of the crisis. At the New Hampshire Judicial Council, Blodgett has taken that on in a big way, looking to Massachusetts and Vermont for lawyers willing to take on indigent cases and putting together a training on the particulars of New Hampshire law.

“I think people don’t understand how important (indigent defense is) until they know somebody who has a criminal charge and no lawyer,” she said.

The other recommendations include creative recruitment strategies (among them, asking retired lawyers to take cases), faster ways of resolving cases, and more money for public defenders and contract attorneys to attract and retain both. Legal advocates have had some success with that last one.

The Executive Council voted in March to give the Public Defender Program an additional $2.3 million to temporarily boost public defender salaries.

And other lawyers are now paid an additional $100 if their client is incarcerated. But neither measure is a long-term solution, Donovan said.

And they want lawmakers to increase state funding to boost the hourly rate from $60 to $90 for misdemeanors and for felony cases from $100 to $125. (That is still lower than the $158 an hour the federal government pays lawyers to take on federal indigent cases.)

Attorney Dave Vicinanzo, an attorney at Nixon Peabody, which took about 30 indigent cases, said the increase in the hourly rate will be important. So will a public service pitch.

“There’s a special trust reposed in lawyers that goes beyond merely making a living, merely doing what you need to do for yourself,” said Vicinanzo, a former assistant U.S. attorney. “I feel that lawyers should as a matter of professionalism be giving free time or reduced time for the good of the civil justice system.”

Ramsdell had two other no-cost solutions.

Allow attorneys to satisfy their continuing legal education requirements by taking indigent cases and prioritize those cases on the court docket. To avoid lost time, courts regularly schedule multiple hearings for the same time in the event a lawyer or defendant isn’t present. That can mean hours-long waits, especially problematic for lawyers agreeing to cut their hourly rates and reduce their time for other cases.

In one case, Ramsdell said he and a colleague forfeited $9,000 in legal work after hitting the $4,100 cap for a felony case.

“I believe if the court wants a similar effort by large firms (to take indigent cases) again, there are things the court could do that would make it easier on them to handle these cases,” he said.

Both ideas were among the recommendations of the task force, but Donovan said he doesn’t anticipate enough support to move either forward.

If Ramsdell were making the pitch to other colleagues to take on cases, he’d start with this: A just society relies on everyone having a competent criminal defense, even if they can’t afford it.