Volinsky: Why I am running for governor

I believe New Hampshire deserves a governor who will create opportunities to improve people’s lives, not one who serves only his friends and special interests. Having lived in New Hampshire for more than 37 years with my wife Amy and with a lifetime of experience as an advocate, I would like to be your governor to ensure that we all share in New Hampshire’s prosperity. 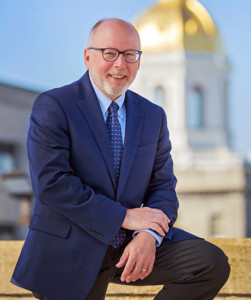 I know that having a strong advocate makes a big difference. I have fought for fairness and against injustice my entire career. I have represented victims of workplace discrimination and people injured by big corporations that peddled harmful products. At age 30, I won the reversal of an illegal death sentence before the U.S. Supreme Court.

Every child in our state deserves an opportunity to succeed. I don’t come from a wealthy background. My father worked as a mechanic and maintenance man. My mother raised four children. I am the only one in my family to attend college — which I did on scholarship and by working summers and during the school year.

I graduated from high school in Levittown, Pa. Levittown reminds me of the mill towns in New Hampshire. When the mills close, people’s livelihoods are destroyed. I was lucky to find a different path because I was good at school. Strong schools must remain a path to success.

Creating opportunity is not just a talking point for me. My decades of work to improve schools in New Hampshire as the lead lawyer in the Claremont school-funding case is an example of how I have made a difference. I led a team of volunteers who fought to give all children the opportunity for a successful life through public education and to treat the state’s property taxpayers fairly. We convinced the New Hampshire Supreme Court that a state-funded public education is a cherished constitutional right.

Because the state has never lived up to its responsibilities, sadly, the quality of a child’s education remains an accident of where he or she lives. This was again brought home to me this fall in Berlin when I met a 4th-grader named Aurora who wants to be a doctor. She’ll struggle because Berlin doesn’t have any chemistry teachers.

It is shameful that in our great state we have school systems that lack science teachers and that schools have been forced to ration remedial programs and limit access to training in the trades. Local communities also continue to bear the heavy burden of paying for public education, and there is no end in sight. Years of trying to convince insiders to do their jobs have convinced me that we need a new kind of leadership and that I need to have the courage to run for office in order to make real change.

New Hampshire’s challenges are not limited to school funding. Climate and access to healthcare must also be addressed. We are in a climate emergency. As a grandfather, I worry about the future that I will leave to my grandson and to all of our children and grandchildren. It is a grave mistake to build new fossil fuel infrastructure, like pipelines. We can and should create green new jobs instead.

My view of healthcare is informed by my years as a board member at the Manchester Community Health Center, where I learned about the importance of primary and preventive care and how to deliver good care to people from diverse backgrounds with very different financial and personal resources. Healthcare is a basic human right. We need to build on the health center’s experience to create a statewide healthcare infrastructure. We also need to stop treating women’s reproductive care as a political issue. It’s a constitutional right.

I have learned a great deal about our state government during my two terms on the Executive Council. I have also learned a lot about the current governor. We won’t beat him by trying to out-smile or out-glad-hand him. We must make him defend his record of nominating unqualified candidates to lead important state agencies for his own political gain. We must force him to defend the crushing burden of the property tax and explain why he has become the most partisan governor in New Hampshire history. Finally, we must make the governor defend his nomination of a chief justice candidate with a documented, 30-year history of antagonism towards women’s reproductive rights.

There are many other challenges that our wonderful state faces. We need strong leadership committed to serving all of the people of our state. I humbly ask for your support and your vote. I won’t let you down.

Andru Volinsky, a New Hampshire lawyer and advocate, represents District Two on the Executive Council. He is seeking the Democratic nomination for governor.

Is now the time to talk about race at work?