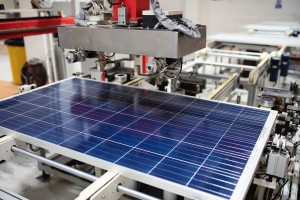 The agency began its inquiry at the request of a U.S. panel manufacturer.

Solar Industry officials claim that a new tariff circumvention inquiry by the U.S. Department of Commerce will imperil the Biden administration’s clean energy and climate-change goals and result in the loss of nearly 70,000 U.S. solar industry jobs.

At issue is a request by Auxin Solar Inc., a U.S. solar panel manufacturer, for a Commerce Department inquiry into certain solar cells and modules assembled or completed in Cambodia, Malaysia, Thailand or Vietnam. Auxin alleges that solar modules assembled using parts and components manufactured in China and subsequently exported to the United States illegally circumvent U.S. trade tariffs imposed on solar cells and modules manufactured in China.

In making its anti-circumvention inquiry, the Commerce Department must determine whether the process of assembling or completing merchandise in another foreign country (in this case, Cambodia, Malaysia, Thailand, and Vietnam) is minor or insignificant. In determining whether assembly or competition is minor or insignificant, investigators must consider several factors, including:

Along with its circumvention request, Auxin provided evidence suggesting that Chinese solar manufacturers may be attempting to circumvent U.S. trade tariffs by completing solar modules in Cambodia, Malaysia, Thailand and Vietnam.

According to Auxin, the assembly and completion facilities in each of the four countries obtain silicon wafers, silane, solar glass, aluminum frames and other materials required to assemble solar cells and modules for export to the U.S., either from or with the assistance of their Chinese parent companies, which manufacture the components in China.

Auxin further claims that the level of research and development in Cambodia, Malaysia, Thailand and Vietnam, related to completing solar cells and assembling them into modules using Chinese-origin components is minimal.

Auxin also alleges that since only the last two production stages for manufacturing a solar module occur in Cambodia, Malaysia, Thailand, or Vietnam, investments by Chinese solar conglomerates to build solar cell and module production facilities in those countries are low, as little as $7.7 million. By comparison, the forge and manufacturing facilities needed for the first three production stages – to produce the necessary polysilicon, render multi-crystalline-silicon ingots and cut or grow silicon wafers – required capital investments of upwards of $2 billion to establish in China. Consequently, Cambodia, Malaysia, Thailand and Vietnam account for no more than 27 percent of the value of a solar module, despite those nations typically being the last port of call before final, assembled equipment arrives in the United States.

Industry officials have warned the Biden Administration that new tariffs on solar cells and modules imported from Cambodia, Malaysia, Thailand or Vietnam, could jeopardize the president’s clean energy goals and climate agenda, especially if increased tariffs lead to significant delays or cancellations of solar energy projects scheduled to enter service in 2022.

Still, it may already be too late. According to a survey conducted by the Solar Energy Industries Association, at least 80 percent of respondents reported that the Commerce Department’s investigation would either have a “devastating” or “severe” negative impact on solar energy development. More than half of the respondents also agreed that the announcement of the Commerce Department’s investigation has already resulted in significant solar equipment and generation project delays and cancellations.

Even Jigar Shah, a top Biden official at the Department of Energy, conceded that the Commerce Department sets a “very low bar” when presented with tariff circumvention cases. He. then suggested that disappointed solar businesses, “curse the system and then get to work.”

Mark W. Dell’Orfano is an attorney of counsel at Sheehan Phinney. His practice focuses on advising clients in the energy, mining, natural resource, private equity and technology industries.