Trouble on the trails

While North Country is seeing economic benefits of OHRV boom, some homeowners see an invasive nuisance 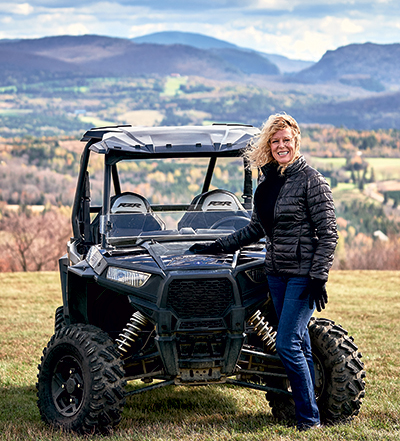 Corrine Rober, owner of Bear Rock Adventures, an OHRV and snowmobiling rental company on Main Street in Pittsburg, argues Class 5 roads have been essential to make connections from one ATV club to the next. (Photo©Yankee Magazine/Mark Fleming)

Corrine Rober, owner of Bear Rock Adventures, an OHRV and snowmobiling rental company on Main Street in Pittsburg, argues Class 5 roads have been essential to make connections from one ATV club to the next.

“Ride the Wilds” is an enticing, visceral marketing slogan that has been used to promote the trail system for off-road vehicles in the North Country. The campaign to promote a recreational adventure with access to 1,000 miles of roads and wooded trails through 15 towns has been overwhelmingly successful in drawing visitors to the region.

And it’s spawned a boom in outdoors equipment providers in the region, including Dalton Mountain Motorsports in Lancaster, Jericho Outdoors in Berlin, Absolute PowerSports in Gorham, F.B. Spaulding Co. in Lancaster, MOMS in Groveton and Bear Rock Adventures in Pittsburg.

“There’s a lot of good people that come up and vacation, and they really like it,” said Keith Roberge, captain of the Coos County Sheriff’s Office. “I talked to a family from Connecticut that made a week of it and started in Gorham, and they actually rented a pontoon boat in Pittsburg. It’s unique that we have that available here.”

Recreational events like the Jericho ATV Festival in August at Jericho Mountain State Park and RiverFire in October have also introduced visitors to the vacation sites.

“We have more properties that have been purchased for use as seasonal and vacation homes as a result of direct access to ATV trails,” said Carol Porter, Gorham’s town clerk and tax collector, who has noticed the uptick over the last three years. “We have more inquiries from prospective buyers to ensure the properties they are looking at have direct access.”

In Pittsburg, 85 percent of homes are second homes, according to Francine Rancourt, a Realtor with RE/MAX Northern Edge Realty in Colebrook. “ATV was not asked about much two or three years ago, but now we’re hearing it all the time.”

But not everyone is praising the economic benefits of the trails. In fact, residents who own homes along OHRV trails and roads that became part of the trail system are seeking relief from the influx of OHRVs.

“There are places in Coos County where citizens are exposed to hundreds of OHRVs 40 feet from their front porch,” said NH Rep. Wayne Moynihan, D-Dummer, who is sponsoring six bills this session relating to OHRVs; four of them are opposed by the New Hampshire Off-highway Vehicle Association, or NHOHVA, which represents 23 ATV clubs statewide.

Nearly a decade ago, selectmen from North Country towns agreed to open public roads up to OHRVs, enabling riders to access gas stations, restaurants and motels without trailering their OHRV to their truck.

Previously, OHRV riders would “ride for a couple hours, and they’d go home,” said Trails Bureau Chief Chris Gamache. “They weren’t spending time in the hotels and restaurants of the North Country. So once the systems were connected, you could ride from Gorham to Pittsburg, stay up there and go back the next day.”

But sharing public roads with automobiles to get from point to point has led to traffic running through residential areas. In Colebrook, 24 miles are dedicated to OHRV access, and 21 of those miles are town roads going through neighborhoods, said Coos County Commissioner Dick Harris.

House Bill 498 would prohibit OHRV operation on Class 5 roads and HB 683 would grant rights to property owners abutting certain highways and rail trails, which NHOHVA argues would shut down riding and result in lawsuits.

“It’s been eight years in some towns, and I’ve had selectmen tell me, ‘The reason we allowed this is because they told us it was temporary,” giving the ATV clubs time to work with landowners to find alternate routes, said Moynihan. However, he added, “there are OHRV operators that are taking their wheels off and putting on road wheels because they’re on roads so long they’re wearing out their expensive road tires because there is so much town road involved in this system. And several people came to me because this is a sign this thing is permanent and it’s being built into our communities.”

There are particular times in the summer, such as holiday weekends and festival dates, that draw particularly large crowds.

Two summers ago, said Gamache, “Polaris Adventures brought up their Camp Razor to Jericho Park and they had a big name professional band give a concert, so everyone flooded to the Gorham-Berlin area. All of the campgrounds were full, and 8,000 ATVers went up for the weekend — that’s a lot of traffic. So the increase in events has brought a lot of people and brought a lot of strife to abutting communities where the main connecting routes are.”

“I’ve chosen to live in Gorham purposely because I knew I wanted to have a certain amount of peace and quiet we could get in a small town community,” said Diane Holmes, a resident whose family has owned property in the area since the 1940s. “We purposely live here to remove ourselves from the hustle and bustle of cities and have chosen to make our lives here, knowing we might have given up high-wage salaries, but our quality of life is important to us.”

Holmes is one of 13 residents who have filed a lawsuit against the town of Gorham to require it to enforce its zoning ordinance and remove the OHRV trailhead that is a southern entry point to the extensive trail system.

“People are miserable. I’ve had people crying about the impact this motorsport has had on their lives because some Class 5 roads have been turned into OHRV trails,” said Moynihan, who has discussed the issue with state agencies, including NH Fish and Game Department and Bureau of Trails to find solutions.

Corrine Rober, owner of Bear Rock Adventures, an OHRV and snowmobiling rental company on Main Street in Pittsburg, owns several hundred acres of land with OHRV trails, but argues Class 5 roads have been essential to make connections from one club to the next.

“It’s that connection from one club to the next that made that system promotional, because if you only have 40 to 50 miles, it’s not a draw. It’s the fact you can ride and go to the services and go out to lunch and go to a sugarhouse and have ice cream and have these experiences, that happens because of those Class 5 roads,” said Rober. “For me, these Class 5 roads get shut down, I’m out of business.”

“That’s the crucial factor for Coos County,” said Steve Clorite, president of the North Country OHRV Coalition, which launched the marketing of the trail system. “If we don’t have that connectivity, people [will] prefer to go to Maine or West Virginia — they’ll go to a trail system where they can ride continuously.”

Word has already spread about the issue to potential homebuyers around Colebrook and Pittsburg, said Rancourt, who one decided against purchasing a camp until the debate over accessibility was cleared up. She also mentioned an owner who is talking about selling his camp because he wants to be ahead of the game if the OHRV access near him closes down.

If Class 5 roads were removed from the trail system, “I don’t think it would be the same,” said Matt Martel, of RE/MAX Northern Edge Realty in Berlin. He said the accessibility of OHRV trails to homes is “crucial to our survival up here.”

“We’ve always had people looking for camps near hiking trails, but the majority of the camps are in Milan or Dummer, not so much Berlin and Gorham,” said Martel. “Since people can drive right from their house, they’re buying in-town lots and homes in Gorham and Berlin, so that’s helped the market incredibly.”

The “sheer volume” of OHRVs has placed a burden on NH Fish and Game, said Lt. David Walsh of the agency. In 2018, he said, 976 OHRV warnings and summonses were issued, 30 percent of them for operating on land without the owner’s permission.

“Statewide, we have the same amount of officers that we did in 1950. In 1950, we didn’t have the search and rescue we do now, and there weren’t ATVs or snowmobiles,” said Walsh. “If you look at the state, they put a lot of effort into the positives of this type of recreation, but they should go hand-in-hand to cover enough law enforcement.”

To help curb troublesome behavior, the Coos County Sheriff’s Office uses $7,000 from Fish and Game, as well as an OHRV on loan from Polaris, to patrol trails on summer weekends, said Roberge.

Gamache of the Bureau of Trails said he and volunteer-led ATV clubs have been looking for alternative trail routes, to take paths off the roads and into the woods.

“I go to a lot of the meetings with the riding groups and they would rather be in the woods as well, so finding them trails off the roads would be beneficial,” said Walsh, who noted residents could be less impacted by the activity if towns worked together to be consistent in setting their rules regarding riding times and making them early enough to account for riders who leave a wooded area last minute.

“As long as local roads are open in an open-ended manner, there’s no incentive for the clubs to do the blocking and tackling of establishing a real off-road network,” said John Petrofsky, a Washington, D.C., resident whose family has owned property in Stewartstown for three generations that abuts a dirt road part of the trail system. 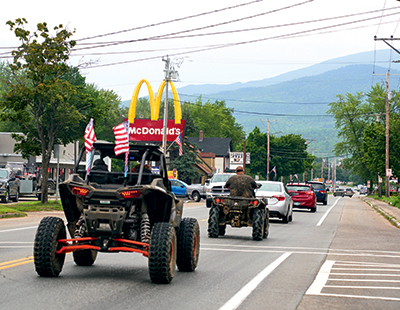 OHRVs drive down Main Street in Gorham, which is the southernmost entry point to the North Country OHRV connected trail system. (Photo by Yankee Magazine/Mark Fleming)

In the meantime, Gamache has been hoping to alleviate some of the tension. One goal is to erase the “Ride the Wilds” term coined and trademarked by the North Country OHRV Coalition, a group of stakeholders from four chambers of commerce and 10 ATV clubs that received a grant from the Neil and Louise Tillotson Fund and  a federal grant to promote the Ride the Wilds marketing campaign in 2013.

“‘Ride the Wilds’ brings up images of the lawless Wild West, which is not the marketing we want for the area for those towns,” said Gamache.

Clorite agreed, “We’ve really toned down our marketing.” Their Facebook page now promotes rider etiquette and informs riders that 80 percent of the trail system is located on private land, permission that could be taken away if access is abused.

“We’re looking at changing the marketing to talk about the Coos OHRV System and identifying what the northern county of New Hampshire has to offer,” said Gamache, pointing to the potential of the mountain biking community as well as traditional area draws like hiking.

The debate over OHRVs also has raised the issue that New Hampshire hasn’t developed a statewide trail plan in 30 years to determine how to fit in different types of recreational users, said Gamache. He is looking into federal grant opportunities to fund a trail plan, but the grant requires a municipality or organization to apply.

“Everyone wants more and wants to be outside, and that’s a good thing, but we’re all in the same footprint.”