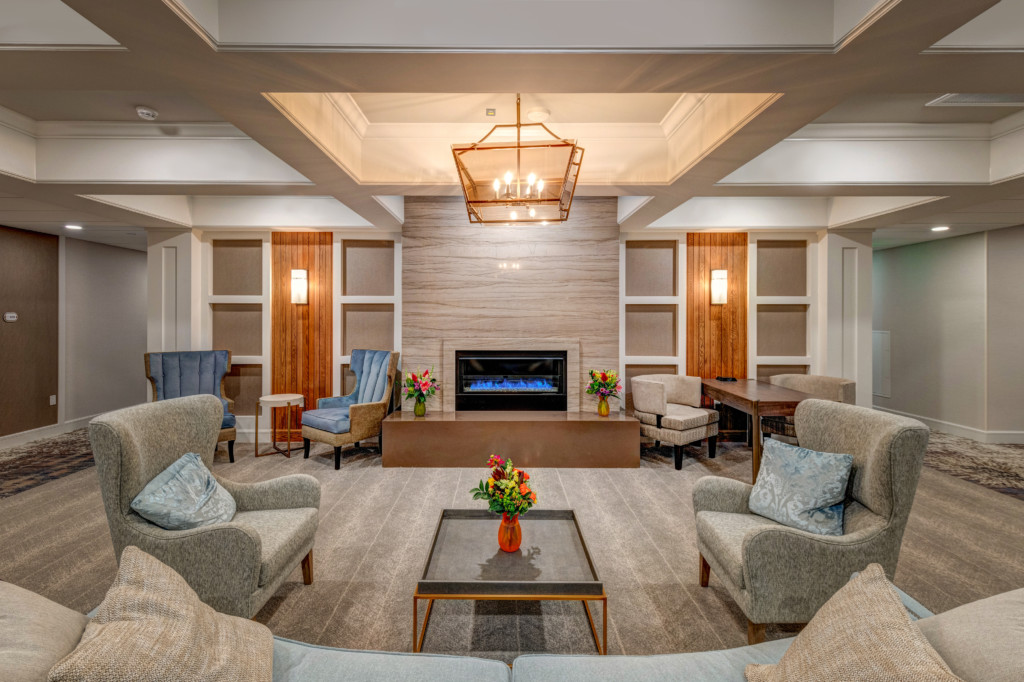 When the final phase of The Hotel Concord opened earlier this year, the revitalization of the state’s capital city was given an immediate upgrade.

This 38-room, four-diamond boutique hotel located in the heart of Concord’s downtown, and overlooking the Merrimack River and gold dome of the New Hampshire State House, represents a new level of accommodations in the city.

“Every room, every detail, was custom designed and thought out to create a very comfortable but sophisticated space — something elegant you don’t see anywhere else in town,” said Jason LaCombe, president of SMP Architecture.

LaCombe’s Concord-based firm oversaw the construction, build-out and fit-up of the building — a six-story, Class A structure previously used as office space.

“We were the team in-town who figured out how to make the design fit within the existing building,” SMP’s Project Manager Anthony Mento said.

That meant shuffling existing tenants to better locations, cleaning up spaces and renovating two floors back from the gutted structure. By the end we touched every floor including a fitness club and corporate meeting spaces. SMP — along with ZDS Architectural Design, of Providence, Rhode Island — helped to design a one-of-a-kind destination in the heart of the state capital.

“It’s a unique experience, from the guest’s point-of-view,” LaCombe said. “From how the lobby is laid out to how it’s very thoughtful yet casual, and how it would make the experience unique in Concord. It far and away exceeds anything else in town. I think that’s why they’ve been so successful since it opened.”

Rooms are located on the fourth and sixth floor of this mixed-use building and reflect the attention to detail SMP implemented throughout the project, and the expectations of hotelier David V. Shamoian, General Manager Susan O’Donnell and building owners Michael and Jamie Simchik. The guestrooms, which are each completely unique in design and feel, include amenities such as luxury linens, original artwork and oversized marble tile bathrooms. Business travelers can expect complimentary Wi-Fi, Amazon Echo Dots and multiple USB charging ports, and can take advantage of the fitness center and three of the finest meeting spaces in the city. Large windows allow for plenty of natural light, and many rooms overlook Concord’s Main Street and provide unmatched views of the state capital.

“The northwest corner of the sixth floor, overlooking the downtown, looks right at the gold dome of the State House,” LaCombe said. “The entire sixth floor has great views. If you’re facing the northeast, you’re looking out over the Merrimack River, and when you’re sitting on the balcony, your sightline is looking right at beautiful trees and hillsides.”

The street-level lobby is a welcoming entrance, with comfortable seating, an abundance of natural light and a warm, inviting fireplace that helps communicate the elegance of the hotel.

“Key Stone Carvings fsbricated a monumental stone fireplace that divides the lobby from The Lobbyist bar which is done in white macaubas stone with an edge detail called ‘waterfall edge grain matching,’” Mento says. “All the grains align and wrap horizontally. The way it was executed is perfect. It’s so dramatic that it creates a statement of how the whole project looks.”

While the results are breathtaking, they didn’t come without some effort. Mento worked nearly full time on the project for six months. The level of detail in each of the 38 unique rooms necessitated a nearly unprecedented level of attention.

“Everything was planned — down to where the outlets and switches go to coordinate with the furniture,” LaCombe said. “We had to make sure everything fit and flowed and worked well. It’s rare that we get into that level of coordination.”

It hasn’t gone unnoticed. Earlier this month, the Hotel Concord was awarded the coveted AAA Four Diamond rating — one of only a handful of hotels in the state to achieve that standing and confirmation that the level of design and service are top-notch.

“It has completely transformed the building’s identity in the city,” Mento said. “From the entrance, when you step out of your car at the sidewalk, through the doorway, into the lobby — the whole thing has a completely new appearance.

“And now we’ve brought it all the way to the roof.”

The City approved adding architectural LED lighting accents to the underside of the roof canopy, so in the evening the soffit glows with varying colors. The eye-catching, understated detail is yet another element that makes it stand out, and draws attention to a vibrant, rejuvenated city center.

“This is a six-story building in the heart of downtown Concord, which has just gone through a revitalization,” LaCombe said. “This project has sufficiently rebranded the building from an office building to a hotel. [The lighting] promotes not only the hotel, but it draws people off the highway into our renovated Main Street. It helps bring people into the city to show off what’s been done.”

Inofab, a local custom manufacturing company, created the entry canopy located at the main entrance at the front façade and fabricated a series of exterior balcony dividers on the sixth floor penthouse.

The Hotel Concord allows guests access to O Steaks & Seafood, the attached parking garage and the Red River Theatre, all without leaving the building.

Key partners in the project included Engelberth Construction, of Colchester, Vermont. The firm also has offices in Keene and now Concord, as well. LaCombe said the firm was a perfect fit for the project, providing analytical professionals who undertook a project necessitating a craftsman’s skill.

“It has a sophisticated elegance where it’s a relaxed space that you can enjoy being in,” LaCombe said. “And I’m more of a process guy, so I was very excited about the process it took to get there. Everyone was thinking about the end product. That’s a unique variance to see people who frequently boil down to production-level construction get into the craft of what they do.”

That care came from the top-down, Mento said. The Simchik ownership had a very high level of expectation and sophistication that guided the project from the outset.

“The ownership team set the standard for quality and expectations,” LaCombe said. “And they were consistent in their decision-making. Everyone watches their budget, but when it came down to quality and guest experience, they stepped up and did it right every time.”