Picture this: You operate a warehousing facility for the foodservice industry. You receive a report that an employee defecated on the floor of the employee break room. There were no witnesses to the event, but you investigated your employees’ time cards, compared the cards to the approximate time of the incident, and narrowed the list of culprits down to two employees. Wanting to take the investigation to the next level, you ask your human resources manager whether it would be lawful to take swabs of these employees’ DNA to see if there is a match with the stool sample taken from the break room.

Instinct and common sense would indicate that an employer could use nearly any means necessary to get to the bottom of such an unfortunate and distasteful incident. And in the name of workplace safety and basic human decency, a DNA swab seems like a justified and minimally-intrusive thing to ask of an employee.

In a recent court decision, however, instinct and common sense gave way to a federal statute called the Genetic Information Nondiscrimination Act. The statute, often referred to as GINA, took effect in 2009, and this case is believed to be the first of its kind to be decided by a jury.

The facts of the case were close to the above hypothetical, except the employer went ahead with the DNA testing and analysis, and the employees agreed to it. Neither employee was found to be the “devious defecator” – as the judge dubbed the perpetrator – and both men kept their jobs.

Yet, after rumors swirled that the two employees were being investigated as the guilty parties, and each was subjected to mockery and embarrassment, they sued their employer under GINA.

Generally speaking, Congress enacted GINA to protect employees from discrimination or denial of health coverage based on genetic predispositions. The statute, which applies to employers with 15 or more employees, also has a section that makes it an unlawful employment practice for an employer to “request, require, or purchase genetic information with respect to an employee.” Only this section of the statute was at issue in the recent case.

The judge disagreed, and ruled that under the plain language of the statute, “genetic information” included “genetic tests,” which in turn included all genetic tests, regardless of what they are used for.

Because the DNA test and analysis at issue was clearly a genetic test, the court found that the employer violated the statute. After a trial to determine damages, a jury awarded the employees $475,000 in compensatory damages and a whopping $1.75 million in punitive damages.

This case is unique and important for a lot of reasons, but three in particular stand out.

The first is that the employees received substantial damages in a case where they did not lose their jobs or suffer other adverse employment action, as that term is traditionally understood in employment litigation. The adverse action – such as termination or being passed over for a promotion – is what usually guides the assessment of damages in discrimination cases. 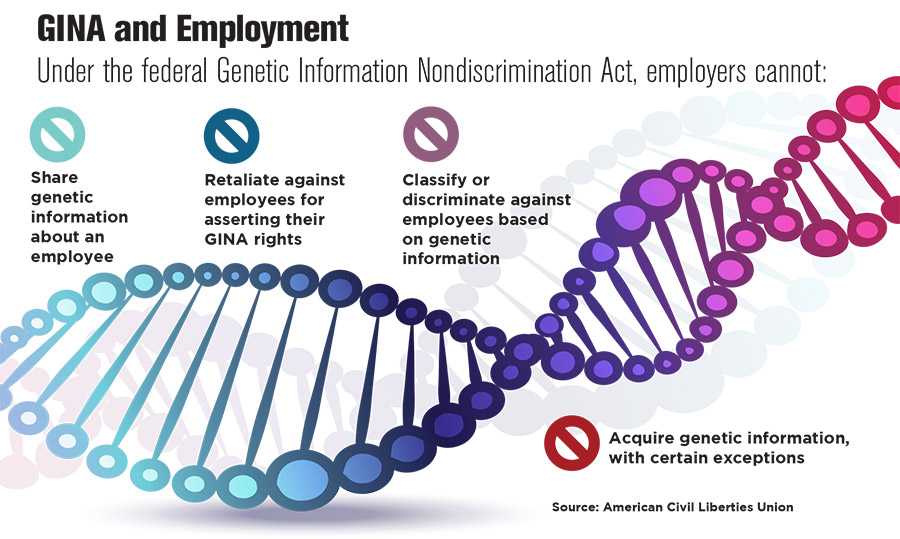 Here, while the employees certainly suffered embarrassment as a result of having their DNA tested and being associated with the incident, they were cleared of wrongdoing and kept working for the employer. The jury was therefore tasked with putting a price tag on humiliation and a violation of the employees’ genetic privacy, the latter of which is something of a new frontier in employment cases.

Another reason this case is important is that the employer initially received a favorable finding at the Equal Employment Opportunity Commission, the agency tasked with handling GINA cases before they go to court. In fact, the EEOC dismissed the employees’ claims entirely. Employers should take note that even with a favorable decision at the EEOC level, a court may later find the complete opposite and rule for the employee.

Lastly, though it won’t be the only case to determine what constitutes “genetic information” or a “genetic test” under GINA, the court’s broad interpretation of these terms to include practically any DNA test, for any reason, is an alarming precedent for employers.

Even in situations where a DNA test seems like the only way to resolve a workplace disciplinary or safety issue, employers should exercise great caution before ordering the test and should bear in mind that acquiring employees’ genetic information is only lawful in six narrow situations:

• As part of voluntary wellness programs

• Through publicly available sources, so long as the employer is not intentionally searching those sources to find genetic information

• For use by employers who engage in DNA testing for law enforcement purposes as a forensic lab or for purposes of human remains identification.

Nicholas F. Casolaro, an associate at McLane Middleton, can be reached at 603-628-1246 or at nicholas.casolaro@mclane.com.