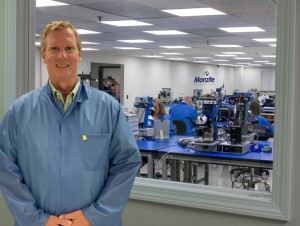 Chuck Valley, a veteran electrical field sales engineer in semiconductor and microelectronic sectors, has been appointed vice president of sales at Nashua-based Monzite Corp., a division of Omni-Lite Industries Inc. Monzite builds high-performance microelectronic components and subsystems for the aerospace, defense, industrial automation, medical device and other sectors. Prior to joining Monzite, Valley worked for 15 years at Linear Technologies, staying on with the company when it was acquired by Analog Devices in 2017.

Eugene Santos Jr., a professor of engineering at Dartmouth College’s Thayer School of Engineering, has been named the principal investigator of a new five-year program to develop an artificial intelligence tool that could help doctors cure cancer, with anticipated funding totaling $3.4 million from the National Institutes of Health. Dartmouth is collaborating with Tufts University to develop the tool, which will analyze patients’ data and the relationship between biochemical pathways that drive health and disease. “We will impact how we treat cancer and a multitude of complex multi-faceted diseases,” said Santos.

BAE Systems has completed acquisition of the Collins Aerospace military global positioning system business that from Raytheon Technologies Corp. The company – formed in April as a result of the merger of United Technologies and Raytheon – was required to sell Collins’ GPS business in order to meet antitrust regulatory requirements. In January, BAE announced its intent to buy the Collins unit for $1.9 billion.

Collins military GPS will be integrated into BAE’s Electronic Systems sector, which is based in Nashua. The acquisition brings “GPS anti-jamming and anti-spoofing technology that enables reliable navigation and guidance for a range of defense missions,” BAE Systems said.

SpotOn Virtual Fence, the Bedford-based dog containment and tracking system, was named the winner of a People’s Choice Stevie Award for Favorite New Products in the 18th annual American Business Awards. The honor comes on the heels of SpotOn being named the winner of a Gold Stevie Award in the New Product-Consumer Electronics category. The People’s Choice Stevie Awards are given after a vote by the public to choose favorite new products and services of the year. More than 87,000 votes were cast in 52 people’s choice categories this year.