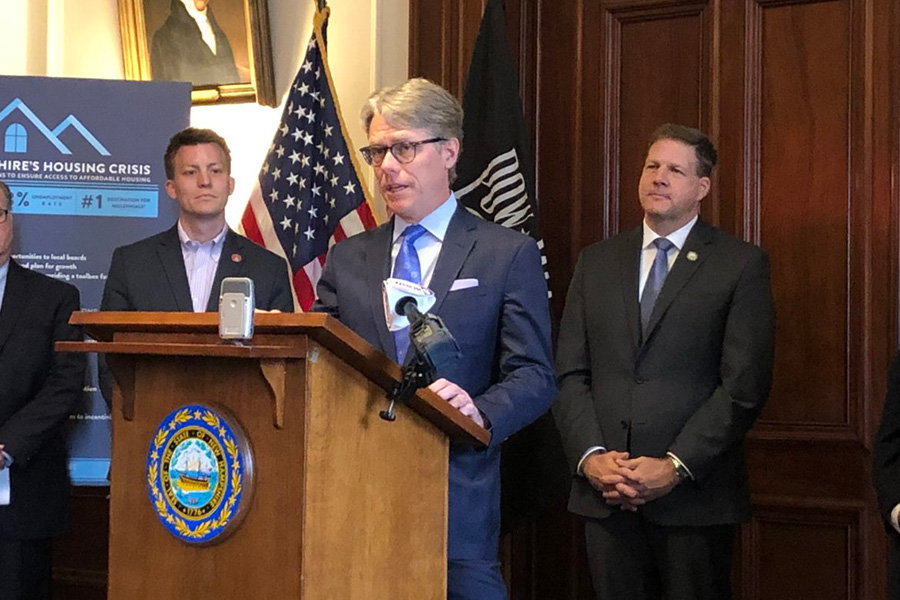 Taylor Caswell, commissioner of the Department of Business and Economic Affairs, discusses the governor’s task force on housing at an Oct. 30 news conference. (Photo by Paula Tracy/InDepthNH.org)

On the heels of a report by the Carsey School of Public Policy that only 2% of the housing stock in New Hampshire is available for sale or rent, Gov. Chris Sununu in October announced that his administration was taking the boldest step into the housing market in living memory. The shortage of housing, he said, has reached “crisis levels.”

Economist Russ Thibeault of Laconia-based Applied Economic Research estimates that the housing deficit falls between 15,000 and 20,000 units, but allows “it could be as high as 30,000.”

As the housing stock has tightened, the median home price has climbed to over $300,000, the highest

on record. The median gross rent for a two-bedroom apartment has jumped 20% in the past five years to $1,347, while vacancy rates in the rental market are under 1% in nine of the 10 counties. For many homebuyers and renters, both prices and rents are far beyond the conventional definition of affordable housing costs as a third of household income.

To tackle the issue, the governor assembled a task force that included Business and Economic Affairs Commissioner Taylor Caswell, Dean Christon and Ben Frost of the New Hampshire Housing Finance Authority and Noah Hodgetts of the Office of Strategic Initiatives, along with several local officials and housing developers. Working throughout the summer with John Formella, legal counselor to the governor, as well as Rep. Willis Griffith, D-Manchester, and Joel Alexander, R-Goffstown, the team drafted an agenda of executive actions and legislative proposals to restore a balanced market.

“It’s been a long time coming,” said Frost, “but we’ve taken lots of little things and put them into one large package.”

He added that “there are lots of factors affecting the housing market, some are within the control of the state, but not all of them. We’ve recommended changing what we can.”

‘A lot of momentum’

The initiative was launched with a strong tailwind from the Legislature.

The 2020-21 state budget includes a $10 million appropriation to the Housing Trust Fund along with subsequent annual increases of $5 million funded with proceeds from the real estate transfer tax. A companion bill to the budget establishes a Housing Appeal Board, a panel of three appointed by the Supreme Court to hear and decide appeals of decisions of local land use boards bearing on housing, providing an alternative to what are seen as costly, cumbersome proceedings in Superior Court.

Senate Bill 43 charged a commission of 20 members with studying “barriers to increased density of land development” while SB 154 convened a committee to study tax incentives for promoting development of dense workforce housing in community centers. The panels were scheduled to report in November.

And Sununu, together with U.S. Sen. Maggie Hassan, D-NH, have urged the Trump administration to expand federal funding for construction of accessible and affordable supportive housing for those with disabilities.

Advocates also point to the Legislature’s enactment in 2017 of the accessory dwelling unit law requiring municipalities to permit internal or attached housing units, along with an option to allow detached units, in all zones where single-family housing is permitted.

The task force’s recommendations fall into three categories: expanding the capacity of local land use boards to tailor zoning ordinances and regulations toward expanding and diversifying housing stocks; ensuring planning and permitting processes are predictable and transparent; and accelerating investment in housing development. Some recommendations will be pursued by executive action while others will be contained in two bills — one sponsored by Griffith and the other by Alexander, and both with bipartisan support.

The touchstone of the plan is the 2008 workforce housing statute, which codified and clarified a 1991 decision of the state Supreme Court by prescribing that municipalities “shall provide reasonable and realistic opportunities for the development of workforce housing, including rental multi-family housing.”

Apart from coordinating state housing policy, the council will encourage, equip and enable municipalities with the means to foster a regulatory environment conducive to housing development by providing training, information, assistance and grants. The team stopped short of recommending direct public investment in housing construction, preferring instead to foster conditions and offer incentives to attract private financing.

In particular, the task force recommends that municipalities make greater use of inclusionary zoning, or incentives to build housing units priced within the means of those with low and moderate income.

According to Noah Hodgetts of the Office of Strategic Initiatives, of the 234 municipalities, 71 explicitly allow workforce housing, 22 of them with workforce housing multi-family overlay districts. However, he found that only 49 of these municipalities have provisions in their ordinances allowing developers to build to greater densities than otherwise allowed in return for designating a share of the units, generally 10% to 20%, affordable. He noted that many of these same municipalities also levy impact fees (80) and have growth management ordinances (25).

Meanwhile, Elliott Berry of New Hampshire Legal Assistance said defining affordability as a percentage of median household income puts even affordable units beyond the means of thousands of households. The state median household income tops $73,000 and is more than $65,000 in half its 10 counties (Hillsborough, Rockingham, Merrimack, Strafford and Belknap), including four of the most populous. — MICHAEL KITCH

“It’s a carrot, not a stick,” Griffith said, explaining that the task force recognized “we are walking through minefields” and chose to use incentives and assistance rather mandates to foster development of workforce housing.

Frost said the task force described its recommendations as “enhancing local control,” by which it meant providing municipal officials with the means to contribute to meeting the demand for more and diverse housing opportunities while sustaining the character their communities.

Thibeault observed that many municipalities adopted zoning ordinances when the state was in the throes of unprecedented population growth and land development. “Zoning was designed to slow growth. The state has an interest in promoting growth,” he continued, “while towns worry that growth will lead to higher property taxes. There’s a tension here,” he said.

Elliott Berry, co-director of the Housing Justice Project at New Hampshire Legal Assistance, called the proposal “a worthwhile effort” and “a series of steps that can move the ball forward.” But he added that “the success of the initiative will depend on how many municipalities are interested in the carrots.”

He said the homeless shelters in Manchester “are over capacity every night, and it’s not even cold yet.” He feared “it may take decades, if ever, to produce enough housing to loosen up vacancy rates in the rental market.”

To spare the uncertainty and costs arising from prolonged permitting and appeal procedures, the task force proposes setting timelines for both land use boards and the Superior Court. Planning boards would have 65 days and zoning boards, which now are not subject to timelines, 90 days to reach decisions while the court would have 120 days to hear and decide appeals of board decisions.

Meanwhile, the Housing Appeals Board will serve as a less costly alternative to appealing decisions of land use boards to the Superior Court. It will apply the same legal standards without diminishing the rights of any party.

Significantly, the board is authorized to rule on “proposals for workforce housing, including but not limited to whether the municipality’s land use ordinances and regulations provide a reasonable and realistic opportunity for workforce housing” and “whether the local land use board has imposed conditions of approval that render the proposal economically unviable.”

Ari Pollack, a land use attorney and counsel to the New Hampshire Home Builders Association, described the Housing Appeals Board as “very good news for homebuilders.” He said that satisfying regulatory requirements represents “upwards of 25%” of the cost of housing projects and the costs and time of appeals proceedings adds to that.

To add a measure of fairness to the appeal process, the task force recommends granting courts authority to award attorneys fees and, more significantly, require parties appealing decisions of land use boards to post a bond to indemnify the prevailing party from costs and damages if the court upholds the board’s decision. Appeals can lead to costly delays, imposing costs on both municipalities and developers for both municipalities. The awarding of fees and posting of bonds is intended to discourage frivolous appeals.

The task force further recommends that municipalities post all local fees — application fees, building permit fees, impact fees, sewer and water fees among them — on a single schedule and assess all fees as part of the application process. If the project changes in the course of the process, the fees would be recalculated before it is approved.

While changes in the regulatory climate are intended to draw private capital into the housing market, the task force also recommends a handful of measures to increase both public and private investment.

One proposal is to apply tax increment financing, or TIF, which has traditionally been applied to funding public infrastructure in support of economic development, to residential projects.

TIF financing allows municipalities to delineate so-called TIF districts, then apply a portion of the future tax revenues that accrue from the annual increase in assessed value from new construction, expansion or renovation of property within them to service borrowings used to fund public improvements within the district.

Carmen Lorentz of Lakes Region Community Developers and former director of the New Hampshire Division of Economic Development, explained that a municipality could use TIF funding to construct the infrastructure — roads, water and sewer — for a residential subdivision, which would lower the price of the finished units.

“It’s my favorite part of the governor’s plan,” she said.

The task force also proposes amending the Community Revitalization Tax Relief Program, which authorizes municipalities to suspend increases in property taxes stemming from the rehabilitation or replacement of designated buildings. Current law allows for up to seven years of tax relief for buildings with new residential units and up to nine years for projects with affordable housing. The proposal is to extend the period of tax relief.

Other recommendations include adding a deduction to the business profits tax for investment in workforce housing developments and a reducing the RETT for purchases of homes priced below $300,000.

Griffith said he expected “some pushback” on the proposals, noting that the House rejected the Housing Appeals Board last year and legislation will be filed to repeal it this year.

“There will be a lot of public hearings and committee work,” he said. “I believe we’ve taken the right approach by incentivizing behaviors that will help us overcome the immediate shortage. More homes at the right prices are good for everyone.”