PUC hears possible Eversource bid to buy them all 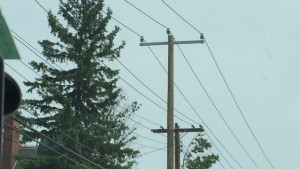 If you’re in Eversource’s service territory, the utility poles in your area could soon switch ownership.

At the end of hours of testimony over the course of two hearings on the sale of many of the state’s utility poles, Patrick McHugh, an attorney representing Consolidated Communications, said state regulators’ jobs were straightforward.

“There is a fundamental question for the commission, and that is: Who should own the poles?” he said.

That’s an important question, parties involved agree, because keeping the poles safe and the trees around them trimmed allows utility customers to get stable electricity and telephone service.

But the case before the PUC is more complicated than just ownership. The state’s Consumer Advocate and the Department of Energy say ratepayers would lose out in a deal Eversource and Consolidated have asked state regulators to approve. Many of the details of that deal are confidential, pending a final decision by the Public Utilities Commission about whether the purchase price and other information should be public.

Right now, Eversource and Consolidated own many of the poles in Eversource’s territory together. But the companies have had disputes over who should pay for trimming the trees around the poles. Consolidated stopped paying for maintaining the trees in 2019, resulting in millions of dollars in unpaid “vegetation management” bills from Eversource.

Now, Eversource wants to buy all of the poles. Jessica Ralston, an attorney representing

At the hearing, Eversource said it would be good for it to own the poles because it would increase the reliability of electricity service.

“Customers will benefit through an improvement of reliability and resiliency of the pole inventory,” she said. “Outages and restoration costs can be avoided by a more proactive inspection and replacement of poles, so the poles are capable of withstanding physical impact.”

New Hampshire’s consumer advocate Don Kreis, who argues on behalf of ratepayers at the commission, agrees Eversource would be a good owner of the poles.

“The electric company is the most important user of utility poles,” he told NHPR. “Its electric wires are at the top of the pole and the most vulnerable to weather related disruptions. And so it makes sense for the electric companies to have a primary responsibility for maintaining them and replacing them.”

But Kreis said the deal Eversource has negotiated with Consolidated Communications is too expensive for ratepayers, who could end up footing the bill.

“This deal and the terms of this deal are extremely disadvantageous to ratepayers because the company is simply making too many concessions to Consolidated,” Kreis said in the hearing.

David Wiesner, legal director for the NH Department of Energy, also expressed reservations. He said the department is not opposed to Eversource owning the poles, but parts of the transaction – including the purchase price, and how the companies will resolve the dispute over the money Consolidated owes Eversource in tree trimming expenses – gave him pause.

“It’s those specific deal terms that have the potential to adversely affect Eversource customers,” he said.

The purchase price for the poles was held confidential in the hearing, pending a final decision by the PUC about whether that information should be public knowledge.

Eversource confirmed through testimony that the purchase price is above the net book value of the poles – how much the poles are worth in Consolidated’s accounting records.

Eversource and Consolidated have asked the commission to keep details of the sale confidential, saying each company could lose out on future negotiations if those were made public.

Kreis pushed back on that request, saying the information – including the purchase price of the poles, which could be foisted on Eversource ratepayers – should be public.

The PUC Commission issued an order in April saying the purchase price should be public information, but other parts of the agreement can stay confidential. Consolidated and New Hampshire’s Consumer Advocate have both filed motions opposing that order. Those motions are still awaiting a decision from the commission.

In closing statements, Don Kreis told commissioners he hoped they would reject the proposed agreement, so Eversource could go back and negotiate a better deal for the poles.

But that suggestion sparked a rebuttal from Consolidated’s Patrick McHugh, who expressed frustration with those questioning the quality of the deal, asking if Consolidated should “just give the poles away.”

“It’s easy to second-guess and say, ‘We don’t like this deal, so go figure out how to do it elsewhere,’ and one way you can do it is keep pressing the issue, sue for how long it takes,” McHugh said. He referenced ongoing litigation between that company and the New Hampshire Electric Co-op, which is suing Consolidated over issues including unpaid tree-trimming bills.

That lawsuit, filed in 2020, alleges Consolidated owes the co-op more than $2 million on past vegetation management invoices.

“Is that really something the commission wants Eversource to really do?” he asked.