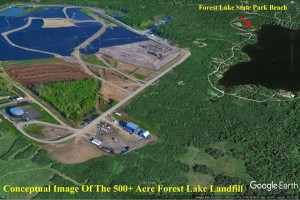 A landfill proposal in northern New Hampshire is kicking up dust in the state Legislature, with some lawmakers supporting a bill to ban landfills near state parks. Nobody likes to imagine a pile of trash next to scenic lake, but lawmakers are also concerned about shrinking landfill capacity and state interference in local zoning laws.

The bill was prompted by one very specific proposal in Coos County. Casella Waste Systems Inc., a waste management company, is applying for a permit from the New Hampshire Department of Environmental Services to build a private landfill in Dalton near  Lake Forest State Park.

Perhaps unsurprisingly, a group of North Country residents oppose the landfill due to the impact it could have on the local environment and tourist economy.

Another town might have blocked the landfill with local zoning laws.  Dalton, however, is one of a handful of towns in New Hampshire without zoning.  Dalton has since passed “Emergency Temporary Zoning and Planning Ordinances” but it’s not clear if those can stop Casella.

The landfill opponents took their case to the state Legislature, resulting in House Bill 177.  The bill bans any new landfills within two miles of the boundary of any state park, effectively vetoing Casella’s site in Dalton.

HB 177 would not apply to state historic sites and recreational rail trails.  The bill also would not limit the expansion of existing landfills.

Arguments for a ban

Supporters of HB 177 argue that the proposed landfill in Dalton highlighted an important gap in New Hampshire’s laws. HB 177 would protect state parks in other towns without zoning laws.

While landfills may be a necessary part of life, they can have negative impacts on the environment, say opponents of the Casella proposal. Trucks entering and leaving the facility create air and noise pollution. Scavenger birds flock to landfills, resulting in local nuisance and fecal contamination of waters.  Landfill gases create unpleasant odors that can travel for miles.

In recent years, the Coakley Landfill in North Hampton has made headlines for leaking PFAS into the water supply.

The potential environmental impacts on state parks are a concern, but so is the potential impact on state park tourism.  The North Country economy is increasingly reliant on tourist dollars.  Just knowing a landfill is nearby might deter travelers.

Arguments against a statewide ban

Opponents of HB 177 point out there is a looming shortage of waste disposal capacity in the Granite State. According to a 2019 report from the Department of Environmental Services, in the next 10 years New Hampshire will likely see a shortfall in disposal capacity between 20,000 and 120,000 tons per year.

Without any significant changes in the state’s waste disposal, that shortfall could balloon to 1.35 million tons per year starting in 2034. If the state makes it more difficult to build landfills, Granite Staters could face a hefty bill to ship their garbage out of state. Meanwhile, the Department of Environmental Services permitting process for landfills already includes an evaluation of environmental impacts that should protect state parks.

Other opponents of HB 177 argue that the state should not interfere with zoning.  Local governments and private property owners generally have control over the siting of businesses.  If the state starts adding restrictions on landfills, what might stop the state from interfering in the siting of other malodorous businesses, such as dairy farms?  There is a related concern that HB 177 could face a constitutional challenge because it treats public and private property differently.

The House passed HB 177 on April 9, bucking a committee recommendation to kill the bill.  HB 177 now heads to the Senate, which has yet to schedule a public hearing date.

If the bill does pass the Senate, it faces an uncertain future with Gov. Chris Sununu. He has yet to weigh in on HB 177 or the proposed landfill in Dalton.