‘It’s especially pervasive in male-dominated fields like STEM,’ she says 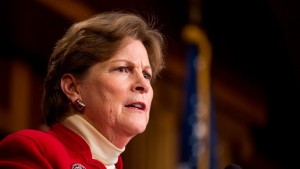 U.S. Sen. Jeanne Shaheen, D-NH, has joined her colleagues in taking steps to combat sexual harassment in the STEM fields and the federal scientific workforce.

Together with U.S. Sens. Richard Blumenthal, D-Conn., and Tina Smith, D-Minn., Shaheen has introduced the Combating Sexual Harassment in Science Act. The bill would investigate factors contributing to sexual harassment in STEM, examine the impacts of harassment and policies to reduce it and spur interagency efforts to stop this harassment.

The legislation is a response to a 2018 report from the National Academies of Sciences, Engineering and Medicine that found that sexual harassment is widespread in higher-ed institutions and contributes to loss of talented, highly trained individuals in STEM.

Under the bill, grants would be awarded through the National Science Foundation for work that helps to better understand the factors contributing to and consequences of sexual harassment across institutions of higher education and nonprofit organizations and to examine interventions to reduce its frequency and impact.

The bill would also direct federal statistical agencies to collect national data on the prevalence, nature and implications of sexual harassment in institutions of higher education, direct NSF to enter into an agreement with the Academies to update the Academies’ research conduct report to include more detailed data points and establish an interagency working group chaired by the Director of the Office of Science and Technology Policy to coordinate the efforts of federal science agencies.

“Sexual harassment exists everywhere, but it’s especially pervasive in male-dominated fields like STEM,” Shaheen said. “Harassment creates a culture of impunity, fear and abuse that too often drives away some of our brightest and most talented minds from the sciences.”

She said the legislation “includes commonsense policies to identify and address factors contributing to harassment and ensure our scientific workforce can thrive. Supporting survivors of sexual harassment and violence will always be a top priority for me in the Senate.”

Shaheen also was a signatory of a letter sent to President Biden calling on him to direct his administration to address sexual harassment in the federal scientific workforce, an action that would be a model for other institutions to follow “establishing a clear, consistent message that sexual and gender-based harassment will not be tolerated during your term is critical to not only improving morale among federal scientists, but also attracting and retaining a highly qualified scientific workforce,” the letter says.