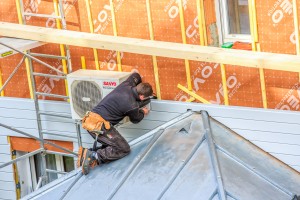 Eversource on Wednesday told about 40 energy-efficiency contractors it works with to stop taking new applications for part of the NHSaves program and to halt energy audits, a move the company said it was forced to make after the Public Utilities Commission rejected the triennium energy efficiency plan on Friday.

The company’s energy-efficiency supervisor, Frank Melanson, also told contractors in an email that the utility will likely try to appeal parts of the order and seek clarification on other points. Melanson said he expects other utilities will also be forced to halt their energy efficiency programs.

Shortly after Eversource’s email, Liberty Utilities followed suit. Kevin Hanlon informed contractors that Liberty is in the same position as Eversource and will pay only for approved 2021 jobs where work has begun.

Hanlon said any customers who sought services through Liberty after April have already been pushed until 2022. “And we also have a big waiting list after that,” he wrote. “Friday night’s announcement from the PUC leaves 2022 clients in the proverbial lurch.”

Edward Marquardt, president of Yankee Thermal Imaging – a company that contracts with Eversource – said he now has nearly 50 customers on hold as a result of Eversource’s announcement and that he will likely have to lay off some of his employees.

“Customers should just be told that the PUC has required new program parameters and you will provide them with details as soon as it’s made clear to you. We fully expect that to cause some very upset customers, but it has to be done,” Melanson told contractors on Wednesday.

William Hinkle, a spokesperson for Eversource, said the company is not scheduling any new appointments at this time due to the uncertainty created by the recent order but that scheduled work will go forward.

“​​A customer could have a project in the queue that’s pending and is unscheduled and they thought maybe we were going to schedule it today or tomorrow – something like that isn’t going to be scheduled for the rest of the year,” Hinkle said.

But Marquardt said that’s not what he was told.

“I talked to Frank to get clarification because right now, like I said, I have 49, exactly, people that have been waiting, that have signed contracts, paid their deposit, and if I haven’t started work on the job, I have to put them on hold,” he said.

Melanson told contractors that rebates will be honored in cases where work is already underway. But if work hasn’t begun, he said, the offer would be “reworked.”

Now, Marquardt has to tell customers that the contract they signed with him may no longer be good because the rebate may change.

The utilities “dumped this on us to tell our customers,” Marquardt said. “In some cases people have been waiting two to three months to get this done before winter.”

Now it’s unclear when they can expect things to move forward. But Marquardt doesn’t blame the utilities; he blames the commission.

Not only does the order make clear the programs will not expand, it also cuts funding for the state’s energy-efficiency programs over the next two years, returning them to 2017 funding levels.

Currently, the NHSaves incentive covers 75 percent of the job, with the rebate capped at $8,000. Both of those amounts are expected to decrease given last Friday’s order.

The decision has drawn criticism from proponents of energy efficiency and may face legal challenges.