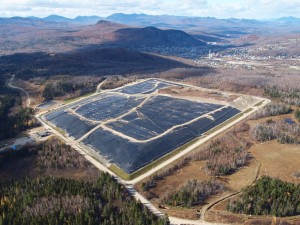 The Mt. Carberry landfill in the North Country town of Success was recently approved for a major expansion with virtually no public opposition.

John Casella is the CEO of Casella Waste Systems, the Vermont corporation that owns and operates the soon-to-be-closed NCES landfill in Bethlehem. He is having a hard time getting permits from the NH Department of Environmental Services to replace NCES with a new, even larger landfill, about five miles away in Dalton.

His recent piece, published in several newspapers (May 6-21 NH Business Review), suggests that a two-year-old study, known as the DSM study, authorized and paid for by Casella, provides the “true cost of eliminating disposal capacity in New Hampshire.”

The only “true cost” that stands out is the $1 billion cost in lost revenues that Casella’s shareholders will bear if Casella does not get permits to build a new landfill in Dalton.

Given that Casella funded the study and is now using it to try to scare legislators, town officials and residents into letting it do whatever it wants, every assumption and conclusion in the DSM study should be taken with a grain of salt—at best.

Casella made available the three-page Executive Summary of the DSM study but has so far refused to make available the full 20-plus page study, despite repeated requests to do so.

I managed to talk to the author of the DSM study, who had a number of interesting things to say, some of which significantly undermine the credibility of Mr. Casella’s conclusions.

What did Mr. Casella say about the study and the conclusions reached? And how believable are those conclusions? Let’s see.

First, he says: “Actively choosing not to add additional capacity … would result in an estimated $75 million in added costs … and the loss of over $190 million in economic benefits.”

There are so many things wrong with this conclusion. At the top of the list: No one is “actively choosing” to limit additional capacity when it is needed and sited appropriately. Just a few weeks ago, NHDES gave permit approval to a major expansion at the Mt. Carberry landfill in Success. Throughout the permitting process there was virtually no public opposition.

The “true” fact is residents are “actively choosing” to protest the Dalton project because:

In fact, if the site Casella chose were in Maine, state regulators there would not even entertain a landfill permit application.

He also says: “Casella has also proposed to invest in a recycling facility that is estimated … to create more than 50 new jobs and result in an economic benefit of over $200 million to the state’s economy.”

To which everybody in should say, “If that is true, please go ahead and do it!” But it’s apparent from Casella employees’ statements that the company will hold the recycling facility hostage and only make that investment if the state agrees to allow Casella to build its misguided and unneeded Dalton landfill project.

He also says: “In addition to the economic benefits … there are reductions in greenhouse gas emissions … due to recycling rates and avoidance of additional transportation ….” Good — another reason to go forward with the recycling facility.

But the estimated reduction in emissions comes solely from construction of the recycling facility, and construction of the Dalton landfill is likely to significantly increase emissions due to transportation of solid waste from sources in southern New Hampshire and the rest of New England. And he conveniently forgets to mention that his company seems to have no concerns about increased emissions that will result from routing trucks going to the Dalton landfill 25 miles out of their way to avoid political entanglement with Littleton, the most politically powerful town in the region.

Mr. Casella: you need to do three things:

Do all three of those things and you will be on the path to restoring your own and your company’s credibility.

Eliot Wessler of Whitefield is a member of the board of North Country Alliance for Balanced Change.