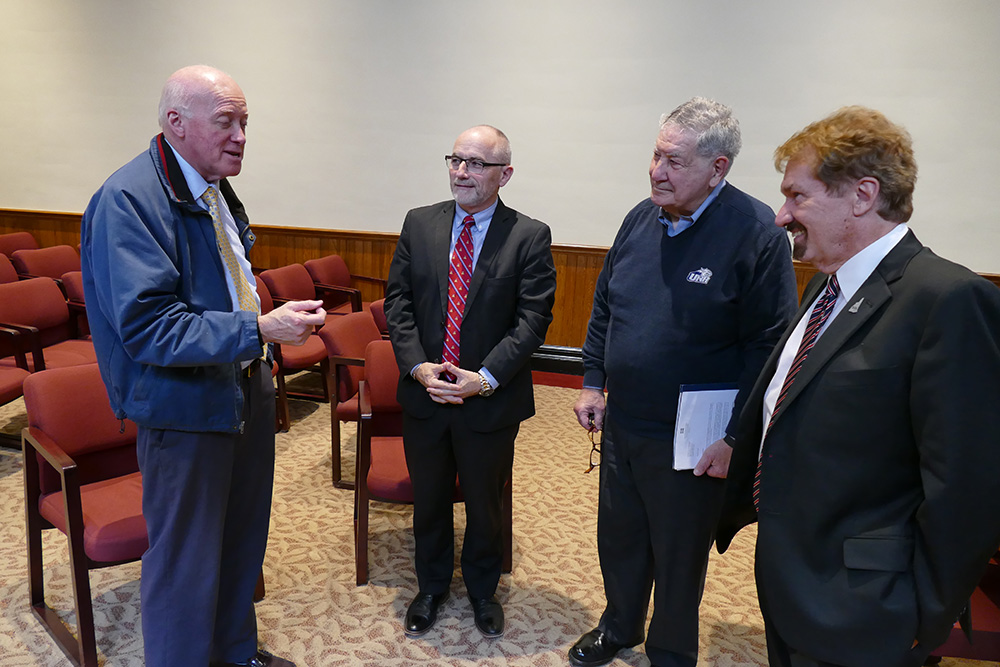 A consortium of business and political leaders is working to strengthen cross-border ties between Canada and the Granite State, and a recent economic summit in Sherbrooke, Quebec, has helped to reinvigorate those efforts.

Billed as the New Hampshire-Quebec Economic Summit 2019 with a theme of “From Neighbors to Business Partners,” the Oct. 8 event at the Delta Hotel featured more than two dozen panelists and other speakers who addressed such topics as opportunities for collaboration in biomedical technology, cross-border business experiences and trade agreements.

New Hampshire’s position as a gateway to the United States and the Quebec-New England corridor, as well as Sherbrooke’s value as a gateway to Europe for U.S. businesses, also figured into discussions.

Participants are building on the foundation laid by the New Hampshire-Canadian Trade Council, established in 1991 following the U.S.-Canada Free Trade Agreement of 1988, noted state Sen. Lou D’Allesandro, D-Manchester, who is chair of the trade council’s board .

According to summit organizers and the Office of the U.S. Trade Representative, Canada is New Hampshire’s second largest trade partner, with exports to the country reaching $668 million in 2018 and representing 11.5% of the state’s worldwide exports. In 2017, Quebec’s exports to the Granite State totaled $690 million.

In a welcoming letter to summit attendees, Gov. Chris Sununu said economic impacts are even greater, with Canada “accounting for over $6 billion in trade.” He said the summit provided “an excellent opportunity to promote good relations between the two regions and discuss ways to further expand our already strong trade relationship.”

The governor urged support for international trade. “The U.S. Congress and the Parliament in Canada must follow Mexico’s lead and ratify the United States-Mexico-Canada Agreement (USMCA, the successor to NAFTA) to bring the trade relationship of our three countries into the 21st century,” he wrote.

Organizers also emphasized the historical connections between New Hampshire and Quebec, noting the generations of Quebecers who moved to such communities as Manchester and Berlin to work in the textile and paper mills when they were economic anchors.

In an effort to further recognize those connections, the trade council also is exploring the creation of a sister-cities memorandum of understanding between Manchester and Sherbrooke to serve as a business catalyst and further build goodwill.

Sherbrooke is about 200 miles and a 31/2-hour drive from Manchester. It is the second-largest Canadian city near New Hampshire, behind Montreal, and summit organizers bill it as “the economic driving force in southern Quebec.”

Panel moderator Pierre Harvey, senior advisor with Harvey International Inc. in Sherbrooke, expressed particular enthusiasm over the potential for cross-border educational, business and research collaboration in the fields of biotechnology and biomedicine, citing the relative proximity of the University of New Hampshire, Dartmouth College and the University of Sherbrooke.

“I really think we’ve hit the bull’s eye with the biotech and biomed,” says Harvey.

Gardner emphasized the importance of the ongoing relationships between New Hampshire and Quebec officials when he introduced the summit’s keynote speaker, former Quebec Premier Jean Charest.

The summit was supported by a Northern Borders grant, said to D’Allesandro, who called the event “a great leap forward” and noted the trade council’s work is ongoing.

Next steps include focusing on the Manchester-Sherbrooke sister cities agreement and “doing something in Coos County to promote economic activity between Coos County and the province of Quebec and Canada, and create some kind of relationship, so that, maybe businesses might think about relocating in the United States,” said D’Allesandro. “Hopefully, we can create some business activity, maybe in Colebrook, or maybe some things in Groveton, some things in Berlin, to reinvigorate that relationship that existed in the past, and keep it going.”