Roadable aircraft are just a few years away from hitting the skies, roads 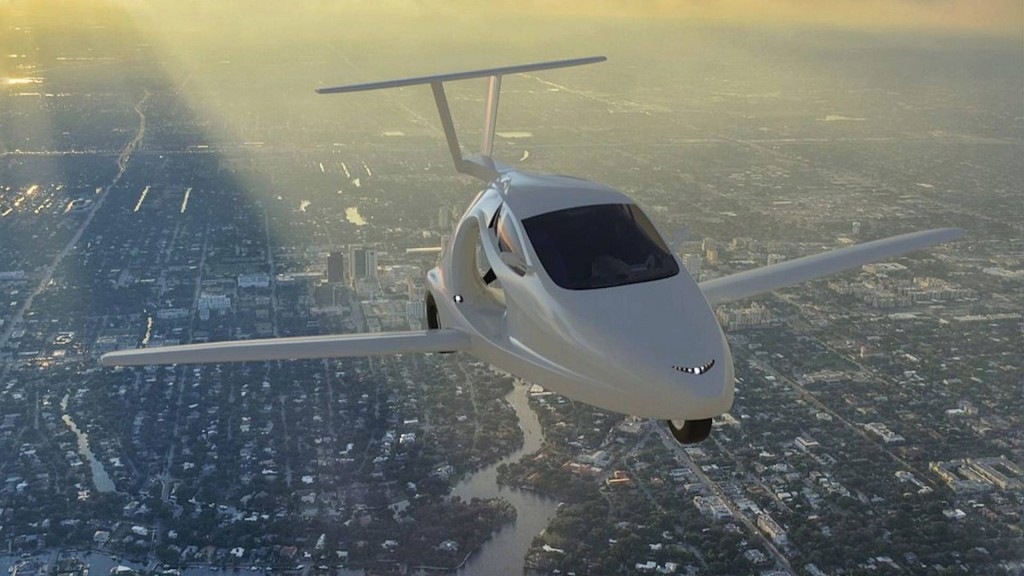 Samson Sky’s Switchblade is an experimental roadable aircraft that is partially built by its hobbyist owners.

The vehicles are small aircraft with the capability to switch to an automobile setting so they can also be driven on the ground, and they are just a few years away from hitting the road and skies in consumers’ hands.

Three companies joined in pushing House Bill 1517 through the New Hampshire Legislature, aiming to kick-start the legalization process that they hope will soon sweep the country.

The bill, which was part of House Bill 1182, one of the omnibus measures passed by the Legislature at the close of the last session, is a shot in the arm to an industry that already is testing their products in New Hampshire.

Woburn, Mass.-based Terrafugia, a subsidiary of a Chinese-owned company, already tests its vehicle at Nashua Airport and European-owned PAL-V has an office at Manchester-Boston Regional Airport in addition to its international office in The Netherlands.

Sam Bousfield, founder of Oregon-based Samson Sky — an experimental roadable aircraft that will be built partially by its hobbyist owners — had not considered New Hampshire as a pivotal location for the launch of his product until he was contacted by Keith Ammon, New Hampshire dealer of PAL-V, to collaborate on the bill and its presentation.

“We’re on the other side of the country. Testing over there wasn’t on the radar screen before this bill,” said Bousfield, adding that the company had already been looking “to site one of our major facilities in some location, and we started to look at New Hampshire only because of this bill.” 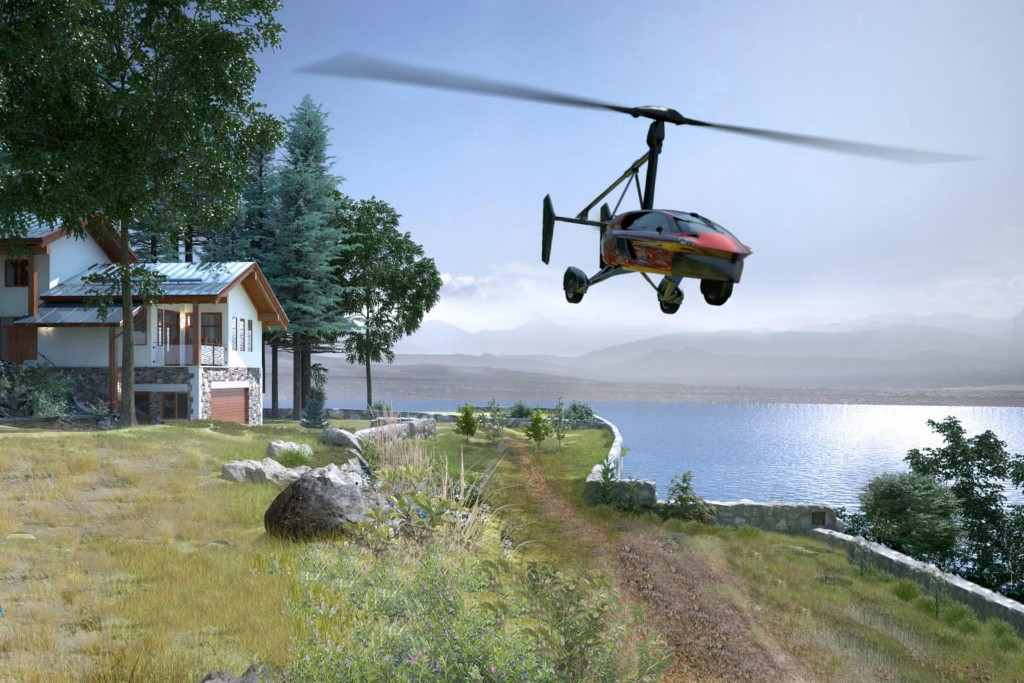 The PAL-V Liberty, a three-wheeled gyrocopter, is currently in product development and testing under the European Aviation Safety Agency.

Attracting industry “was certainly a goal of the legislation,” said Rep. Steve Smith, R-Sullivan, who was approached to introduce legislation by his former colleague, PAL-V’s Ammon, who previously served as a state representative for Hillsborough.

“This is an emerging industry and it would be great if they decided to base here because the minute they’re FAA-certified and can sell these, [buyers] can test them at Manchester Airport and drive them out to the hotel,” said Smith.

There are some promising signs.

When PAL-V, which is developing a three-wheeled gyrocopter, opened an office at the Manchester airport, it quickly found “there’s a pretty good, thriving aviation community here in Manchester,” said Ammon. The flight school, National Flight Simulator, is based just next door.

“It’s a good location for training and eventually a delivery facility,” he said.

Terrafugia, which was founded in 2006 and had done “a bit of flight-testing” in various places, including Lawrence, Mass., decided to expand its testing program a few years ago and build the foundation of what will be a customer care center at Nashua Airport, said Kevin Colburn, general manager of Terrafugia. 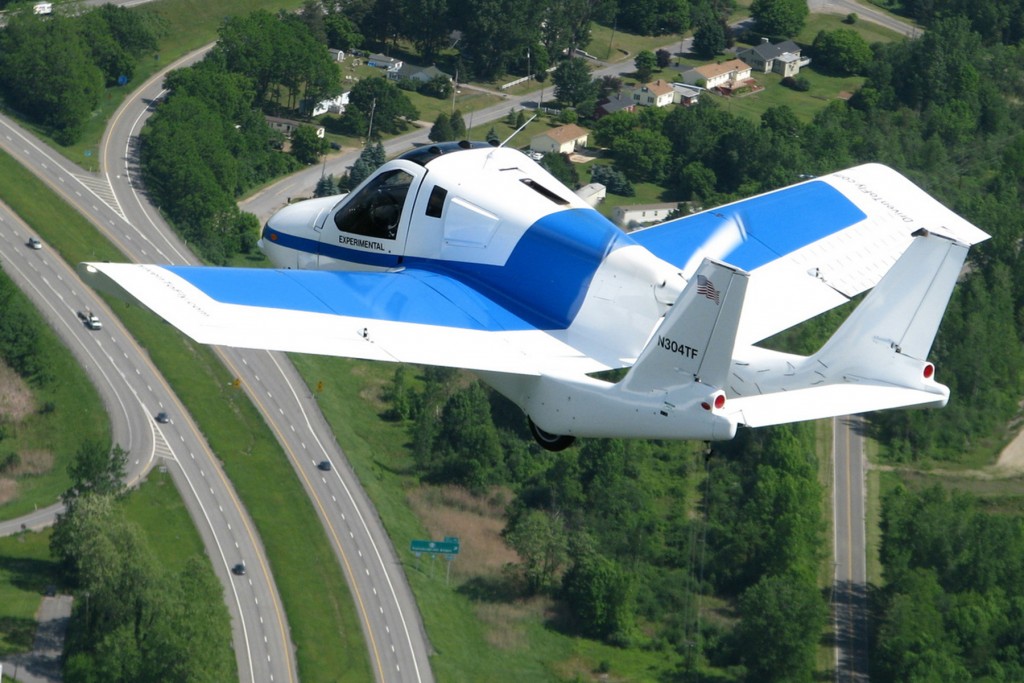 The Terrafugia Transition has wings that fold to fit the vehicle into a standard garage.

“Our product is a light sport aircraft, so most people are not going to be flying those type of small aircraft in and out of Logan or even Manchester [airport],” said Colburn. “It makes sense to be in a little bit of a smaller space that’s accustomed to light sport traffic,” which is what can be found at Nashua.

He added: The new law is “critical for us,” saying that “to our knowledge, no one had tackled that issue [making aircrafts road legal] in the country or possibly the world.”

In the end, the bill itself “ended up being really simple” to put together, said Smith, the sponsor. “We didn’t try to rewrite anything.”

He said he looked for input from the directors of the state Division of Aeronautics and the Department of Motor Vehicles to determine what had to happen to allow the vehicle to drive out of the gate and onto roads. “Getting that buy-in from the agencies that were tasked with public safety and enforcement made the process easier.”

NH DOT and the DMV decided that Federal Aviation Administration requirements for aircraft were more stringent, so FAA registration and annual inspections superseded DMV requirements. In addition, an airplane mechanic must be used to work on the vehicle.

Under the law, owners will need to produce their FAA certification in order to register the vehicle with the DMV, and the roadable aircraft’s number assigned by the FAA will also be used as the VIN (vehicle identification number) by the DMV.

As it stands, it’s unknown what happens when a New Hampshire-registered roadable aircraft lands in another state and the driver takes it on that state’s roads, said Smith. And the vehicle can only be registered in New Hampshire if the owner has property or a business where the vehicle is primarily garaged.

In the mid-2000s, a survey conducted at MIT asked pilots what prevented them from spending more time flying their plane. “Mobility at the destination airport” was one of the factors, said Colburn.

“Once you get to the airport, how do you get to where you want to go? The concept was a flying car addresses all of these, so that’s what they set out to do,” he said.

All three of the roadable aircraft under development can travel three to four hours in the air on automobile fuel.

Terrafugia envisions its roadable aircraft — which look like a traditional small plane, but with wings that fold to fit within a standard garage — to enable aviation enthusiasts with a pilot’s license to travel seamlessly from small airport to small airport without having to waste time renting a car or getting a taxi to their hotel or final destination.

Likewise, PAL-V, which has a helicopter-like propeller that folds in drive mode and a smaller tail propeller, would be more efficient for individuals who live or visit areas where mountain topography can make for long drives.

For example, said PAL-V founder Mark Jennings Bates, he lives in the mountains of British Columbia in Canada. “It’s a four-hour road trip to get to the next town over the mountain range or it’s a 20-minute flight.”

There are more than 5,000 public airports in the U.S., and roadable aircraft can land on a strip of grass if there’s approximately 900 feet of land.

“New Hampshire is a natural place for someone to live and put an airport on their own property and maybe commute down to Boston or centers in the Northeast,” said Ammon with PAL-V.

“We expect our initial customers to be current pilots, but a number of years ago, we took the vehicle to an auto show, and there was line six people deep,” said Colburn of Terrafugia. “We expect we’ll attract people not currently pilots,” he said, although they will have to obtain a sport pilot license to fly one.

He added that several consultants have expressed interest in the seamless travel of roadable aircraft, “where they can go from a suburban area to a rural area, and if they have to fly or drive using traditional means they see one or two clients a day, but with this vehicle they could double their business,” said Colburn.

There are other factors that could drive consumers to purchase the approximately $300,000 aircraft.

“People are starting to wonder how much do they want to travel commercially in this post-Covid environment? What if there’s another pandemic outbreak?” said Jennings-Bates.

Sooner rather than later

The three companies aim to soon hold a vehicle presentation in celebration of the bill’s passage.

All three roadable aircraft are still in the prototype stage, but the companies are confident they’ll start putting customers in their products soon — maybe even by the end of 2021.

But the pandemic has caused some slight hiccups in the supply chain.

“We had a team of 70 people, mostly engineers, in an office environment, so there were work-from-home instructions — it’s probably pushed our delivery timeline a month or two,” said Jennings-Bates.

And Bousfield of Samson Sky said one of his suppliers, a maker of shock absorbers, closed up shop due to the pandemic.

“We couldn’t get shock absorbers for six months. You can’t manufacture those yourself,” said Bousfield, who learned to establish redundancy in his supply chain while he’s in the process of ramping up a bigger volume of production.

PAL-V is currently in product development and testing under the European Aviation Safety Agency — which, when complete in “a couple of months,” will roll over to the FAA, said Jennings-Bates, who opened an office in the U.S. because North America is a much larger market for recreational aircraft. There are more than 215,000 airplanes of all types registered in the U.S.

“There are so many of these airports around and most of them don’t have a tower, the traffic doesn’t demand that,” said Ammon. “The sky is astonishingly wide open once you get away from the major airports.”

Cybersecurity as an employee benefit