With a low overall participation rate in the state, organized labor still tries to flex its muscles 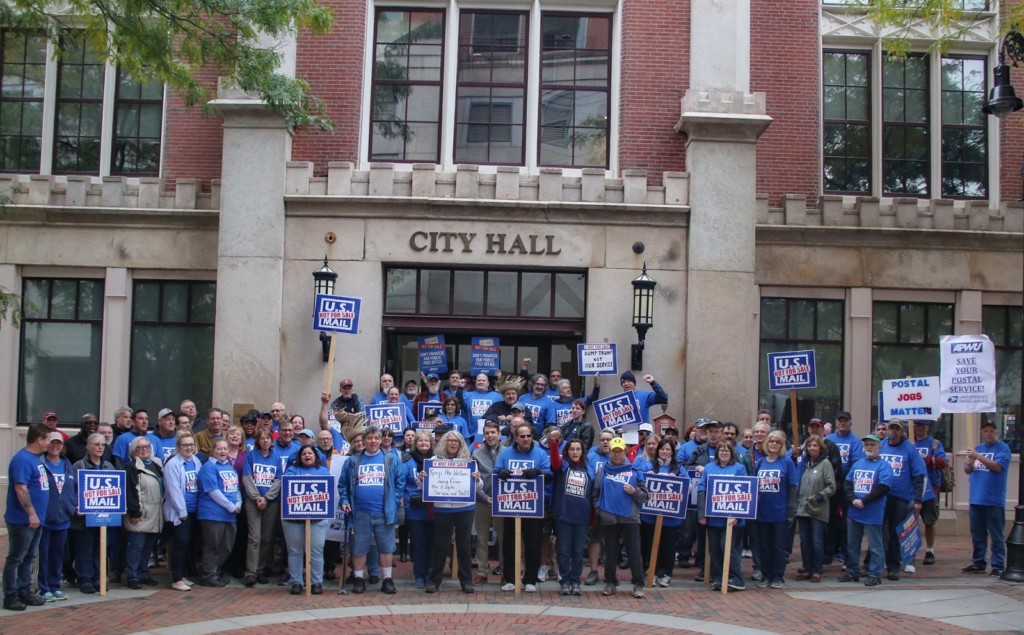 While 11.2 percent of all workers are members of public or private sector unions in New Hampshire — a rate that’s below the national average — organized labor maintains an active presence in the state’s political and legislative landscape.

Earlier this year, the Professional Fire Fighters of New Hampshire successfully sought political backing for the passage of Senate Bill 541, which allows cancer treatment benefits for firefighters to be funded through workers’ compensation rather than their own insurance, resolving issues that caused a measure passed 30 years ago to be ruled unconstitutional by the NH Supreme Court.

“Senate Bill 541 was a big deal to our members. This bill took many twist and turns and took involvement from the governor and his staff to get the bill moved. That takes a relationship and trust and being able to communicate,” said PFFNH President Bill McQuillen.

He said the involvement of the governor’s office in other issues supported by the firefighters, such as the Decennial Retirement Commission, getting a say in gubernatorial appointments to the EMS Medical Control Board and the naming of a new state fire marshal led the union to vote recently to endorse Gov. Chris Sununu for re-election.

In most cases, the backing of a union means more than sending out a press release. “When it comes to election time, we’re good at phone banks, educating our members, talking to family members and voting,” said Don Trementozzi, president of the Communications Workers of America Local 1400.

There are three issues on union leaders’ minds as they anticipate the 2019 legislative session.

The AFL-CIO and member groups such as the International Brotherhood of Electrical Workers have spent years pushing for legislation regarding the misclassification of workers as independent contractors and the state’s construction procurement process that they argue undermine union competitiveness by encouraging companies to shortcut benefits.

“I think most members understand it’s … the last stand for the middle class and that way of life.”

“Absolutely it’s going to come up again,” said Glenn Brackett, president of the NH AFL-CIO. “One of the things the Legislature should act on is responsible contractor legislation — make sure if a company wants to come in here, they’re paying a living wage and provide some healthcare,” as well as having a good safety record.

Worker misclassification and the state’s lowest-price procurement bidding strategy has resulted in a trend of companies classifying workers as contractors to forgo healthcare and other benefits, enabling those companies to produce lower bids, argued Joe Casey, international representative for IBEW and NH AFL-CIO board member.

“Because of our [lowest responsible bidder] procurement policies, in New Hampshire, there’s very little regulation on construction and there’s a lot of unscrupulous contractors that come in to the state, know our laws, take advantage of it, and make it very difficult for the responsible contractor [to bid competitively],” he said.

Another familiar piece of legislation, so-called “right to work” — which allows workers to earn the benefits of a collective bargaining agreement without contributing financially to the union — will continue to be pushed by Americans for Prosperity-NH, a Koch-funded political advocacy group promoting limited government and regulatory restraint.

“What we’ve heard is the unions tend to negotiate on behalf of the union leadership, which happens to be more senior members who focus on better health plans and things like that at the expense of higher compensation, which from an employer standpoint is important for recruitment and retention,” said Greg Moore, state director of AFP-NH. “If you’re trying to hire that young worker, it’s more important to offer that higher wage than necessarily the health benefits.”

By passing right to work, New Hampshire would gain an advantage as an anomaly in the Northeast that could attract businesses, argued Moore. (The closest right-to-work states are Michigan to the west and the Virginias to the south.)

In June, the U.S. Supreme Court ruled that it violated the First Amendment rights of non-union public workers when the the compelled them to pay union fees against their will. Workers were already able to opt-out of paying for political union activities, but had been compelled to pay agency fees to cover collective bargaining.

“We were thrilled with the Janus ruling,” said Moore. “That made all public employees in New Hampshire right-to-work, however that doesn’t do anything about adding to the state’s ability to be competitive, because competitiveness is in the private sector.”

“We’ve been expecting this for a long time,” said Rich Gulla, president of Service Employees International Union Local 1984, comprised of workers from NH Department of Corrections officers to NH Fish and Game to nurses at state hospitals.
“I don’t think we’ve seen an immediate negative impact. If anything, we’ve seen a rise in membership from the decision,” who noted SEIU’s membership density increased by 10 percent to 75 percent of members. 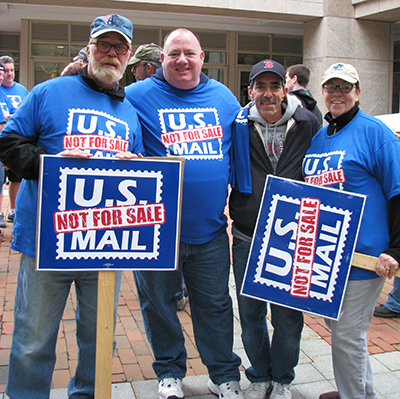 While the national APWU negotiates wages and health benefits, APWU locals negotiate vacation time procedures and how one gets picked to work on holidays.

He argued it was SEIU  that sucessfully pushed the campaign for a living wage, at $15 an hour, which eventually led to Amazon’s recent announcement that it would adopt the hourly wage for all workers.

Since the 1970s, globalization and the resulting business competition has led to a drop in membership in private sector unions in New Hampshire and much of the United States, according to Marc Dixon, an associate professor of sociology at Dartmouth College who has focused on collective behavior and social movements.

But Casey argued that it was deregulation that was undermining the competitive nature of unionized businesses.

“The rising costs in healthcare, the year-after-year increases, have absolutely stalled growth in unions throughout the country because we’re committed to healthcare, so it’s not an option for us,” said Casey. “It has devastated us because we’ve been trying to maintain that health coverage and we’ve lost any kind of competitive edge cause of it. Each one of us in our industries has lost a considerable amount of market share because of it.”

In fact, historically, there has been a strong relationship between union membership and wages, said Dixon.

“We call that the ‘union premium.’ So if you compare the same type of person with the same age and experience, similar occupation, one’s a union member, one’s not, there’s a sizable bump in the 10 to 15 percent range,” said Dixon.

Likewise, the Economic Policy Institute cited Community Population Survey data from the U.S. Census Bureau that shows unions produce improved gender pay equity rations, with women in unions earning 94 percent on average for every dollar paid to unionized working men, compared to 78 cents on the dollars for non-union women. Hourly wages for women represented by unions were also 23 percent higher than that for non-unionized women.

Unionized workers are also more likely to have access to various kinds of paid leave, from paid sick days, vacations and holidays to paid family and medical leave, enabling them to balance work and family obligations, according to the institute.

“There’s been interesting research on flatlining of wages in the middle class since the 1970s, and we’ve noticed the growth in the spread of economic inequality,” said Dixon. “There’s a lot of research that shows union decline has been a central player in that story.”

Doug Ley, a professor at Franklin Pierce University and president of the American Federation of Teachers-NH, argued that the slow rate of growth in wages for positions ranging from electricians to teachers, is one of the causes of the current workforce shortage. 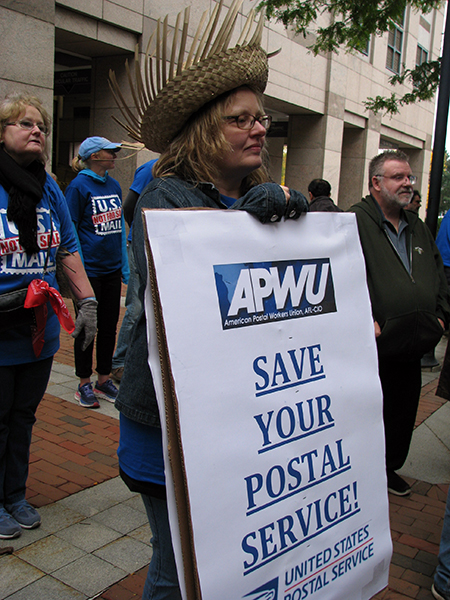 APWU members from Massachusetts wore these hats and joined New Hampshire members as part of nationwide rallies on Oct. 8.

“Yes, the economy looks like it’s roaring, but it’s not equitably distributed – the benefits of it,” said Ley. “The average take-home pay hasn’t budged for a long time, once you account for inflation. We have to go to the taxpayers to get contracts approved in the public sector, and they’re facing the same pressures too.”

Meanwhile, in the trades, IBEW members are offering apprentices an introductory wage of $12 an hour with the potential, after five years of training and trade school (which is paid for by IBEW employers), to earn $23 an hour, or $40,000 a year, when they rise to a journeyman position, and young people are determining that it’s not worth it, said Casey.

“In Berlin, you could make $12 an hour and pay the rent there, but the problem is there’s no work. So where the communities are, there’s construction work, but you can’t afford to live there,” he said, noting he’s seen construction workers pushed out of the Portsmouth, Dover and Rochester area over the past 30 years.

And the industry, whose employers traditionally covered trade school for apprentices, has now shifted costs on to them, yet again creating a disparity in worker benefits between unionized and non-unionized firms, said Casey.

“We went out to the Legislature to try to regulate some of the conditions in construction, and I’m instantly told ‘the market controls all that, Joe.’ But when our competition is now in trouble, because the market is responding to their lack of responsibility to the industry, and they go to the government to try to water down and reduce regulation,” said Casey, who pointed to the Electricians Board voting this year to shorten field requirements for licensed electricians, which Casey argued allows bad-acting employers to take less time to invest in their workers’ skills that unionized employers do focus on, build into their costs.