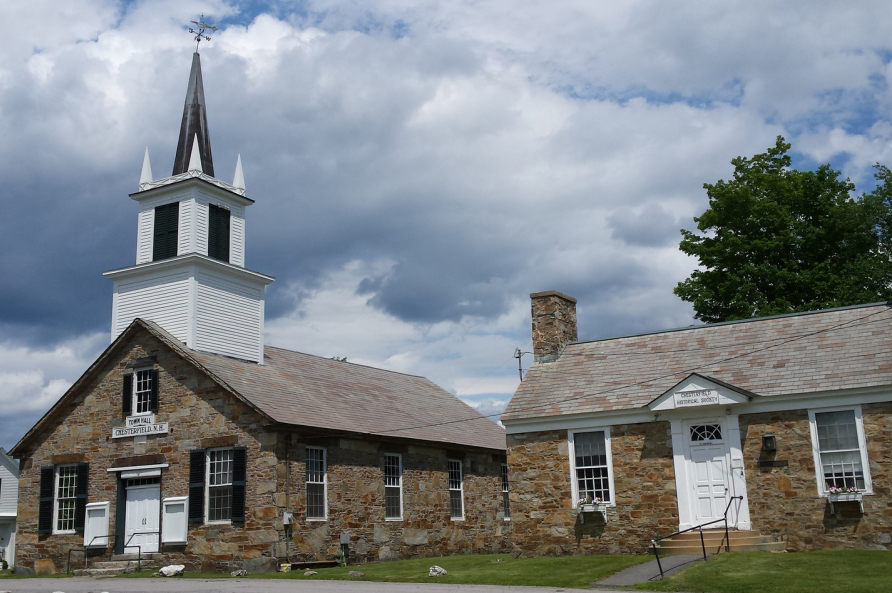 Chesterfield has partnered with Consolidated Communications to buildout fiber-to-the-premise.

Emboldened by the authority to issue bonds to fund broadband infrastructure, rural communities are taking the deployment of high-speed internet into their own hands, frankly because they have no other choice.

Until the passage last year of Senate Bill 170 — which enables a community to issue long-term municipal bonds to help underserved areas meet the Federal Communications Commission’s definition of broadband (25 megabits per second download and 3 Mbps upload speed, or 25/3 capability) — rural communities in New Hampshire were completely at the mercy of industry economics.

But SB 170 is “groundbreaking,” Koester said. The law provides a mechanism by which towns can partner with a provider to buildout internet in underserved areas.

The southwestern New Hampshire town of Chesterfield is the first municipality to embark on the public-private partnership pathway set up by SB 170.

Voters approved a $1.8 million 20-year bond to partner with Consolidated, which will pay the other $2.5 million estimated to complete a fiber optic network for the entire town, or at least those residences that opt in. Each residence will cover a $10 monthly fee to pay back the bond.

Consolidated had initially submitted two RFPs, one that would use copper (DSL technology) to connect homes to the fiber middle mile and another proposing fiber to the premise. As the cost difference for fiber was only $300,000, Consolidated opted to take on the difference.

Chesterfield residents should expect to start getting hooked up in the next nine months, said Brad Roscoe, a former Chesterfield selectman who has led the town’s broadband efforts. The monthly cost of the new fiber plan will be comparable to other internet service options, and Consolidated will not be the only internet service provider in town.

“SB 170 let us do this. And it wasn’t just SB 170, but Consolidated’s ability to pay the interest and principal,” he said, even if the $10 fee will take two or three years for it to cover yearly expenses.

Approximately 20 other municipalities have reached out to Consolidated regarding interest in public-private partnerships, said Carol Miller, the state’s director of broadband and technology.

But Chesterfield’s success story is potentially an anomaly.

“My Consolidated contact is finding people are misinterpreting how far the Chesterfield models applies to everybody,” said Roscoe. “The law’s written so it covers 25/3 capability, not to get fiber. It worked out for us that it costs the same to do fiber or copper installation, and because of our town logistics.”

Koester said he didn’t think the Chesterfield project is “a one-size-fits-all,” but there are “solutions” for other towns.

“We’ll just have to be creative. Consolidated is very open to creative public-private partnerships that make sense for everybody,” he said.

Speaking to NH Business Review last year, shortly after Consolidated acquired FairPoint Communications, Koester touted the company’s upgrades to the New England network, increasing the fastest speeds from 25 Mbps to 80 or 100 Mbps for some subscribers.

The upgrades include DSLAMs, a network device that receives signals from multiple DSL customer connections and puts them on a high-speed backbone line. (Consolidated owns 30% of the fiber backbone in the state, in some areas using fiber for the last mile while often opting for copper in others.)

He said that for the average subscriber, the “20 Mbps speeds are perfectly sufficient, but as more people work from home, we see business needs enter into the residential space and I’m firmly confident we have the technology to keep up with that.”

Sturdy Thomas, a Dublin resident who is on that town’s broadband committee, lives a half mile from a DSLAM and still is dissatisfied with his service after the upgrade. 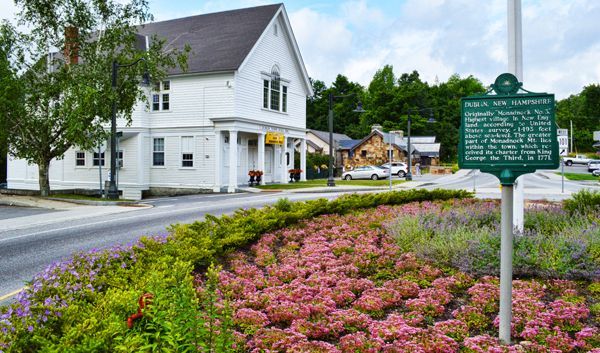 Dublin will soon release an RFP, seeking to build out high-speed internet coverage.

His wife works as a graphic designer out of their house.

“We do have frequent service drops [with DSL]. If she’s in the process of sending or receiving material, it really impacts her,” said Thomas. “The other thing is we have a slower upload speed. They say we get 3 [Mbps]. I’ve never seen 3. I’ve seen 1.9; it’s more like 1 and a quarter, 1 and a half, which makes for very slow uploads when you have images.”

Carole Monroe, a Dublin resident and broadband consultant, argued providers would have to use “a heck of a lot” of DSLAMs to make high-speed internet universal, adding that “the problem with DSL is it degrades the further you get from the equipment.”

Dublin will soon release an RFP for a partnership that builds out fiber because it allows communities to prepare for the faster speeds they’ll likely need, said Monroe.

Despite the funding challenges, it’s imperative rural towns take action, or else face the prospect of dwindling tax dollars, said Miller. “People do not buy homes that do not have broadband today. They just don’t.”

Before SB 170 passed, Bristol Town Manager Nik Coates was encouraged by Miller to apply for a $132,000 Northern Border Region Commission grant that the town received after taxpayers authorized a $98,500 match. 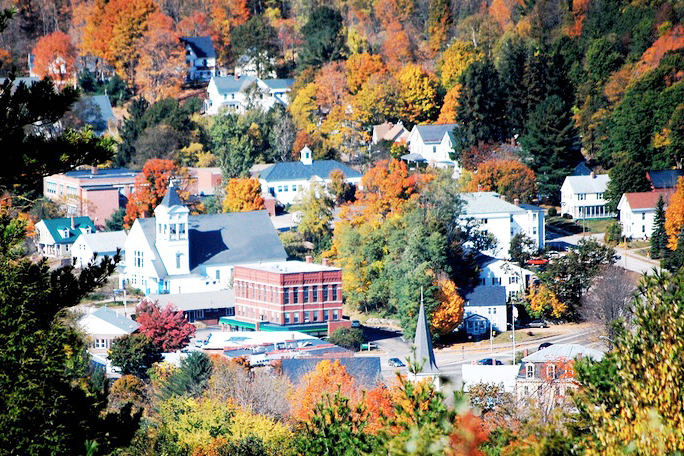 Bristol is using a Northern Border Regional Commission grant to buildout fiber through its downtown.

The funds will help build out a three-mile fiber network connecting municipal buildings through Bristol’s business district and downtown and enable phone calls over Wi-Fi.

“Bristol’s interest in a municipal fiber network is not because homes and businesses in Bristol lack access to broadband internet and fiber services—most already have this access today through Atlantic Broadband,” said spokesperson Andrew Walton, who noted Atlantic Broadband’s fiber footprint covers Bristol with speeds up to 1 gigabit per second and direct fiber services for businesses with speeds up to 10 Gbps.

The overlay of an additional fiber network in Bristol “seems unnecessary and would likely burden taxpayers … given what is already available through Atlantic Broadband’s network and services,” said Walton.

“We were upfront with Atlantic Broadband as we figured out what we could do with this fiber project,” said Coates, who is looking to “control costs for our residents and provide better opportunities for speeds.”

Coates said the move is meant to encourage economic development, since the target area is also an Economic Revitalization Zone, part of a state program that offers short-term business tax credits for projects that improve infrastructure and create jobs.

Potential future federal grants or partnerships supported by SB 170 could also help expand fiber coverage, especially as Bristol looks to take advantage of a taxpayer-approved $20 million sewage line replacement in coming years that could be the perfect time to lay fiber, said Coates.

But federal assistance only goes so far, and there are limitations, said Hanover Town Manager Julia Griffin, who has long worked on the broadband access issue.

Although 40% of its population does not have access to broadband, Hanover is ineligible for Community Development Block Grants due to median income limits, an issue facing several New Hampshire communities, she said. And U.S. Department of Agriculture ReConnect grants are only available to communities at or below the threshold of 10 Mbps download and 1 Mbps upload. USDA argues this controls the number of applications and narrows in on the most rural areas, and that it can reevaluate the speed threshold after the first round of ReConnect funding.

Meanwhile, the FCC is still relying on flawed broadband mapping, which depends on providers to submit information at the census block level, rather than by address location, as New Hampshire legislated last year.

“I can tell you, there are lots of areas in New Hampshire and Vermont that the FCC says is fully served and in fact there’s one location in that area that has service at that level and everybody else has DSL at 41 [Mbps] or less than 10/1,” said Monroe.

“From my experience driving extensively around our state, I know that the FCC’s maps do not accurately reflect where New Hampshire lacks broadband coverage,” said U.S. Sen. Maggie Hassan, D-NH, who has co-sponsored legislation regarding the FCC’s mapping process. “Given that these flawed maps help determine where billions of dollars in federal funding to expand rural broadband are spent, this is a huge problem.”

The FCC will vote in August on whether providers should report service offered below the census block level, as it prepares to dole out more than $20 billion in telecom subsidies over the next decade.

From 2010 to 2017, New Hampshire received $110.450 million in federal grants toward broadband infrastructure, according to the NH Department of Business and Economic Affairs.

But federal efforts fall short without a state-led vision as well as financial support, argued Griffin.

Both Griffin and Monroe saw the result of the state’s inability to fully financially support projects despite federal stimulus funds for the NH FastRoads project, a 161-mile fiber middle mile built from Rindge to Orford, with 86 miles of last-mile connections, starting in 2010.

“Where most states came up with match funding, FastRoads had to come up with 30% of match funding, which was a struggle for a startup company and meant they had debt that other networks didn’t have in other states,” said Monroe. “All of that money that went back to those loans could have been used to build up the network.”

And lack of state funding, with municipal bonding then not allowed, hindered towns’ ability to get last-mile connections. The result: Last-mile connections were only completed in Orford and Rindge because the towns met average income requirements, said Griffin, who worked on FastRoads.

“We had communities that were standing waiting, trying to figure out how to tap into that middle mile, but because they couldn’t get anywhere with legislation to bond for broadband, we couldn’t continue the operation of the network, so we had to sell it,” said Griffin.

In 2016, within approximately two years of completion, FastRoads was sold to NH Optical Systems Inc., eventually acquired by FirstLight, a large regional fiber bandwidth infrastructure provider. Much of the fiber owned by FirstLight is currently unused, with portions leased to businesses and other internet service providers, said Griffin.

Monroe, who previously served as CEO of ValleyNet before retiring, is now a consultant for the town of Lyme, NH, which is partnering with ValleyNet after a group of private philanthropists formed LymeFiber LLC to fund broadband buildout in the town.

The dichotomy reveals the difference in New Hampshire and Vermont’s approaches and attitudes toward state government’s role in regard to broadband buildout.

But the unlikelihood of New Hampshire funding broadband efforts is the reason SB 170 finally passed to begin with, with the cooperation of industry officials.

“The point of this legislation is if we wait for state and federal government funding, we won’t make progress in rural communities,” Sen. Jay Kahn, D-Keene, the sponsor of SB 170 told NH Business Review last year.

Now SB 103 is awaiting the governor’s signature. The bill would authorize municipalities to engage in multi-town bonding projects, adding leverage to municipalities’ ability to bond for broadband, suggesting a collective approach is the best way to get things accomplished.