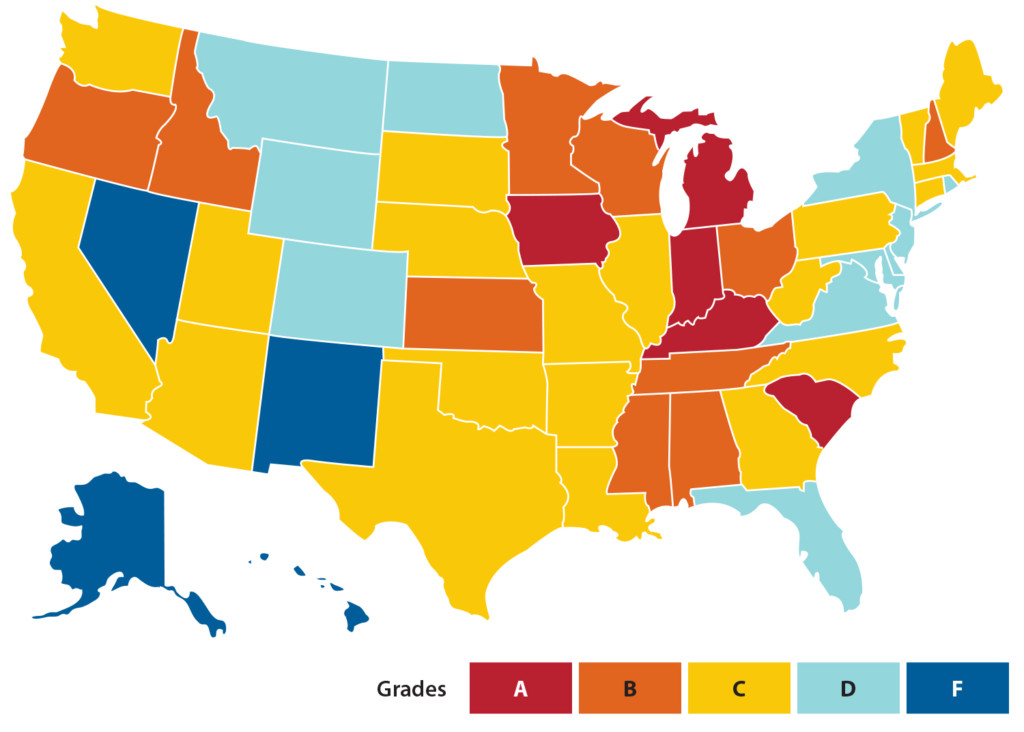 In an annual comparison study of all 50 states, New Hampshire held steady with a B in manufacturing sector health as well as seeing improvement in several categories.

Ironically, the only category where the state slipped was its tax climate — a topic of much debate lately, as the Legislature and governor disagree whether tax cuts passed in a previous session should continue or not. New Hampshire fell from a C to a C- in that category.

“There’s an awful lot of tax competition out there, and you as a particular state could be in a static condition and see a bit of slip, but I would caution against worrying about that,” said Michael Hicks, director of the Center for Business and Economic Research at Ball State University in Indiana, which conducts the annual report.

“If you have really robust public services then you want to be cautious about reducing taxes because businesses making investments in manufacturing — which is mostly expansion not moving into a new state — they’re going to think about the long-term future of the state’s fiscal environment, and its human capital need is more important than it was in the past,” he said.

The demographic of the average manufacturer employee is changing. By 2007, more than half of manufacturing professionals had been to college with most attaining two or three years with an associate’s degree.

“States with higher graduation rates — those areas are going to be where manufacturers locate in the years to come … If you pull money away from schools and highways and water and sewer systems, it’s not as profitable for manufacturers to stay there,” said Hicks. “When you’re a state with a top manufacturing ranking like New Hampshire does, I would loathe to recommend policy changes in those areas.”

One policy change Hicks would recommend is in regard to logistics, as New Hampshire depends mainly on its seaport and is not central to the national manufacturing transportation network, which is why the state continues to receive a failing grade.

However, New Hampshire experienced slight boosts in several categories, including a D+ to C- in worker benefit costs (as healthcare costs and worker’s comp insurance fair well in the state, or at least in comparison), a D+ to C- in sector diversification and B to B+ in productivity and innovation.

“If you look at New Hampshire, you’re not a huge state, but you have fabricated metals and computer and electronics manufacturing — those typically don’t go together, right?” said Hicks, pointing out legacy manufacturing co-mingling with the high-tech. “So if you’re building computers and drug manufacturing and high-end stuff, which makes sense given the R&D score, that makes your manufacturing sector more stable during a recession, which could be coming.”

“Massachusetts and Connecticut struggle because the costs of manufacturing in a large, urban place are so high it starts to be a tedious thing for manufacturing to be sustainable there,” said Hicks. “I talked to a reporter in Connecticut and that’s just not going to be the future of Connecticut. In Massachusetts, manufacturing is going to move away from the coasts, where it’s been for a long time, and that means New Hampshire will do better in terms of production.”

However, Hicks cautioned, “There’s no reason to believe manufacturing employment is going to be a big employment force in the future. It’s going to continue to shrink, especially as we see productivity gains eroding jobs but improving output.”

That’s not just robotics and automation, but an uptick in the ongoing shift to digitalization, as manufacturers rely on computers and sensors to detect mistakes early in the production process.

A potential lasting impact of the recession is that manufacturers have waited to make capital investments or made piecemeal changes over time, said Hicks. As manufacturers gain high-skilled workers comfortable with technology, and decade-old machines reach their end of use, there could be significant technological advancements made on the factory floor.

“Automation is the catch phrase for all of this productivity growth that has stalled, which is why employment is growing, but you know it’s coming,” said Hicks

Correction: An earlier version of this story incorrectly stated New Hampshire received a B+ for manufacturing industry health. It received a B.