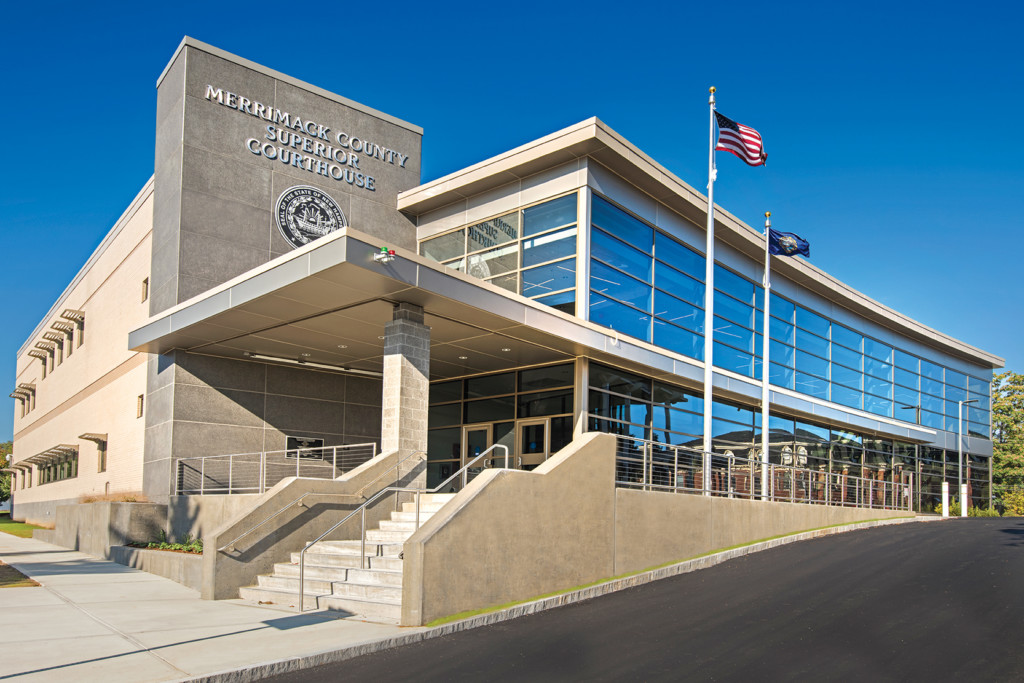 It took several years of negotiations and then slightly more than a year of construction, but court is now in session at the new Merrimack County Superior Courthouse.

The unique public-private partnership was initially headed by developer Steve Duprey until the baton was passed to construction managers Milestone Engineering and Construction, of Concord, and the process of creating what would become a new, gleaming glass and brick structure with a signature Cambrian black granite tower began.

“There were a number of things we needed to do initially,” Milestone Project Manager/Superintendent Matt Beaulieu says. “We needed to tear down the old Registry of Deeds building on North Main Street, which was built in the 1960s. We had to move people out, and that started in the late summer of 2017.”

The new building sits just behind the old courthouse, and necessitated some site preparation in order to keep things moving smoothly throughout the process.

“Part of the challenge is that Concord has a bit of a parking issue,” Beaulieu says. “We needed to be able to give people working at the old courthouse somewhere to park — especially during jury selection days. So we tore the old Registry of Deeds down and created the parking lot you now see in front of the old courthouse. We had to do that hand-in-hand with the actual foundation excavation for the new courthouse.”

As construction progressed, Milestone addressed a secondary challenge that required treating the steel frame with cementitious fireproofing — a spray-on process that requires specific conditions to be effective.

“Once the steel was up, we started that process,” Beaulieu says. “We had to wrap the building in poly — and it was a particularly windy winter — and then spray-on the fireproofing. We had to maintain a building temperature of 40 degrees and rising for the cementitious fireproofing to not freeze and fall off the steel. It was a pretty challenging part of the project that threw a little wrench into the scheduling, because we were wrapping a building in December and January and keeping it heated.”

Additionally, because the site was just 25 feet from the existing courthouse, where business was conducted daily, project managers needed to keep construction noise and interruptions to a minimum.

“We erected a 14-foot wall made of chain link fence that we draped sound-deadening blankets on to help deflect some of the sound,” Beaulieu says. “We also retrofitted the existing courthouse windows with poly panels that deadened the sound a bit as well. We were keeping as much noise as possible out of the existing courthouse.”

There were times, during high-profile court cases or when there were large groups of people, that construction was temporarily halted. That time was made up during court breaks, before proceedings and after proceedings.

“It was off and on,” Beaulieu says. “Nothing was really disrupted for any length of time. It was a bit of a delicate balancing act, but we worked around these things.”

Thanks to the expertise of the team in dealing with various challenges that occur during any construction project, it was mission accomplished by October of 2018. The new 35,000-square-foot courthouse, which opened in the fall, is a modern structure with a variety of upgrades and amenities that didn’t exist when the previous facility was built. A two-story, contemporary style structure, it features a glass curtain wall in the front that floods the space with natural light and allows anyone inside to look out to the east-facing portion of the city — and onto the old courthouse. Several elevators and staircases lead to the second floor, and since it is a courthouse, a number of detention areas are located in the core of the building and close to the three courtrooms.

“It was interesting to see how the architects worked to include security elements,” Beaulieu says. “The whole thing was unique — especially the thought that went into the way the corridors were laid out and the security in certain areas.”

Step inside and a large, airy lobby greets you. A security desk leads to a large staircase directing you to the main lobby on the second floor, which runs the length of the building. Juror assembly rooms, a number of conference offices and a clerk’s area are also a part of the new building.

In the end, the negotiations on where to locate the facility took longer than it did to complete the newly opened courthouse. The team, which included Milestone President Frank H. Lemay and General Superintendent David Baer, among others, saw the process through budgeting to opening the doors of the new courthouse a little more than a year after breaking ground.

“The whole project was very fast-paced,” Beaulieu says. “It seems like it went by in the blink of an eye. There wasn’t a lot of downtime. And a lot of it came back to Steve Duprey — he was very involved in the project throughout, and he was the inspiration behind the project, I believe.”