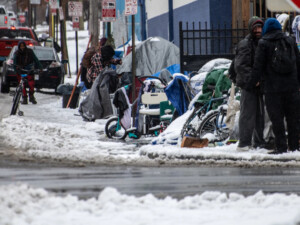 Manchester officials met with local business owners and other community members Monday to talk about responses to the city’s homelessness crisis.

Several people who are currently unsheltered also attended the meeting. Some called for more shelter options, while others expressed concerns about what they described as an overly restrictive environment in existing shelters. They also called for more understanding from people about the challenges they’re facing in accessing housing or other resources.

Among those representing the city at the meeting were Adrienne Beloin, director of homelessness initiatives, and Andrew Warner, who is leading the city’s response to preventing drug-involved overdoses and fatalities.

The meeting came on the heels of an announcement that the city plans to clear a downtown encampment by Jan. 17. The encampment is located around the Families in Transition shelter, which city officials say is currently at total capacity.

According to Beloin, the city plans to vacate about 45 tents from the encampment, which has been growing since winter started. She said the city is trying to connect those affected with social services, such as housing assistance and addiction treatment. However, she said can be difficult for some people to access or accept those services.

“The city faces a homelessness crisis, and the problem is the lack of shelter models of low barriers for people to access,” Beloin said.

Anticipating the evacuation, Manchester officials opened an additional temporary warming station last week at the William Cashin Senior Activity Center, located on the city’s West Side. Beloin said the center has 40 beds that could help provide a warm place to stay. It’s not clear how many people are currently without a home in Manchester; the most recent report from the New Hampshire Coalition to End Homelessness found 362 unsheltered people living in the city in 2021.

At Monday’s meeting, some people said they are hesitant to go to a shelter because they feel less free in that environment. One person said the restrictive hours of entry at the Cashin Center and other factors could create additional problems.

“It is something about that building, that side of town, could be a trigger for somebody,” they told the group at Monday’s meeting. “We need more options.”

Another person who said they were currently unsheltered talked about the need for public bathrooms, which the business owners have also complained about frequently.

“I feel for them [the business owners],” he said. “But I also feel for the homeless, who are considered second-class citizens who can’t even use the bathroom.”

He also said the lack of affordable housing in the city makes it impossible for people to have hope for a better future.

“There are no low-income beds, and people have been on the waitlist for years,” he said. “I am sick of the discrimination and barriers to access; I am just sick.”

Several recent incidents have highlighted the severity of the homelessness crisis. Two unhoused people died in a single week, and a baby was hospitalized after being born outside in frigid weather. Last year, local advocates counted 31 people without a home who lost their lives in Manchester for reasons related to accidents or chronic illness.

The upcoming encampment closure has also raised concerns among local business owners. Some said they fear the potential for an increase in homelessness on other streets, citing insufficient alternative places for people to go.

Jerry Dupont, who owns an apartment complex downtown, expressed uneasiness about the decreased foot traffic for both her business and others. She also said she was concerned about the need to hire people to patrol to pick up needles and clean human waste. She said Monday’s meeting was a great start and hopes the unsheltered community receives dignified resources. She called on the city to find a solution to the problem that considers the needs of both the homeless population and the business community.

“The mayor needs to listen hard and help us do something,” she said. “They need help to rebuild their lives.”

Marc Choate, a local pastor who works with the unsheltered population, called for more of a focus on addressing a shortage of affordable housing. He hopes business owners also contribute and volunteer to help people on the streets.

“Unless there is a clear vision from the city, all we are doing is brainstorm and no solution,” he said.

Some people who attended the meeting also asked for needle receptacles and public bathrooms. Beloin assured the group that the city would take steps to address the issue, and she called on business owners to be more tolerant and participative.

“People can come up with ideas to share and think in new ways to collaborate and support this population,” she said.

In response, one person in the crowd replied: “Let [the unsheltered people] say what they need and what they can do; we don’t know what is best.”