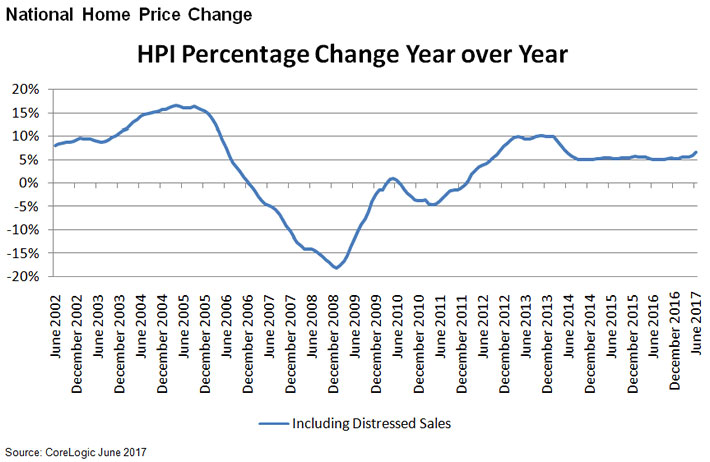 National home prices are almost 50 percent higher than March 2011, when the housing market bottomed out, according to the real estate data analytics firm CoreLogic.

Home prices nationally increased by 6.7 percent from June 2016 to June 2017, and on a month-over-month basis, home prices increased by 1.1 percent in June 2017 compared with May 2017, according to the CoreLogic Home Price Index.

“The growth in sales is slowing down, and this is not due to lack of affordability, but rather a lack of inventory,” said Dr. Frank Nothaft, chief economist for CoreLogic. “As of Q2 2017, the unsold inventory as a share of all households is 1.9 percent, which is the lowest Q2 reading in over 30 years.”

“Home prices are marching ever higher, up almost 50 percent since the trough in March 2011. With no end to the escalation in sight, affordability is rapidly deteriorating nationally and especially in some key markets such as Denver, Houston, Miami and Washington,” said Frank Martell, president and CEO of CoreLogic. “While low mortgage rates are keeping the market affordable from a monthly payment perspective, affordability will likely become a much bigger challenge in the years ahead until the industry resolves the housing supply challenge.”