Company veterans have a big impact on city’s economy 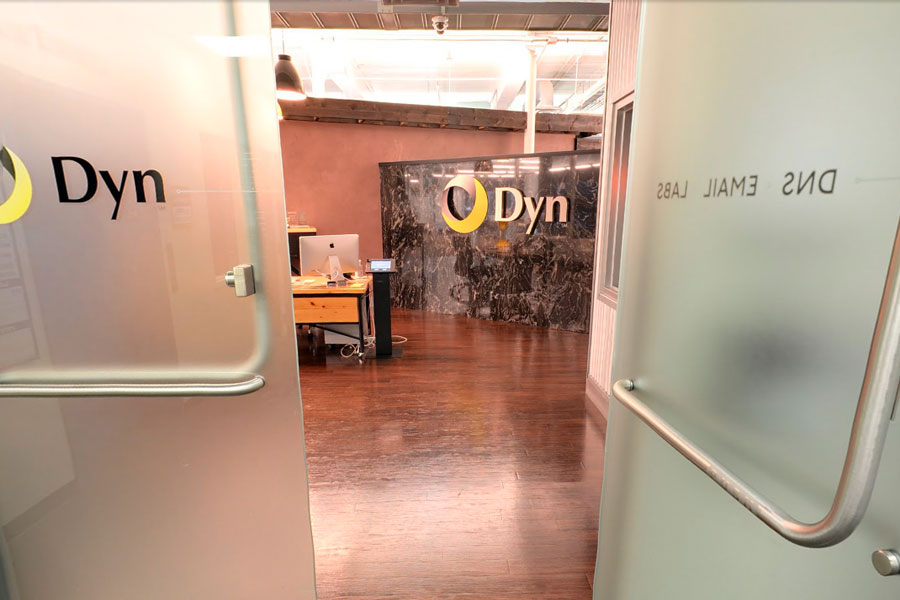 In the early 2000s, when Jeremy Hitchcock and Tom Daly, two of Dyn’s four founders, moved the company from Worcester Polytechnic Institute in Massachusetts to Manchester, locating in New Hampshire was seen by some as a major obstacle to growing a technology company.

“Jeremy and I had a really interesting meeting with an advisor to Dyn one day, early on,” Daly recalls. “It was somebody from the VC community in New Hampshire, and we gave this person the pitch on Dyn. We weren’t trying to raise money at the time; we just wanted to make sure we knew people in the community, and this was someone who came back to New Hampshire after serving as an executive in Silicon Valley. After our pitch, he said, ‘I can’t believe this is in New Hampshire. You’re going to die here. I’m surprised you’re not dead already.’”

That type of response motivated Dyn’s executive team. As Daly says, “No one likes being told there’s something you can’t do.”

Growing from a dozen employees to approximately 400 in the Manchester Millyard, Dyn came to be known as a cheerleader for Manchester’s growing technology hub and a prime example of how the internet enabled a global company to operate from a secondary market. In 2016, Dyn was acquired by Oracle Corporation for $600 million.

“Dyn as a company introduced a lot of people to Manchester and New Hampshire that otherwise might not have ended up here,” said Mike Skelton, CEO of the Greater Manchester Chamber of Commerce. “We’ve always had an aspect of our business community that has been grounded in technology and innovation startups, but Dyn really added some energy and talent to that ecosystem that brought it to an entirely different level.”

Building an employee base

Dyn was notable for its fun culture that attracted a younger workforce to an aging state north of Boston.

There was a ping-pong table, beer kegs, a whiskey room and a rock climbing wall, to name a few amenities. The company organized networking events, called DynTinis, which brought employees and the community together for drinks.

“I had worked locally in Manchester at a public accounting firm so I had kind of heard about Dyn as being the cool place in town. They would run in the Cigna race, so it had that vibe as an energetic, young company,” said Gorman, who worked at the company for six years. “I think what made it cool was the people. There was just a ton of energy in that space, people have passion toward what they were working on, even in the finance department.” 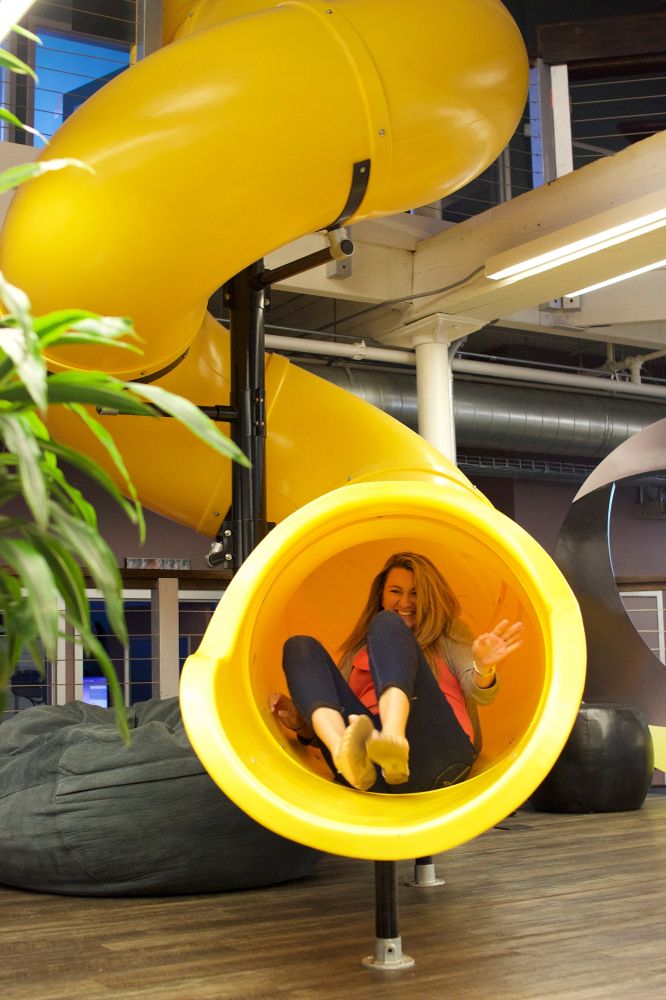 Dyn embodied a culture of supporting the local community by hosting New Hampshire Tech Alliance events, among others. Employees and executives served on the boards of Stay Work Play, the Boys and Girls Club, Catholic Charities New Hampshire, Alpha Loft and the Manchester Community Music School.

“When you think about what Dyn did, the domain name system, people aren’t just clamoring to go work on back-end internet infrastructure,” said Adam Coughlin, who served as Dyn’s director of communications. “It was Dyn’s commitment to the community and to the culture of its employees — that’s what attracted it to me. That’s probably true for a lot of people.”

That mentality drives Jeremy Hitchcock and his wife Liz to continue to pursue a number of community projects, including opening The Bookery, a downtown Manchester bookshop and café; taking a role in helping The Palace Theatre reopen The Rex Theatre this fall; and working with former Dyn global facilities director Amy Chhom to turn a former shoe factory at 252 Willow St. into 60 combination apartment/studio spaces for artists and entrepreneurs in 2021.

“Arts and culture is really what builds a workforce, and we want to continue to build amazing workforces right here in Manchester,” said Liz Hitchcock.

It was a combination of Dyn’s workforce and technology that made it valuable, said investor Matt Rightmire.

Dyn signed contracts with Amazon, Twitter, Netflix and other enterprise customers, using 17 datacenters around the world to direct consumers to the fastest possible route to get to their websites.

“Dyn was not peculiar in that they developed, I’d call it, a technology-enabled service that was especially valuable as the cloud developed around them, and they had a set of customers and a set of capabilities and access to the market that we believed some bigger player was likely to want and to benefit from pretty dramatically,” said Rightmire. “And the Dyn team is one of the best in the world in their particular domain, that’s why a company like Oracle would ultimately pursue them.”

But after Oracle purchased the company in late 2016 for a reported $600 million, it has endured three rounds of layoffs, and the space at 150 Dow St. in the Millyard has been advertised by Colliers International as available to lease.

That’s “unfortunately the nature of the tech business,” said Rightmire. “Over the course of the two years since the acquisition — Oracle is a 130,000-people company — their business has changed and evolved and their focus has reoriented and, as that has happened, they put less value on what was a great team. Dyn got assumed by other business interests as this bigger company [adjusted] to its other business markets.”

Oracle declined to comment on the number of employees still working in the Manchester Millyard or generally in New Hampshire. Speaking to former Dyn employees, their guess ranged from 30 to 150 employees in the Millyard.

“We would prefer to retain every employer we can, but sometimes that’s not possible based on business decisions or factors outside of our control, particularly if it’s a larger company with a national or international footprint and lots of other sites,” said Skelton.

However, he pointed out, “people who worked at Dyn, were successful at Dyn, remain in the community and their impact will go on for a long period of time.”

Ashley Oberg, an executive assistant at Oracle, started her own Barre studio, attended by fellow Dyners.

“The entrepreneurialism that came out of Dyn is strong in many facets beyond just technology,” said Amy Chhom, who has founded her own real estate company in addition to working with the Hitchcocks on community projects.

“There are 400 people in and around Manchester whose formative tech experience was formed at Dyn, and they contributed to a company that was an emerging segment of the tech industry,” said Rightmire. “They’ve been through that life cycle. That is huge for Manchester and the technology community, because they’re going to start new things — they already are — and they’ll start with a basis of knowledge that is really valuable. That’s an experience very few, even in Silicon Valley, can claim.”

That experience has led Dyn’s executive team to offer their expertise as well as financial backing to startups in New Hampshire and beyond.

“A lot of people don’t know what they’re investing in, so it’s more spray-and-pray mentality,” said Raczka. “We’re going to bring to the table an extension of a management team, and really raise that likelihood of success.”

Over the past five years, as individual angel investors, the trio has invested in 60 companies, deploying more than $12 million from themselves and other backers. The result has been 15 exits, one company going public and 40 active businesses, of which approximately 10 are based in New Hampshire.

“We’re going to be tremendously biased toward New England companies, New Hampshire companies, because part of the value-add of being smart money, not just capital, is to be helpful, and that is a heck of a lot easier when you can be face to face,” said York.

Among the companies they currently invest in is Datanomix, a manufacturing analytics platform based out of Nashua, which won the TechOut startup competition in 2017 and also raised an angel round of funding in early 2018 from a number of former Dyn executives.

“They [Dyn alumni] actually started several programs around fostering startups,” said  Greg McHale, founder and chief technology officer of Datanomix. “They angel-invest with their own money, they advise, they sit on boards, they help when you ask for help — they’re really, really committed to New Hampshire as an ecosystem.”

This November, there will be a $300,000 round of funding available to the winners of TechOut, a live-pitch event organized by the Tech Alliance and Mill Works Fund II, a partnership of New Hampshire investors, including Dyners Gray Chynoweth and Liz Hitchcock as well as the New Hampshire Business Finance Authority.

The value of close mentorship is not one to be overstated. As Corey von Wallenstein, former Dyn CTO and an angel investor, said about Mill Works Fund II — in which he also participates — “You’d have to accept a lot of capital to get high-quality advice [elsewhere]. It’s about one-to-one impactful guidance, encouragement, mentorship and helping that next generation take that next step. That’s really unique here. I don’t see that in Boston and San Francisco.”

Correction: The print version of this article incorrectly stated Kyle York, Adam Coughlin and Joe Raczka had invested in 60 startups over 10 years. It was in fact, five years.