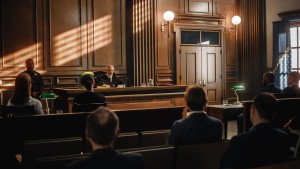 A South Berwick, Maine, resident is facing felony charges after he threatened to attack a judge overseeing a long-running divorce case.

Prosecutors allege Christopher Butler, 36, made the threat to a court employee on a recorded phone line earlier this month. Butler was allegedly upset with the judge’s decision to reaffirm a $50- per-month child support payment. According to a transcript of the March 16 call included in court records, Butler twice threatened to stab the judge, once using a pencil, and then again using a ceramic knife, which he said could get past court security.

During the call, the court employee explained to Butler that he had the legal right to file a motion requesting the judge reconsider the order. Within minutes, he arrived at the courthouse where, flanked by security guards, he filed the document.

On March 17, the day after allegedly making the threat, Butler was interviewed by an officer with the Rochester police, where he allegedly stated that he felt the judicial system wasn’t hearing his concerns.

“I feel like I’m being f___ed by the system,” Butler allegedly told investigators.

Butler and his former partner have been involved in a divorce proceeding for nine years, during which time multiple judicial personnel have overseen the case.

In his recorded call, Butler told court personnel he’s suffering from a terminal condition, and doesn’t have the money to cover child support.