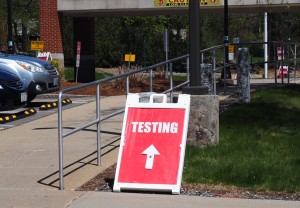 But that program will become unaffordable unless Congress agrees on another round of pandemic response funding. “The costs are massive. This could be enough to bankrupt facilities,” said Bower, who estimates the 5,000 tests used weekly could cost $250,000 a year. “If the cost of testing was not offset (with federal money), if the county had to pay for itself … it could be disastrous.”

The Biden administration has sounded alarm bells about the risk of inaction after sending Congress a request for $22.5 billion in early March for tests, treatments and vaccines. But U.S. lawmakers have been unable to pass two bipartisan agreements, and no negotiations are underway, even as cases increase nationwide and the potential remains for a big wave of infections this winter.

“I think for a certain number of people in Congress, even though people keep dying from Covid … they choose not to or don’t accept the continued seriousness of Covid and the fact that it seems to get worse in colder months,” Bower said. “To ignore the need now for vaccines that could prevent tragedies in coming months is really shortsighted.”

But New Hampshire officials are already preparing for a future in which the federal support is gone.

In a statement Monday, a spokesman for Gov. Chris Sununu said the state has set aside $50 million in Covid-19 relief money as an emergency reserve for the coming fall and winter “should it be necessary.”

But the spokesman, Ben Vihstadt, said the state had “long maintained” that the distribution of vaccines should transition to primary care physician offices, not state or local governments. He did not comment specifically on the funding for antivirals.

“Testing remains widely available across the country and in New Hampshire, and the lack of action from Congress will not change that fact,” Vihstadt said.

It is unclear where the money for those vaccines or tests would come from if congressional funding falls through.

Department of Health and Human Services spokesman Jake Leon referred questions about future funding for the pandemic response to Vihstadt. He did not respond to a question about how much federal money the department has spent on vaccines, testing and treatment or say how much of that money remained.

In April, a program that provided uninsured people free Covid-19 vaccines ended. Leon noted another federal program provides some people testing and treatment while the public health emergency is in effect.

“New Hampshire is one of about 15 states that adopted the program, which fully covers the cost of vaccination, testing and treatment of Covid-19 for any person who otherwise does not have insurance coverage,” he said. As of the end of May, 9,500 people had enrolled, he said.

The congressional funding impasse comes after hospitals and other healthcare providers already saw an end to millions of dollars in relief funding that helped with skyrocketing staffing costs of recruiting and retaining workers and bringing in more costly traveling nurses.

“We’re very concerned about the lack of progress on this latest Covid relief bill and the real implications for us if we don’t have additional funding for testing, vaccines, and treatment,” said Steve Ahnen, president of the New Hampshire Hospital Association. “The most concerning thing is what’s not included in those packages: more for the provider relief fund.”

As of Saturday, 84 patients were being treated for Covid-19 or were recovering but still required hospitalization, the association’s Covid-19 dashboard reported. While that number is considerably lower than earlier peaks, hospitals remain busy caring for not only Covid-19 cases but other patients who are arriving with more acute illness because they put off care.

That care, Ahnen said, is costly at a time when hospitals are already strapped and understaffed.

“We will need additional resources to get us through this next phase,” he said. “Think about what we’ve seen over the last two years. We see an increase in the winter, spring and summer numbers go down, and in the fall they spike. If we don’t have the testing, vaccine and treatment to prevent that from happening again or managing that surge, we are very concerned about what that means in terms of our ability to respond to make sure every patient gets the care they need.”

In Strafford County, that federal money has allowed the nursing home to test its approximately 340 staff members at least weekly and twice weekly if they received a vaccine exemption, keeping in line with federal Medicaid and Medicare rules. When a staff member tests positive, the nursing home tests every resident that person spent time with, Bower said.

“We’re not going to run out of what the state has provided us for free tomorrow,” Bower said. “But if you look down the road any distance, it really wouldn’t take that long once we stop getting those tests to really have a problem.”

“Senator Hassan has heard from Granite Staters about the need for additional legislation to address Covid-19 testing, vaccine, and treatment needs so that our country can keep moving forward, not backwards – and she continues to advocate for this in the Senate,” spokeswoman Laura Epstein said in an email.

“Congress took historic, bipartisan action to provide funding for healthcare providers, frontline workers, schools, and public safety and first responders, and many of those funds have yet to be exhausted,” Gately said in an email. “Congressman Pappas will continue to listen to voices on the ground and work in Congress to meet the needs of our communities and ensure the health and well-being of all Granite Staters.”