As warmer days approach, tourism industry wonders when life will return to normal 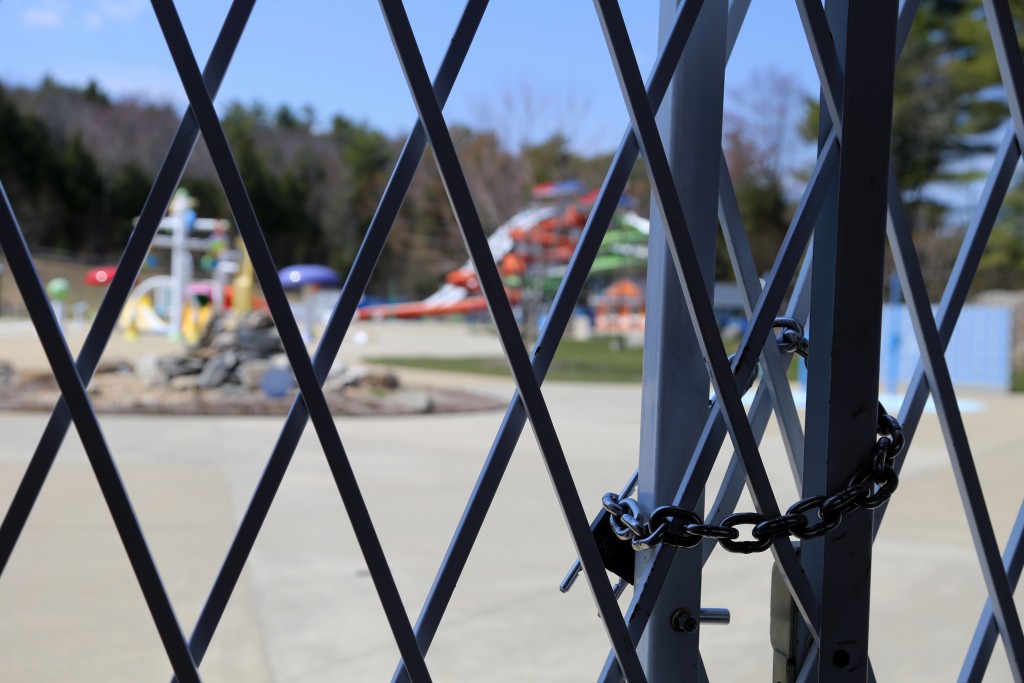 Editor’s note: A previous version of this article reported that Lakes Region marinas have not yet opened. In fact, they are open and operating, according to Julie Marsh, executive director of Winnisquam Marine and the New Hampshire Marine Trades Association.

“I’ve never seen so much traffic down there. It was almost like the summer,” Roche, president of Roche Realty Group, recalled. “There were tons of surfers out there in their wetsuits and tons of people on the sidewalks, and the next day they had it all taped off.”

Nearly a month after New Hampshire and most states implemented stay-at-home orders, Roche expects there will be “a lot of pent-up demand” from locals and tourists alike wanting to get out of their house and enjoy the beautiful weather after those orders expire.

As much as everyone wants the Covid-19 crisis to pass, the reality is that Memorial Day weekend — the iconic kickoff to the summer season — remains very much in limbo. The U.S.-Canadian border remains closed to nonessential travel, cutting off Canadian tourists, a key contributor to New Hampshire’s economy.

“I think these next three weeks are really going to give us a good perspective on what the summer season is going to look like,” said Charyl Reardon, president of White Mountains Attractions, a 60-year-old marketing organization for hospitality and entertainment businesses in the North Country. “I think there’s encouragement for folks to stay home, follow these orders so we can get over this hump and start to flatten the curve.”

Reardon, association members and the state’s Division of Travel and Tourism will be awaiting further advice from the Centers for Disease Control and Gov. Chris Sununu when businesses can prepare to reopen.

The Division of Travel and Tourism will not predict when the tourism season will begin.

“I think nobody knows,” said Mike Somers, president and CEO of the New Hampshire Lodging and Restaurant Association. “Optimistically, we’d love to start opening up May 4 [the tentative deadline for the governor’s reopening for nonessential businesses], but realistically it’s going to be longer than that.”

In the meantime, businesses are in a “holding pattern,” said Somers.

“A lot of folks are keeping on skeleton crews to do some periodic maintenance or deep-clean or cursory remodels. Those things are certainly happening, but that’s not sustainable,” said Somers, whose members were hit hard after the governor ordered the end of dining in at restaurants on March 16 and then greatly restricted hotels and other lodging establishments on April 6 by eliminating all “non-essential” accommodations.

“People are legitimately trying to figure out how they are going to be one of the ones that survives, however that’s packaged together — cobbled together with loans, hopefully some forgiveness in there for the sheer economic impact,” said Somers of the federal CARES Act, which offers forgivable loans and other assistance to small businesses.

Among the restaurant owners taking advantage of the legislation was Tom Boucher, CEO of Bedford-based Great NH Restaurants, who applied on April 3 for 10 loans through the federal Paycheck Protection Program. He received the funding, millions of dollars worth, on April 13.

“We borrowed enough to cover all of our payroll for eight weeks, so we’re hiring back all of our full-time employees, which is an additional 250 people,” he said.

Another 350 part-time employees have been laid off, but Boucher can’t use the funds to pay them.

The loan will be forgiven if the money is used in eight weeks, which is the one qualm Boucher shared with U.S. Sen. Jeanne Shaheen in an industry-wide conference call. Shaheen is among the senators working to extend the deadline to 10 or 12 weeks.

“It’s been an incredible time for us to manage our business, and it’s very challenging for us because we’re so used to having historical data to plan and predict what we’re going to do for everything,” said Boucher. “We’re like a fish out of water right now, reacting almost daily.”

And once dining-in does resume, he said, “my guess is we’ll be down 25% for a month and it’s going to be a slow, long climb back,” he said.

“There’s a certain amount of capital you need to start again,” said Somers. Businesses need time to prepare their food and beverage  inventory and rehire their staff for opening day, he added. And then there’s the unknown factor: “What is the appetite going to be of customers to come and support those hotels and restaurants?” he said.

As for summer rentals, “there hasn’t been a downtick or uptick in cancellations,” said Alex Loiseau, owner of Harris Real Estate, a Hampton-based company that helps second homeowners rent out their homes during peak season, which is July and August.

A lot of owners will use their properties in May, June and September, he said, but, with the beaches closed, owners are staying put where they winter. Typically they would be coming up to turn over their cottages.

At this point, seasonal businesses, like theme parks, would have been preparing to open for Memorial Day by hiring staff and performing cleaning and necessary maintenance, said Reardon.

But, this year, attractions like Water Country in Portsmouth and Story Land in Glen have put notices on their websites to stay tuned for opening day in light of the Covid-19 crisis. Water Country even closed its administrative office as of March 23.

Santa’s Village in Jefferson has slated May 23 as its opening date. The theme park recently completed its new Polar Paradise interactive water play for the 2020 season. And Laconia Motorcycle Week — which annually attracts hundreds of thousands of bikers to the Lakes Region — may be rescheduled from June to August.

Because of this, White Mountains Attractions and the Division of Travel and Tourism are not spending any marketing dollars at the moment.

“We run a very minimal campaign during the winter and the spring, so we ceased everything probably the first part of March, right around the time the governor made his first announcement,” said Reardon. “Right now, we’re really focused on using non-paid organic social media to reach followers and keep visitors that are fans of us inspired, so when people are ready and prepared to travel again, they know we’ll be ready to welcome them.”

As part of that inspiration, she said, the association is using the tagline, “Dream Now, Adventure Later,” as are other tourism groups around the country.

“These are unprecedented times,” said Lori Harnois, director of Travel and Tourism. “New Hampshire is participating in conference calls on a very regular basis, not only with other New England states, but also with states around the country. We are working to support each other as we try to navigate these uncharted waters.”

Tourism is New Hampshire’s second-largest industry, with summer, fall and winter more popular seasons for visitors than spring, but there are missed opportunities.

“For our region, we’ve actually been seeing quite a bit of growth in the spring season,” said Reardon. “You start to have the melt, you have walking trails and some hiking trails. Some of the attractions in our area tend to open in mid- to late April and then early May.”

Ski areas “cut our season short by anywhere from two to four or five weeks, depending on the resort,” said Jessyca Keeler, president of New Hampshire Ski.

Keeler said that, besides the loss of revenue and jobs, “early season pass sales for next winter pretty much came to an abrupt halt.”

“Ski areas rely on that revenue during the spring shoulder season — it helps them maintain their full-time, year-round staff and start to get ready for their summer season and pay for capital projects,” she said. “People are still able to buy those passes if they want, but they’re not, which is no doubt related as much to the other economic costs of and fears related to the pandemic as it is to the resorts’ early closures.”

RRC Associates, a research firm based in Boulder, Colo., estimates New Hampshire could be looking at a $55.2 million loss due to the curtailed ski season along with the decline in season pass sales and the potential elimination of a chunk of their summer business.

“We’re hopeful that we will be able to resume operations in the coming month or two,” said Reardon. “It would be really good if we were able to open the doors for say July 1 and hit the ground running.”

And once it is safe to travel again, the Division of Travel and Tourism will focus its marketing efforts in-state and to nearby markets within driving distance, said Harnois.

In the meantime, the division is promoting Granite State Hampshire businesses through VisitNH.gov, which includes virtual experiences and takeout and delivery restaurant resources.

There is hope that people will embrace the idea of keeping their experiences close to home and supporting local businesses.

“A lot of people who normally might travel by plane to say Vail, Colo., to go skiing or head out to the islands, I think you’ll see people hold back on that and frequent places within driving distance of their hometowns,” said Roche. “That’s a trend that may increase tourism in the Lakes Region.”

Roche thinks people will be drawn to New Hampshire’s wide-open spaces, and fear of an ongoing seasonal virus or future crisis similar to Covid-19 may be a factor too.

“After 9/11, people were so panicked in the cities a lot of them bought a place where they could isolate in Vermont, New Hampshire, Maine — getaway places,” said Roche. “I think you’ll see a lot of people move out of the cities.”

He has already seen a trend of New York area retirees or people near retirement purchasing second homes that later can become a permanent New Hampshire residence, he said.

“They like the rural aspect, they like the quality of life aspect in New Hampshire,” said Roche, who also pointed to higher taxes in New York and New Jersey.

Pam Perkins, owner of and broker with Four Seasons Sotheby’s International Realty has seen the trend too — and not just in the New London area, where she’s based.

“I would say we’re seeing a brisker pace of interest right now than we typically do this time of year,” she said, adding that Four Seasons SIR is seeing increased business across its 17 offices in New Hampshire and Vermont.

“Our season starts Memorial Day weekend and we’re talking to various people all day about the area and options. And we’ve had a number of people look last year and reconfirm they really do want to buy.”

It’s not just retirees but families that are “maybe reassessing their priorities,” she said.

Roche said one recent buyer was halfway down the East Coast, on their way to Florida, when they noticed a listing online.

“They drove back from their halfway point as a result of the virtual tour and we wrote up the offer,” he said.