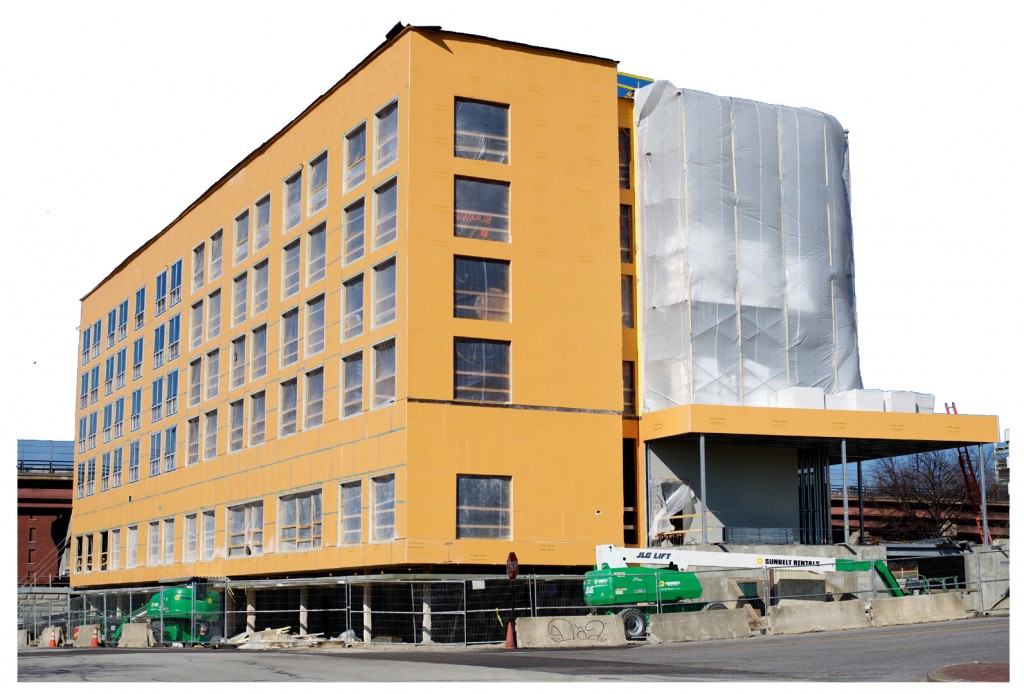 Tru by Hilton in the Manchester Millyard. (Photo by Karen Bachelder)

The frame of the Tru by Hilton in the Manchester Millyard is growing in stature.

“It’s been hard to get people to imagine it until very recently when, now, the building is sort of there and people are driving by and saying ‘that’s cool’, ‘oh that’s where it is’,” says Peter Flotz, managing member of LMG, the Florida-based developer of the Tru. “We should have heads in beds on Aug. 1.”

Across from SNHU Arena, a Residence Inn by Marriott is expected to be completed later this spring.

“I think you’re seeing a revitalization of that block,” says Anthony Librot, COO and CFO of AAM 15, the real estate investment and management firm in Burlington, Mass., that owns the property.

There hasn’t been a new hotel in Manchester in 14 years, since the Hilton Garden Inn was built in 2006. In 2020, the city will add two new hotels. So what’s driving the need for more rooms?

For starters, it’s not the New Hampshire presidential primary, although there usually is a flurry of excitement leading up to the big day. Hoteliers charge about $100 more a night (averaging $202) in response to the influx of visitors during the height of the campaign, taking up about 2,000 extra rooms and generating an additional $2.4 million in February 2016, according to the STR 2017 Trend Report.

But, said Kim Roy, general manager of the DoubleTree by Hilton Manchester Downtown, which houses much of the media, while “it was still a phenomenal piece of business,” “the media was in a situation where they were also covering the impeachment, the Iowa debacle, some of them were going to the Oscars, the Super Bowl had just been before that, so their resources were more limited than before. Typically, they get off the plane right after Iowa and everything heats up and it’s full steam ahead, but this time they were spread thin.” 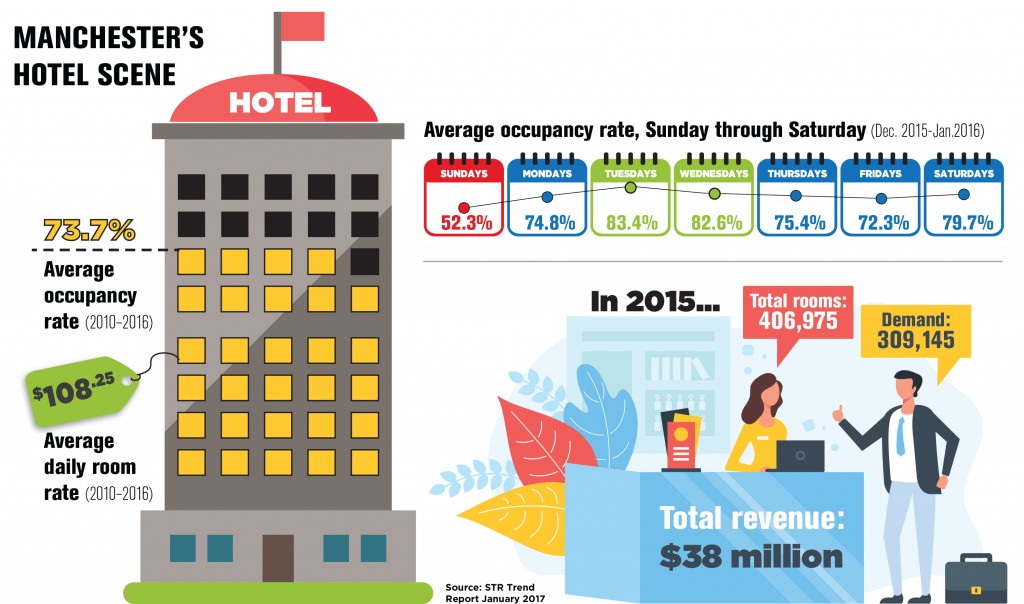 More regular than the four-year political entourage are the business clientele that pass through the DoubleTree, where Roy has worked for 37 years.

“Ever since I started in this industry, I remember Velcro being a great client, and they still are today. They have a number of foreign visitors,” says Roy. Southern New Hampshire University and Consolidated Communications also generate significant business.

And “there’s a lot of finance activity,” says Roy. “We do a lot of business with banks.”

The hotel underwent a comprehensive multimillion-dollar renovation in 2018 to become part of the Hilton brand, which was critical to attracting corporate businesses, says Roy.

“A lot of them have national accounts, and that’s why our brand is so strong. [Hilton has] relationships with these national corporations on a national level,” says Roy. “People like loyalty points, and the brand has a very strong loyalty program, so we find 68% of people that stay with us are Hilton Honors members and our occupancy has climbed with the change.”

On average, 70% of hotel rooms are typically booked, reflecting “pent-up demand” over the past decade, says developer Dick Anagnost, who worked with the former owners of the site of the Residence Inn by Marriott before it was sold to AAM 15. “We were underbooked to begin with. Manchester didn’t have enough hotel rooms and when the recession came, it slowed everything down,” explains Anagnost. 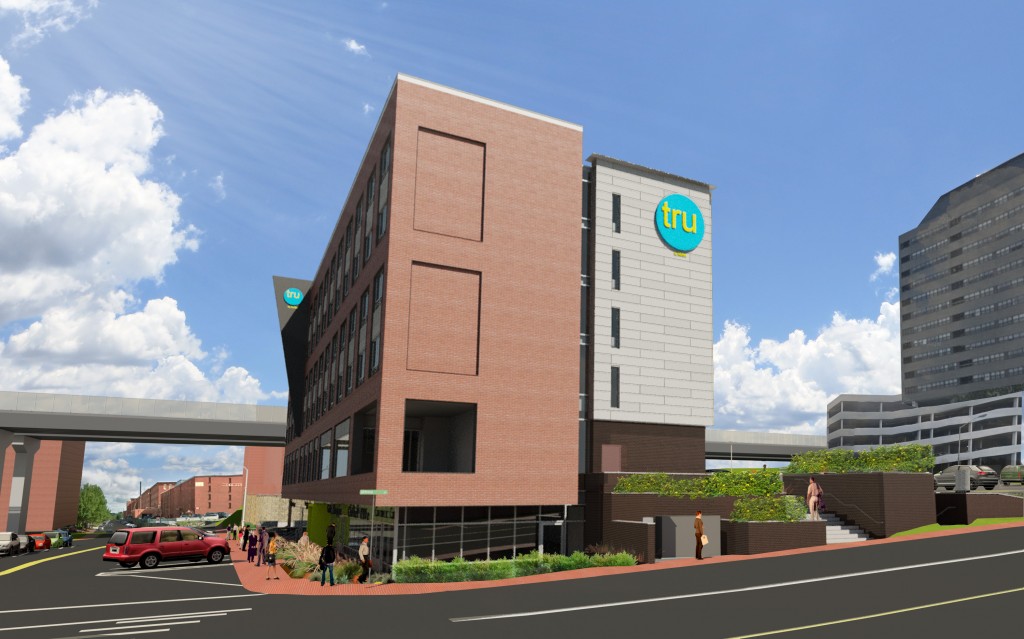 The Tru by Hilton in the Manchester Millyard is expected to open by Aug. 1, 2020. (Courtesy illustration)

Any thoughts of hotel development were halted until a few years ago.

“They were telling us there was enough latent demand in the city three years ago,” says Flotz of the market report prepared for the Tru by Hilton proposal. “We knew at the time the Marriott product was coming and we factored that in. And, at the time, we knew the new Hampton [Inn and Suites in Bedford] was coming, so all of that drove us to the brand we chose.”

The Tru brand attracts “the value user,” says Flotz. “It’s a smaller room; it makes it more affordable. The hotel is focused primarily on lobby spaces that are communal, that feel like co-working space.” It will also include commercial space with a prominent restaurant that has yet to be named until the deal is finalized.

“We find that the businesses in the Millyard employ a younger set than most, and so the Tru brand is a brand focused completely on the millennial user,” says Flotz.

“You want to get young people in your loyalty program so for the next 30 years they’re trying to get into your hotel to get points.”

The “explosive growth of technology companies coming to Manchester” as well as corporate banking, healthcare and local attractions will bring a variety of clientele to the Residence Inn by Marriott, says Librot. 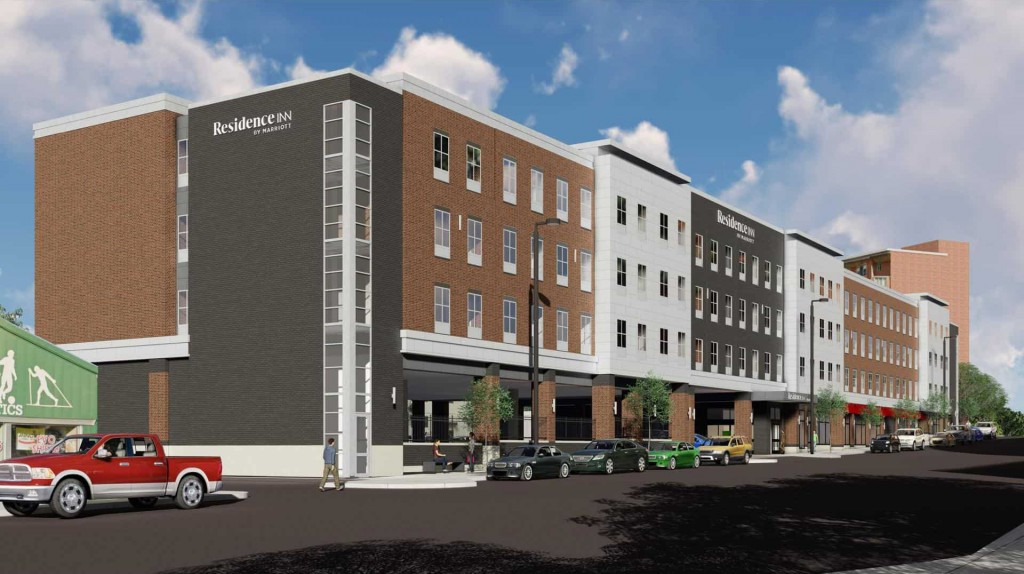 The Residence Inn by Marriott, across from SNHU Arena, will open spring 2020. (Courtesy illustration)

“It’s downtown — you get the tourism, you get the people coming in for a baseball game or an event at SNHU, but you also have the added benefit of the corporate traveler coming in during the week or for longer periods of time. A Residence Inn, which allows you a full-service kitchen, that’s a perfect situation for somebody who’s going to stay for an extended period of time,” says Librot. “Dartmouth-Hitchcock healthcare system, where they just took over Catholic Medical Center, that’s another major driver as they expand their footprint.”

“Manchester is one of the stronger markets in the state, and that’s primarily based on it’s got a good mix of business,” says David Roedel, business development officer for Roedel Companies, a hotel management and development firm, which owns the Hilton Garden Inn and La Quinta in Manchester. “I think the downtown market itself, the merging of downtown with the restaurants and the more residential and office space, it’s the place where hotel guests prefer to stay over the airport or Bedford. They’re doing work in Manchester, they prefer to stay downtown. We’ve seen that shift in the last 10 years or so.”

“From an investor’s standpoint, Manchester is where I want to be because I want to take advantage of the growth of the Manchester economy, the stability of New Hampshire in general, the tax environment, which is tremendous, and I have Boston in sight. It really gives a nice foundation to the market,” says Flotz. “The sun shines in Boston and it’s bright in Manchester too.”

The overflow of business from the greater Boston area into New Hampshire has Flotz considering hotels in other markets, such as Nashua or Derry.

But the surrounding markets to Manchester can be finicky.

Hotel rooms are utilized by Manchester-Boston Regional Airport traffic, with Southwest Airlines filling 1,000 rooms a month and American Airlines filling approximately 500 in that time frame. Delta and United Airlines did not respond by deadline.

But Roedel says housing airline employees is a double-edged sword.

“It’s typically a negotiation because they’re bringing you a lot of guaranteed room nights, which is great, but they’re also blocking out rooms that could potentially sell for a higher rate,” he says.

Roedel Companies owns Holiday Inn Express and Suites in Merrimack and Courtyard by Marriott in Nashua — investments made after the recession, when the opportunity came to buy the hotels and renovate them.

“The Nashua and Merrimack markets are not very strong. Their occupancy has hovered around 55%, 60%,” says Roedel. “It’s dominated by two large companies — BAE Systems and Fidelity. A lot of government business. And, in Nashua, we have four very large hotels built in the late ‘80s and early ‘90s, which really flooded the market with close to 1,000 rooms.”

“Overall the Concord market is small but steady at the lower end of hotel investment viability,” says Steve Duprey, president of Foxfire Property Management and The Duprey Companies. “We have no strong business demand but survive primarily on demand related to government and healthcare with some transient demand from people headed north on vacations.”

The Tru by Hilton off I-93 in Concord is expected to open spring 2020. (Courtesy illustration)

Duprey owns the Courtyard Marriott that contains the Grappone Center, Residence Inn by Marriott and Fairfield Inn & Suites Marriott, among others.

This spring, he will be opening a Tru by Hilton on South Main Street in Concord, off Interstate 93, with a T-Bones restaurant on-site.

Replacing an aging Days Inn, the 85-room hotel will add 5% more rooms to the Concord area, Duprey estimates, in addition to the 38-room Hotel Concord, which opened downtown in 2018 — the first new hotel in the city since the Residence Inn on Hall Street in 2009.

“We are what you’d call a luxury boutique hotel,” says Sean O’Kane, vice president and managing director of the Hotel Concord, which is managed by Bravo Zulu Hospitality Group. The downtown hotel is within walking distance of the Capitol Center for the Arts and State House, and has a private entrance to the independent cinema Red River Theatres.

“During the week, it’s mostly business travelers, professional people by and large, which is typical of any business-centered hotel,” says O’Kane. “Weekends do shift to more of a social market — local people wanting to get away in a luxury hotel for a weekend.”

Because the Hotel Concord isn’t a branded hotel, says O’Kane, “we have to rely on other travel agent websites such as Expedia and Hotels.com, because we don’t have a centralized reservation system that Marriott or Hilton would provide their franchise properties. We do a lot of local and statewide marketing, and frankly a lot of it is word of mouth.” 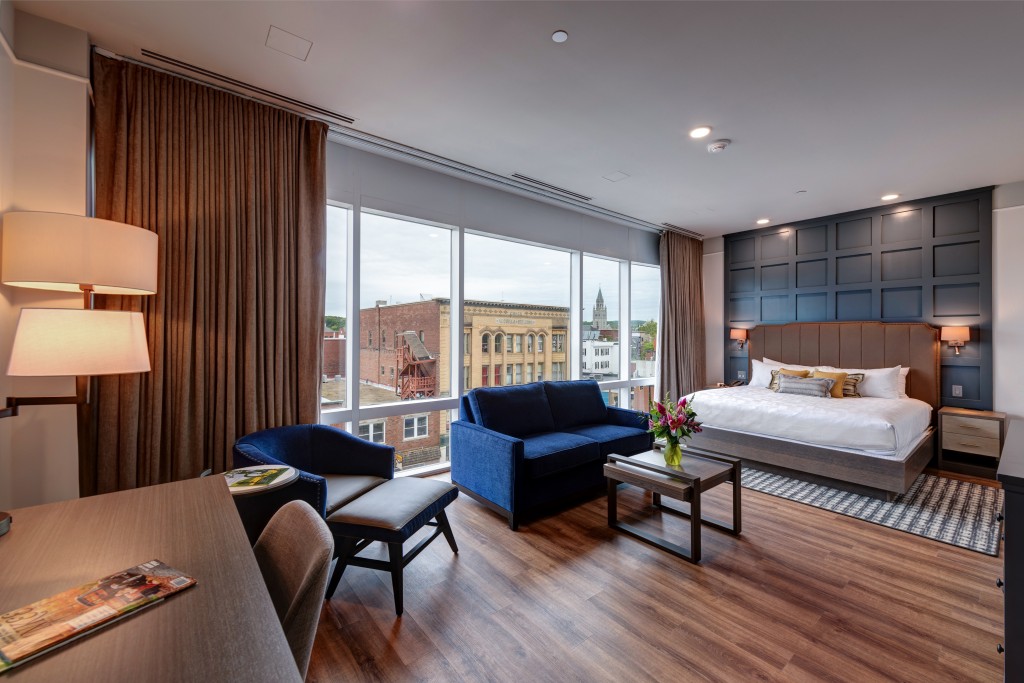 Opening in 2018, the Hotel Concord was the first new hotel in New Hampshire’s capitol since 2009. (Photo courtesy of SMP Architecture)

“Given that the overall occupancy rate in Concord has never reached 70% in the past decade, it makes for a very competitive market,” says Duprey.

And the competition extends past the city limits. “Concord and Manchester are essentially part of one market and we get some spillover from Manchester, particularly from businesses located in Hooksett, and we compete on rates with Manchester every day,” says Duprey.

“Of course they’re competition. They’re just a hop, skip and a jump away,” Roy says of Concord and particularly Duprey’s hotels. “They also have the Grappone Center, which is one of our biggest competitors from a catering aspect. So we always keep our eye on them.”

“For us, March and April — that’s our convention season,” says Roy. “I absolutely think there’s potential for growth for the hotels in the area based on how vibrant it is, and I think there’s opportunity for us to do things like citywide conventions now that there are multiple hotels downtown.”