Hope for Honduras in NH

Francia Guzman was a teenager living on the streets of Yoro, a town of some 6,000 people in the highlands of north central Honduras, when Bill Briggs, minister of the United Church of Christ in Franconia, met her in 2003. In a spate of gang violence, she was shot in the spine and was hobbled by a badly infected foot. 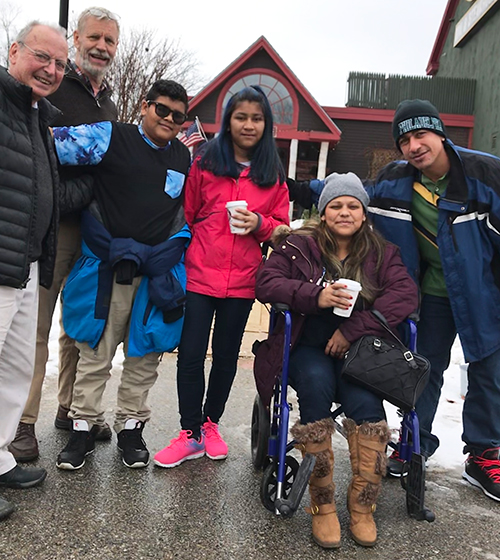 Briggs has pursued humanitarian and community development efforts in Honduras for the past 35 years, and in 2001 founded Honduras Hope, a charitable organization that originated in Newton, Mass., before moving its headquarters to Franconia in 2004. He arranged for Francia’s medical treatment and provided her with a wheelchair. In 2005, Francia gave birth to a son, Fernando, and married his father, Henry Cruz-Amaya. Meanwhile, Briggs, accompanied by volunteers from Honduras Hope, watched over the family, caring for Francia’s health and ensuring Fernando’s education, in the course of regular visits to Honduras.

Two years ago, Francia’s sister was murdered, leaving her daughter Nathalia in the care of her aunt.

“The family was living on the margin and at great risk,” Briggs said.

Last May, Francia called Briggs to say that she, Henry and the children, both now 13, had left Honduras to seek asylum in the United States. “‘Don’t come,’ I told her,” Briggs recalled. “I was worried for their safety.”

“We’ve never had a situation like this,” Briggs said. He stressed that the mission of Honduras Hope was to improve social conditions and foster economic development in Honduras in hopes of curbing pressures to emigrate. “All of our programs are designed to keep people in Honduras,“ he said. “I want Hondurans to visit New Hampshire and enjoy the lakes and mountains as guests, not as immigrants.”

Francia recounted their journey as Fernando and Nathalia downed eggs, pancakes and waffles at the Common Man Inn & Spa in Plymouth, whose owner Alex Ray and his partner Lisa Mure are board members, active volunteers and generous benefactors of Honduras Hope.

Briggs said that his partnership with Ray renewed a relationship reaching back half a century, when he worked at the bakery in Conway owned by Ray’s father.

“We reached the border on July 1,” Francia said, adding that their journey took five months. “Henry carried me,” she said, raising her arms and hunching her shoulders, “and pushed me.”

She said they were robbed of their money and papers during their trek. After spending 24 hours on the bridge crossing the Rio Grande at Laredo, Texas, Francia said an American journalist, moved by her disability, intervened, and they were moved to the front of the line.

After entering the country legally, the four were arrested, detained and separated. Francia and Fernando were detained in Laredo. Nathalia was held in Chicago. And after a month in Laredo, Henry was taken to a detention center in Folkston, Ga.

At once, volunteers of Honduras Hope set about reuniting the family, which Marianne Vaughan of Twin Mountain, who coordinated much of the effort, described as “insane work” involving a handful of lawyers, including some from the Southern Poverty Law Center and the American Civil Liberties Union, as well as the offices of U.S. Sen. Jeanne Shaheen and U.S. Rep. Annie Kuster.

She said collecting documents and completing paperwork, which required close cooperation from Honduran authorities, was especially challenging. “I must have faxed a hundred documents,” she said.

Vaughan said that Francia and Fernando were released in July and rode a Greyhound bus to Boston. Reuniting Nathalia with her aunt proved more difficult, but after three months in Chicago, where she lived in what she called “a normal house” and attended school, she reached New Hampshire in September. Finally, Henry rejoined the family in November, in an emotional reunion at Boston’s South Station captured by WCVB television. “They’re very lucky they’re all here,” Vaughan said.

The family is currently living with Vaughan in what she described as a small home.

“I’ve had a lot of help. I can’t say enough about the local community up here,” said Vaughan. “We’ve had so many contributions of clothes, groceries and other necessities.”

She said Francia, Fernando and Nathalia are enrolled in Whitfield Elementary School, where Fernando said he was awarded a trophy for his prowess as a soccer player.

Meanwhile, Briggs said Ray has been seeking to rent a home for the family in a town near the school. Doctors at Dartmouth-Hitchcock Medical Center have indicated that with further treatment and some surgery, Francia may again be back on her feet. And the arduous process of applying for asylum, which would entitle the family to reside and work in the United States, is underway.

As Francia watched the children eat, she said in Spanish, “Honduras Hope does very, very good work. Honduras Hope has changed a lot of lives.” Then, looking at Fernando, she said, “He is the son of Honduras Hope.”

Honduras Hope operates in Yoro, a town the size of Littleton in the highlands of north central Honduras, as well as two neighboring villages — San Jose de Machigua and Plan Grande, each numbering about 500 people living in fewer than 100 households.

San Jose, a four-hour uphill hike from Yoro, is in a national forest, where Briggs described the villagers as “squatters” raising corn, beans and coffee on small plots to which they hold no title. Plan Grande is on land allotted to the Tolupan Indians, about an hour from Yoro by foot. Neither village has an electric, water or sewer system, though recently 20 solar lanterns were given to the two villages to light the health clinic in San Jose and community center in Plan Grande.

Mure, who has been traveling to Honduras with Ray for the past six years, said that Briggs chose to work in the very poorest of the poor villages in what is the fourth-poorest country in the Western Hemisphere. Two-thirds of Hondurans live on less than $4 a day and a fifth on less than $1.25 a day, with poverty most dire in rural areas and among indigenous peoples. 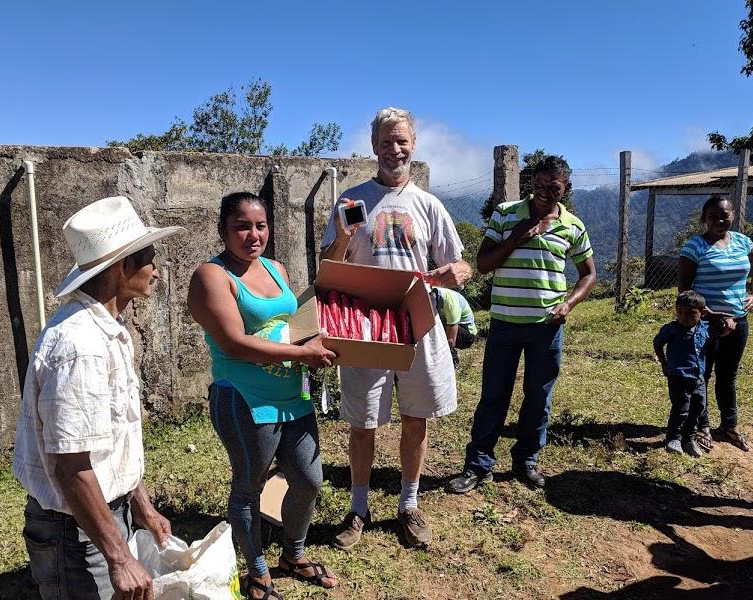 Common Man Owner Alex Ray has been visiting Yoro, Honduras since 2006. He is a board member and active volunteer of Honduras Hope.

“The Tolupan are the most marginal population in a marginal country,” Mure said.

There is little economic opportunity in the region, where logging and farming are the principal activities. Work in the corn, bean and coffee fields pays $2 a day, and doing laundry and housework for families in Yoro, even less. Homes are scarcely more than huts with dirt floors. The staple diet consists primarily of corn and beans, leavened by the occasional chicken, all cooked over a wood fire.

Honduras Hope has directed much of its effort to fostering health and education. The group built a health clinic in San Jose and supports a nursing team, which provides both preventive and urgent care to as many as 30 patients a day from San Jose, Plan Grande and another seven smaller communities nearby, Monday through Friday. The clinic also offers child nutrition programs, which provides three nutritious hot meals a week in both villages.

Mure said that before Honduras Hope opened the first elementary schools and supported the first trained teachers in the two villages, children received little or no education. In remote rural areas, children receive an average of just four years of schooling. Honduras Hope also built a boarding house in Yoro and created a scholarship program to enable students completing their elementary education to go on to high school in Yoro. Currently there are 65 students from the villages attending high school.

Honduras Hope also offers a scholarship program for students seeking to attend university. Briggs said the program has supported six graduates, and last year 22 students were enrolled in university classes or vocational schools, among them two women — both Tolupan from Plan Grande — studying medicine. Other students are pursuing degrees in nursing, engineering, business and agriculture.

Ray said when he began visiting Honduras in 2006, educational opportunities were limited and schools were poorly supported. There was a vocational school in Yoro, originally built by USAID, known as CEVER, with woodworking, auto repair, welding and a machine shop. Ray constructed and equipped a culinary and hospitality school, with a commercial kitchen and spacious dining room, which he said has become self-sustaining by serving as a popular venue for hosting events in the school and community.

In 2016, Vaughan, herself a hairdresser and beautician with a salon in Littleton, added a fully equipped beauty school to CEVER, featuring a program leading to certification. The program is run by Supaya Benaga from Plan Grande, one of the first from her village to attend university. After she lost her husband to a traffic accident, she turned to hairdressing and cosmetology and now teaches some 40 students.

Other community development efforts in the villages include a community center in Plan Grande, which houses several micro businesses — sewing and jewelry cooperatives and a thrift store. Tolupani women have revived the art of weaving baskets from pine needles, which are sold in retail outlets abroad, including stores in Littleton and Meredith.

Briggs said that Honduras Hope operates on an annual budget of about $100,000, consisting almost entirely of private donations, and relies solely on the efforts of its volunteers, who make four trips to Yoro and the villages each year. Briggs said the group is working closely with the patronatos, or councils, to bring electricity to the villages. Groups have included dotors and dentists along with others who have undertaken projects to improve housing conditions, water quality and agricultural production.

“Our motto is Juntos Todo Es Posible — Together Everything is Possible.”