Experts tackle issues on ‘Work of the Future’ 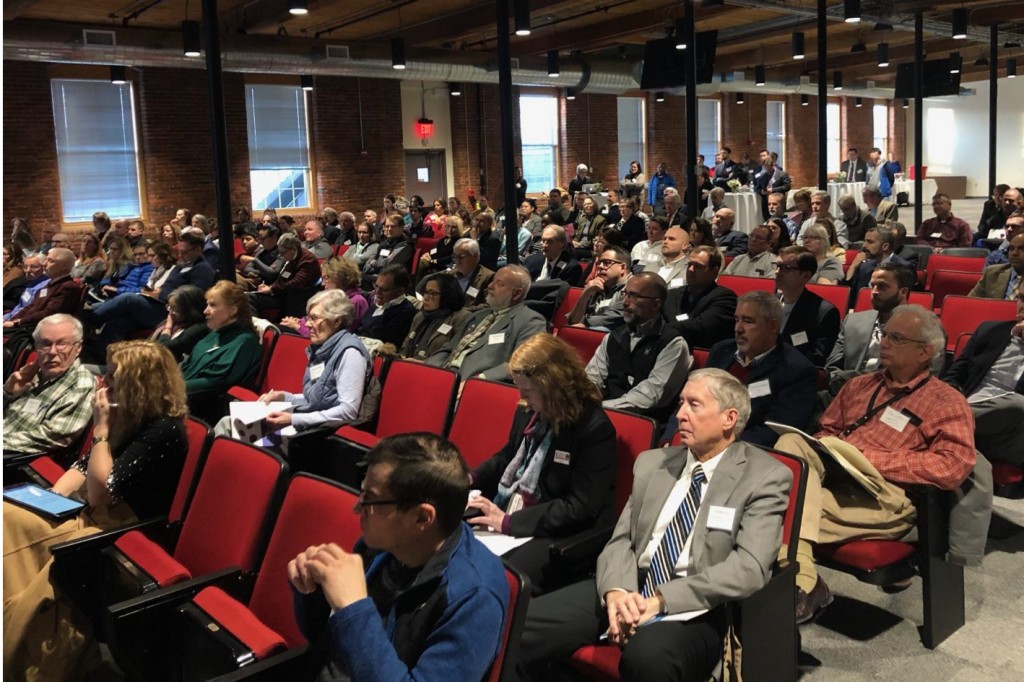 There was a big turnout Feb. 5 to discuss the ‘Work of the Future’ in New Hampshire, an event hosted by Dean Kamen, founder of DEKA Research and Development. (Photo by Paula Tracy)

Academic, business and government leaders began a conversation for the new decade Feb. 5 on what the future of the job market will look like in New Hampshire.

More than 100 people came to the Millyard in Manchester — where manufacturing essentially began in New Hampshire more than 100 years ago — to discuss how the state will grow, change and move forward as the population ages.

Issues of finding labor to fill jobs in the state, replacing some work with automation, and strategies to develop education and opportunity for the future were among the core topics discussed at “Work of the Future” in New Hampshire.

The state Department of Business and Economic Affairs, Massachusetts Institute of Technology and the Community College System of New Hampshire convened the meeting as a way to begin the conversation.

Dean Kamen, founder of DEKA Research and Development, who hosted the gathering, said he has about 800 engineers and about 109 engineering job openings.

“The biggest concern is finding the people,” Kamen said. The backdrop to that, he said, is the fear among some that robotics is going to wipe out jobs.

“The bulldozer did put the ditch-diggers out of work,” Kamen said, but it enormously expanded the number of holes that could be filled. “People have an insatiable appetite for new and bigger stuff,” he said.

There is room for both. “While technology is moving faster and faster, education isn’t,” Kamen said. “Kids need project-based ways to see how exciting tech is.”

Elisabeth Reynolds, executive director of the Massachusetts Institute of Technology Work of the Future Task Force, said that, in an effort to understand the concerns for the future, MIT began a study on the relationship between technology and work about a year ago.

She outlined some of the findings from a report published last fall. The insecurity of workers, she said, is based on real facts that show productivity outstripping the past and compensation stagnation for about the past 40 years.

This concern is “legitimately based” with the state losing middle-skilled jobs. However, there are huge gains for the high-tech end, she said.

One thing we can be certain about, Reynolds said, is the demographic trend. New Hampshire is aging and it does not have as many young people.

“What we will have in the future is a scarcity of workers,” Reynolds said. “Automation may be our friend,” she said. “We need to be looking ahead to see where technology can help us.”

The state should focus on those coming out of high school and train them for healthcare, production and trades, and reinvigorating technological leadership, Reynolds said.

The mix of business and academic leaders took a stab at issues related to fixing institutions to meet the needs of employers and the development of career ladders in various industries. Schools and community colleges do not connect well, said Osterman of MIT.

“The role of government is to be the convener, to help connect them,” Osterman added. “There’s a set of connections that need to be made.”