‘Everything is in a state of flux’

New NH Department of Energy struggling to find its footing 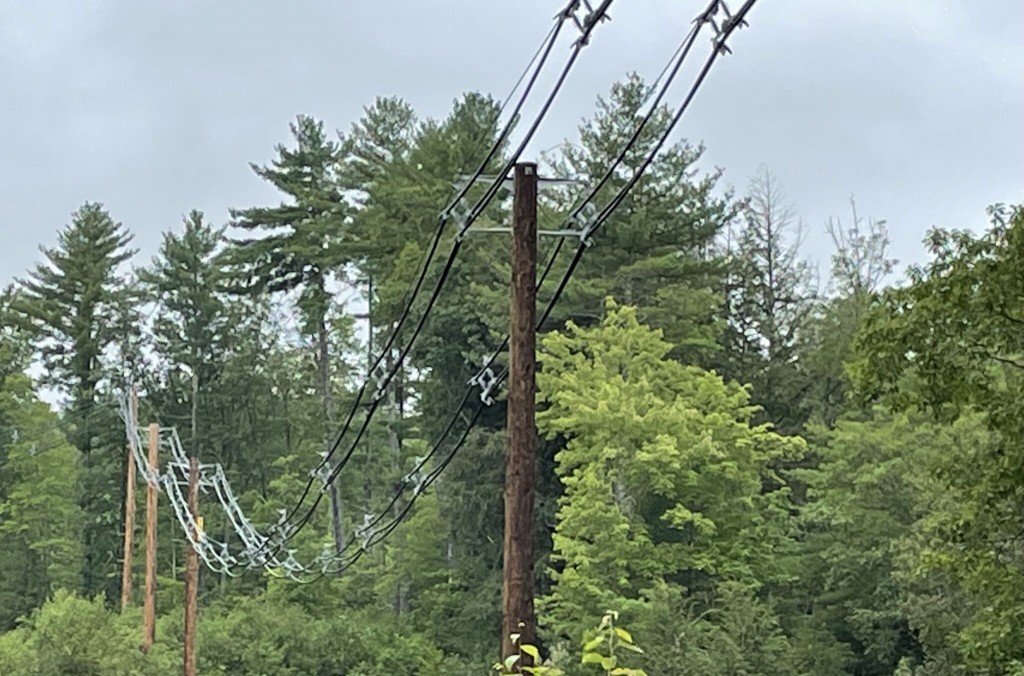 The New Hampshire Department of Energy was created with the goal of establishing a ‘home’ for energy policy in state government. (Dana Wormald/New Hampshire Bulletin)

On July 1, a new department was born. Proponents of the reorganization that created the Department of Energy had high hopes that it would help increase transparency and accountability.

The vision was to create a “home” for energy policy in state government by pulling some of the energy work that used to happen at the Office of Strategic Initiatives and attaching administrative components of the Public Utilities Commission – a government entity that operates almost like a court – and the Site Evaluation Committee, which is responsible for overseeing energy facilities.

Now, just over one month in, a top leadership position at the new department has yet to be permanently filled, and those who work with the department describe confusion, a hiring crisis, and ongoing delays of important decisions.

“We have seen no movement on things like the triennial energy-efficiency plan that we’re waiting on,” said Sam Evans-Brown, the new executive director of Clean Energy NH.

That’s a problem that some proponents of the Department of Energy hoped it would resolve. Evans-Brown’s predecessor, Madeleine Mineau, had been optimistic that a new department would be an improvement; in April, she told the Bulletin that things couldn’t get worse.

That’s bad news for the nonprofit’s priorities – advocating for issues related to clean energy – but also for contractors who work in clean energy and for ratepayers who are missing out on the economic and climate benefits the plan would have delivered.

Some programs, like a popular home weatherization program in Concord, have already been halted because utilities had planned on funding that was supposed to start at the beginning of 2021. Now, eight months into the year, the utilities commission has failed to make any decision about the program.

In July, the utilities filed a letter informing the commission about “a growing number of challenges faced by the NH Utilities, our vendors, and our customers under these temporary conditions.”

“While the NH Utilities continue to operate the programs under the temporary Order, available solutions to the problems faced are becoming increasingly less effective,” the letter continues. Critical deadlines have already passed for a few initiatives.

Other major dockets are held up, including a grid modernization decision that dates back to 2015, a statewide energy data platform, and a docket on the costs and benefits of net metering.

Seth Wheeler, a spokesperson for New Hampshire Electric Cooperative, said energy-efficiency programs are currently funded at 2020 levels, but there is concern that funding for some of the programs will run out before the end of the year.

Evans-Brown blamed the paralysis at the utilities commission on the creation of the new Department of Energy. Others say that while the reorganization doesn’t excuse it, the paralysis goes further back.

“The Public Utilities Commission has been in a state of inaction and apparent paralysis for quite some time now,” said Consumer Advocate Don Kreis, whose office is now administratively attached to the Department of Energy.

He said the commission is supposed to be an order “factory,” churning out decisions about matters that are brought to it by those under its jurisdiction. The fact that the “factory” has been at a standstill is a significant public policy crisis, according to Kreis.

“When the PUC simply decides nothing, that is a serious and troubling abrogation of regulatory authority and responsibility,” he said. And the creation of the Department of Energy does not justify ongoing inaction, Kreis said.

A major changeover in employees is contributing to some of the confusion.

“The problem really has just been that, you know, they had to restaff the entire PUC, which I don’t think anyone really foresaw that we’d have essentially a whole summer of inactivity at the PUC because of the creation of the Department of Energy,” Evans-Brown said.

PUC staffers were moved to the Department of Energy. Then, looking to fill out their ranks, the commission recruited two analysts from the Office of the Consumer Advocate, leaving Kreis with what he called a “hiring crisis.”

“I’ve lost my entire professional staff,” he said. The utilities commission recruited two analysts away from his office, and Kreis is also hiring a new attorney, which he said was unrelated.

Kreis said the personnel issue was “like a divorce.” What used to be just the utilities commission has now been split up between the two agencies, so the commission is now much smaller.

And others have decided that rather than go through a major transition, it was a good time to retire.

“What we’re seeing is between people leaving to go to Energy and people retiring because this might be a good time to do it, they’re short-handed,” said Jim Monahan, president of the Dupont Group, a consulting firm that focuses on state government. He attributed some of the “transitional challenges” to staffing.

“And now the PUC has had to hire up, which has just meant that there have been a lot of delays, technical sessions have been rescheduled, and the dockets that have these really important decisions pending just continue to pend,” Evans-Brown said.

“There’s a lot of confusion and uncertainty here in the Walker Building as people figure out what the heck they’re going to do,” Kreis said.

‘A lot of moving pieces’

“Those duties fall to interim energy commissioner Jared Chicoine, who is focused on ramping up the department, and at the moment, is busy doing just that,” said Ben Vihstadt, communications director for Sununu, in a written statement.

“There are a lot of moving pieces involved in this effort, so Jared is happy to speak later on once all the pieces are in place,” Vihstadt said, adding that he believed that would be within the next two weeks.

Hiring for the top position at the new department may be a challenge, with only a handful of people in the state qualified for the role. Of those who are qualified, many would likely be taking a pay cut if they accept the job, which would pay between $89,347 and $124,579.52.

Chicoine was previously the commissioner of the effectively dissolved Office of Strategic Initiatives. The interim appointment will expire at the end of August.

It turns out that not having qualified staff on hand is a costly problem. Chicoine requested a contract with a Boston-based consulting firm authorizing the department to spend anywhere from $295 to $575 an hour for outside consultants.

Bailey’s position as commissioner is now vacant as well. Her term expired at the end of June, and she was not reappointed.

Monahan said that historically it has been a challenge to fill the commissioner role at the utilities commission.

During his tenure as interim commissioner, Chicoine has made a few nominations for open positions. Chris Ellms was confirmed as the deputy commissioner in a 4-1 vote at the Executive Council meeting last week.

Councilor Cinde Warmington, a Concord Democrat, was the sole vote against the confirmation. She said she voted against Ellms’s nomination because he lacked the relevant experience.

“While Chris Ellms may have certain talents, he has no real substantive knowledge of energy, and his background is political,” she said. “He just simply doesn’t have the knowledge or experience, in my opinion, for the position.”

Ellms’s resume cites an 11-month stint as energy adviser at the Office of Strategic Initiatives from 2017 to 2018. He also highlights his involvement in pushing the Department of Energy proposal forward through the budget process while working as legislative director for the governor’s office. The deputy commissioner term is four years, and the salary is $102,336.

Other than that, he’s worked as a deputy campaign manager for Friends of Chris Sununu and as a policy adviser for the governor’s office.

“If you really don’t believe in the mission of an agency, then one way to undermine it is to appoint unqualified people,” Warmington said.

“If you have a particular policy perspective that you want to make sure is carried out at an agency,” she said, “you can put political people in there that are going to simply forward your agenda. And that’s the concern.”

Monahan said Ellms’s appointment didn’t come as a surprise, and that Ellms has “been around energy issues for a number of years.”

And Ellms had been a point of contact in the governor’s office when it came to energy issues, according to Monahan.

“I think the whole reason he advanced the DOE was so there could be more executive say,” Monahan said.

Sununu has made something of a habit of appointing his staffers to top positions in government agencies. John Formella was Sununu’s legal counsel before he was appointed to be the attorney general in March. And D.J. Bettencourt was Sununu’s policy director before his appointment as deputy commissioner of the New Hampshire Insurance Department. That makes Ellms the third of Sununu’s personal staffers to receive such an appointment.

Also last week, a nomination was submitted for the director of the Division of Regulatory Affairs. The nominee, Tom Frantz, does appear to have deep knowledge and experience in the field, having worked at the Public Utilities Commission since 1989. From 1994 to 2001, he was the chief economist at the commission. And from 2001 to the present, he has served as the director of the commission’s electric division, where he’s responsible for rates and regulation. Monahan called it a “nod to institutionalism.”

Over at the commission, though, there are still concerns about losing that history.

“All of the traditions and norms, practices, and assumptions that govern practicing in front of the old PUC are thrown out the window, and so everything is in a state of flux,” Kreis said.

Both Evans-Brown and Monahan said the transition could have gone differently, if it hadn’t been so abrupt.

“It didn’t have to be this way; you could have created a Department of Energy in a more seamless fashion. And we could have made some progress over the summer instead of, you know, just hanging out and watching these important dockets languish,” Evans-Brown said.