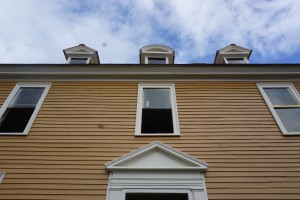 The Lear house, first built in the 1730s by Captain Tobias Lear III, was the birthplace of Tobias Lear V, who served as personal secretary to George Washington for over 14 years. Washington himself visited the house to have tea during his 1789 Northern Tour.

Over the last century, the house fell into disrepair – it was last occupied in 1915 – and Foster, a Washington, D.C., resident bought the property in August 2019 from the Wentworth-Lear Historic Houses Association, which had owned it, together with the adjacent Wentworth-Gardner House, since 1940.

When the restoration is completed, Foster intends to offer the home as a private inn for “an unparalleled lodging experience in New Hampshire’s most historic city,” he said. He said the eight-room house will be “authentically outfitted much as it was in the late 18th century, but with every modern amenity right at your fingertips.

He also has agreed to reserve time to show the house to the public in connection with ongoing tours of the Wentworth-Gardner House, a neighboring property.

Foster – who previously rehabilitated Wilton House, a 1763 Georgian house in Hartfield, Va., that is now a short-term vacation retreat – said he has gathered a “dream team” of restoration experts, architectural historians, researchers, and specialists to undertake the project, which is being overseen by Historic New England.

Heading up rehabilitation and preservation work is John Schnitzler, a master carpenter with over 40 years of preservation experience, including several projects at Strawbery Banke, the nearby outdoor history museum in Portsmouth. “I knew that John’s hands-on expertise and deep knowledge of Portsmouth’s historic houses were without equal,” Foster said, “but now the proof is in the pudding. John has a masterful touch, whatever the issue.”

The rehabilitation work is scheduled to wrap up in July 2021.